It's been an embarrassingly amount of time since Andrea from The Train to Crazy sent me a box.  She calls it The Mystery Box (dun, dun, dunnnnn) that she fills with fun fabrics and sends to different sewing bloggers to see what they do with it. 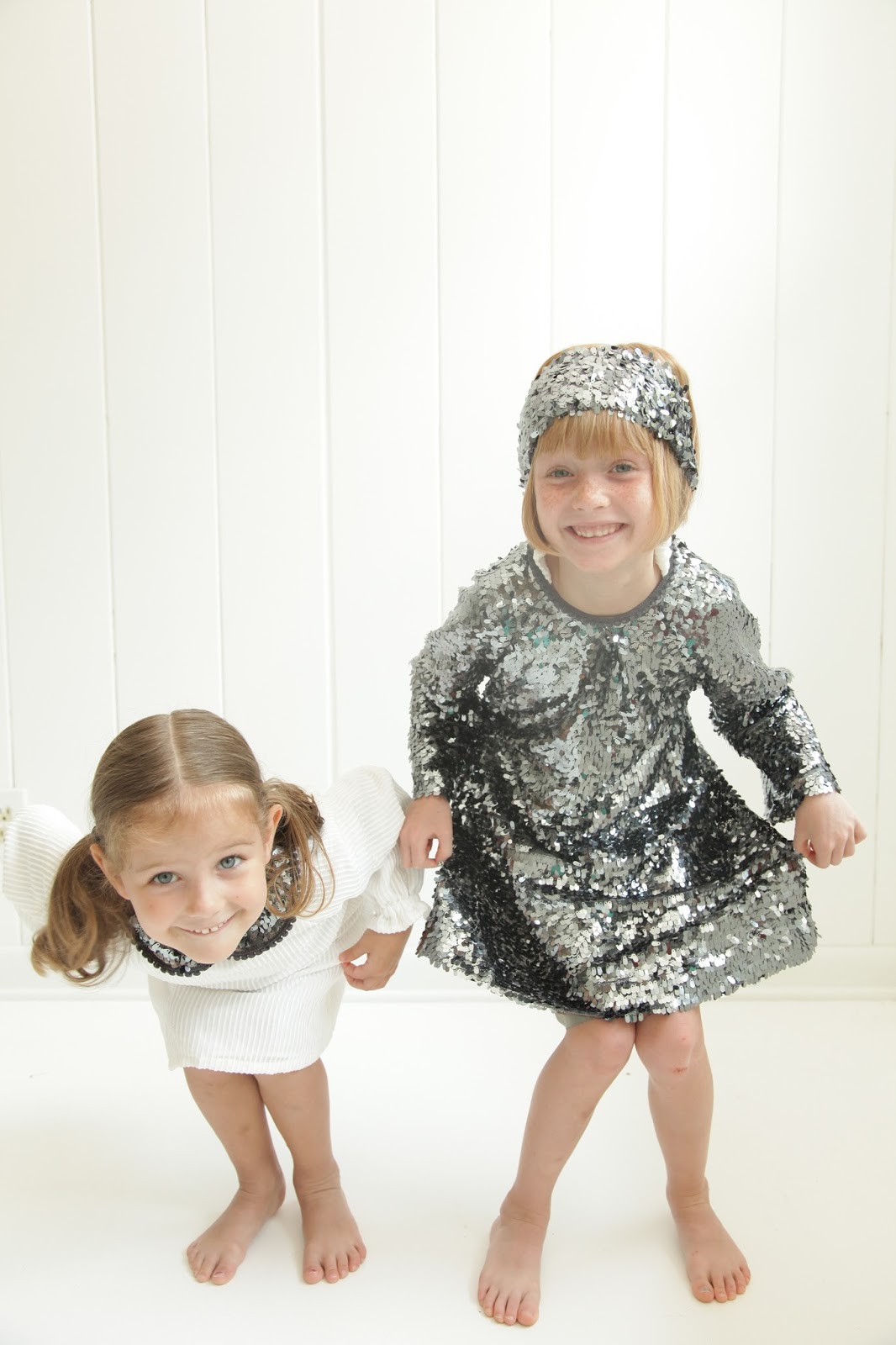 One fabric was this charcoal sequin fabric.  I decided I could use it for a Sunday dress for one of my girls and a coordinating dress for another one of my girls.  Kill two birds with one sequin.  Or a few hundred thousand.  I made a sequin collar for Clover's dress, but there was something not quite right.  It needed something... 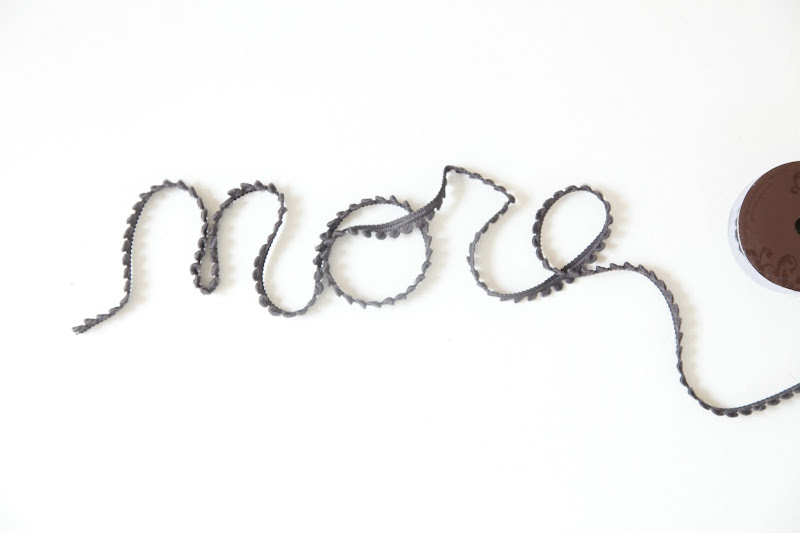 ...more.  I was at Hobby Lobby and spied some trim that turned out to be just what I needed. 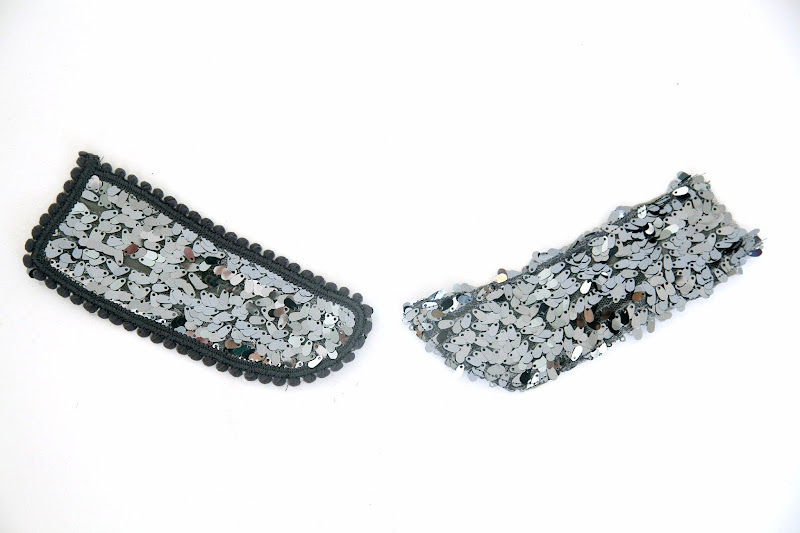 And of course a headpiece that can be worn by either girl.  Whoever gets up first in the morning ;) 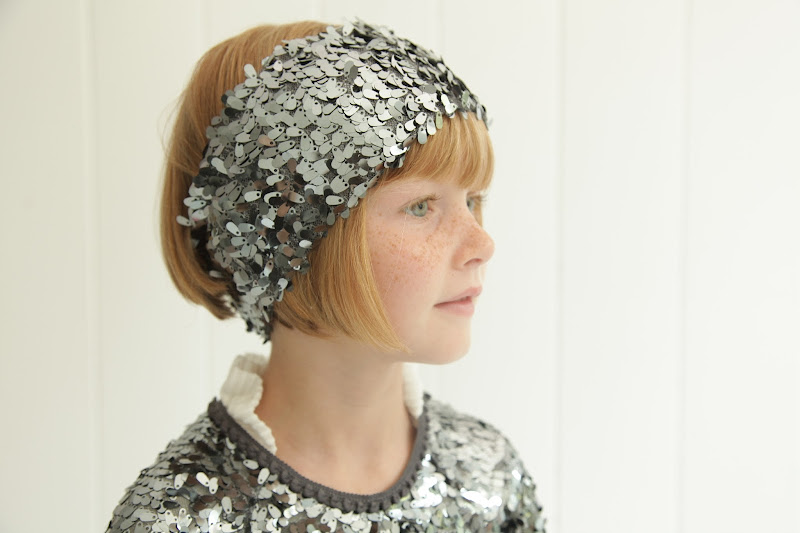 I used a vintage pattern that I've used several times before, like on Clover's Vote Dress.  It's been good to me, that pattern. 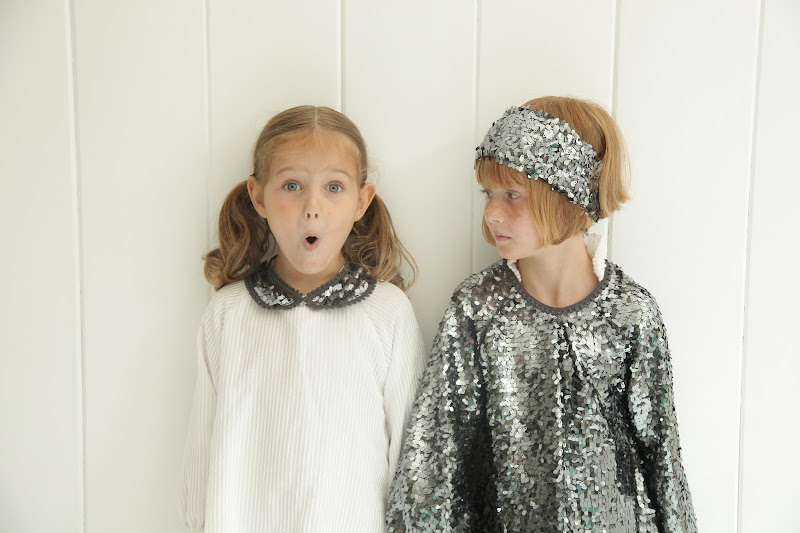 I included an inverted pleat on the center front of Azure's and left the sleeves without the elastic and casing.  Clover's I pretty much followed straight up. 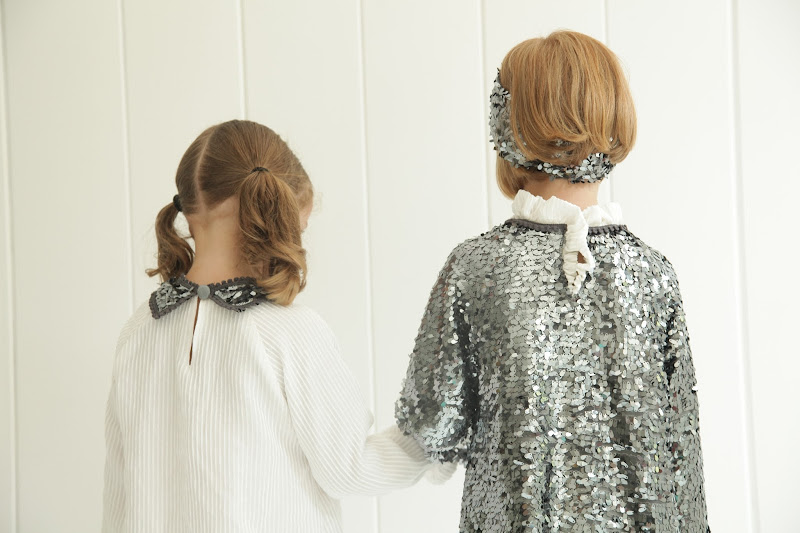 Her collar doesn't lay perfectly flat, probably the only thing I'd change on it. I guess they hadn't intended sequins to be used.  ;) 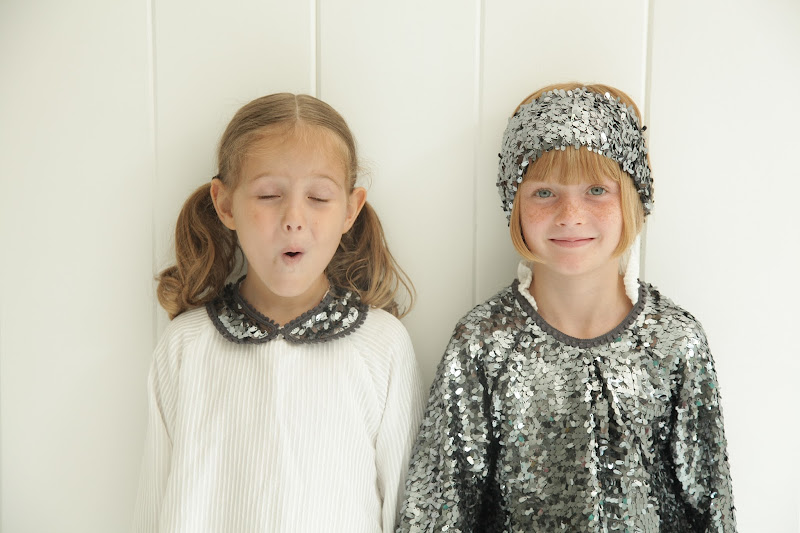 I may draft some of my own and change them, as I just sewed them along the edge of the dress neck, they're easily removed.  But for now, they're fine. 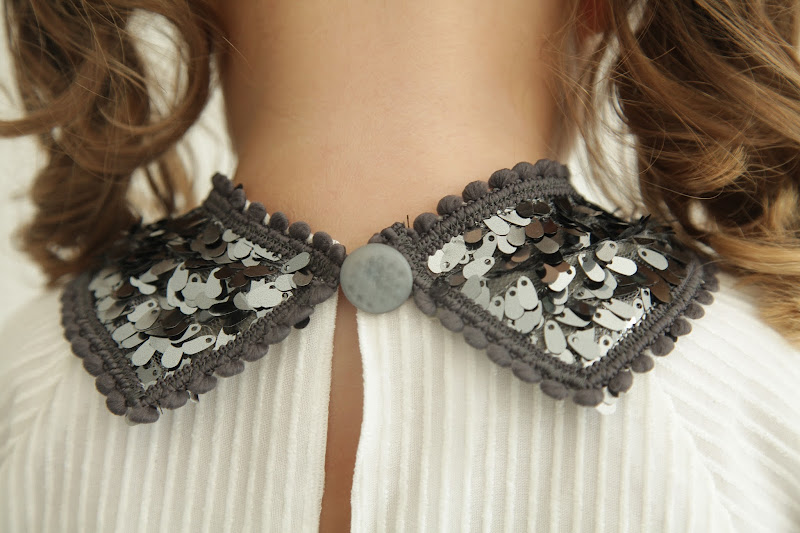 Doing a photo shoot with these two monkeys is not as easy as it looks.  Or maybe it doesn't look easy, which would be accurate. 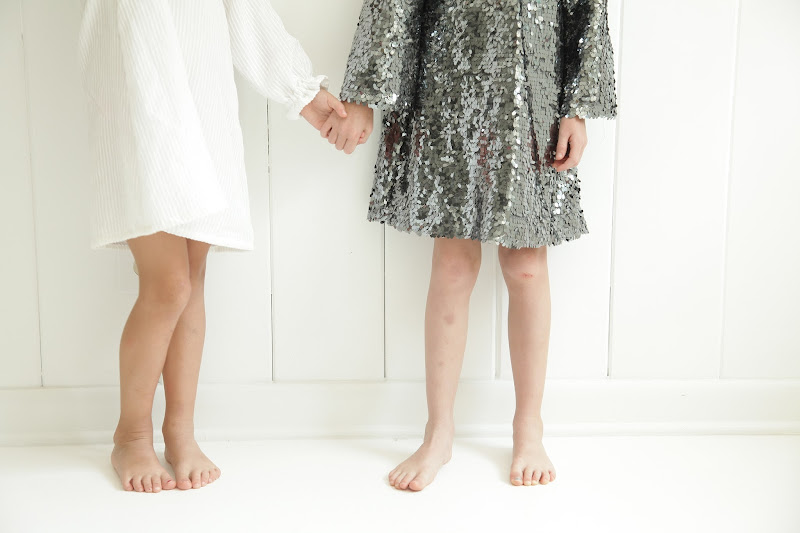 I tell them to turn around and they turn the wrong direction or in an entire circle, sneeze, or simply give me a goofy look. 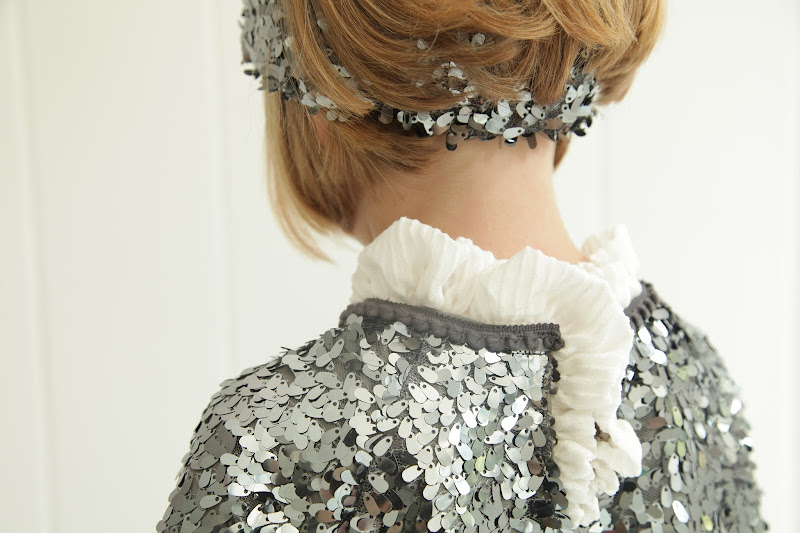 I tell them to step left and they step right (or maybe my directions are backwards?) 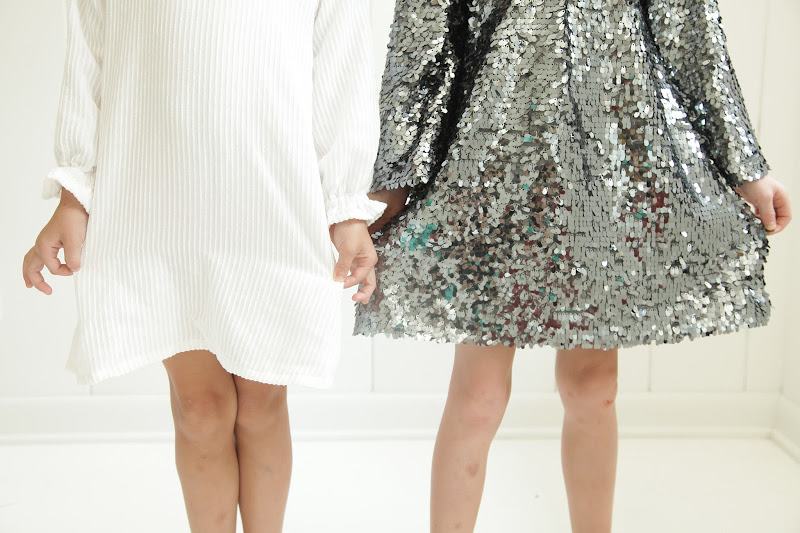 But I kind of like the candid nature of little kids.  They are rarely stiff and just show their personality naturally.  Also, I love the juxtaposition of the sequins and scraped knees. 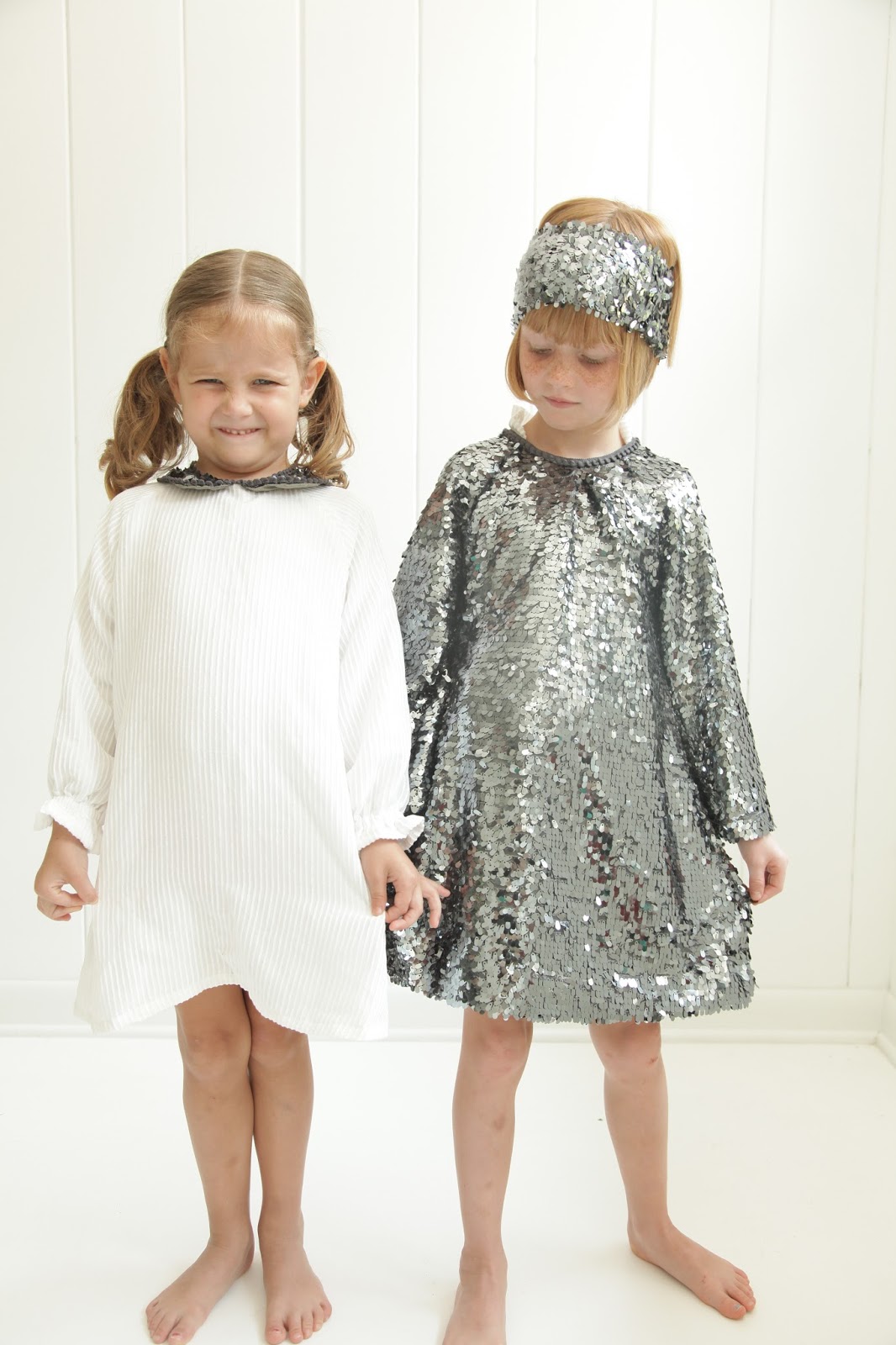 As I was sewing these, I had the harsh realization that sewing for little girls is rapidly coming to a close, as they turn into tweens and then teenagers and then onto wedding dresses!  But, I'm getting ahead of myself.  They're still just 4 and 6.  All the more reason enjoy these monkey years of silliness. 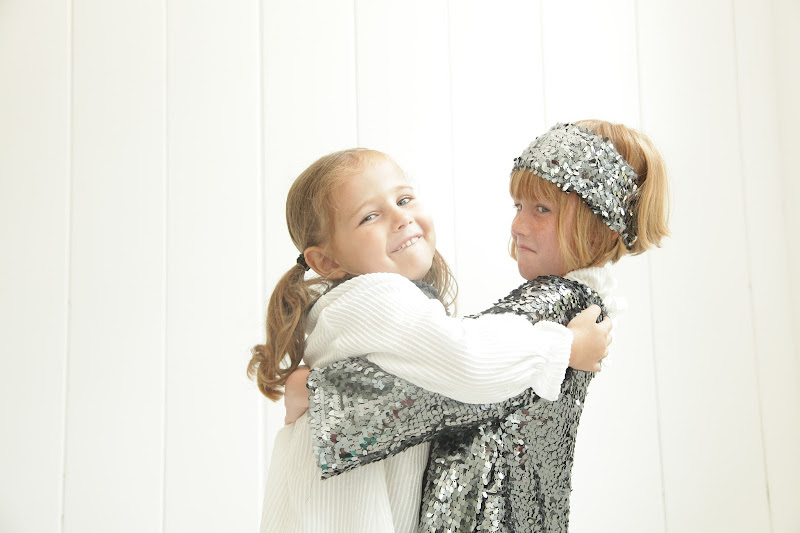