I have to admit that I haven't been in the mood to post lately.  Have you noticed ;) and do you ever get in such moods?  But when I don't post anything for several days my family starts to worry, well my mom at least.  So I'm posting to tell everyone we're doing swell.  We were whisked away to celebrate His life over the weekend to Jekyll Island where we have somehow started a tradition of going there over the Easter weekend.
Jekyll Island 2009
I had a glimpse, though, while we were gone and while I looked through year's past photos.
Jekyll Island 2010
Ever get those glimpses?  Of course you do.  We all do.
Jekyll Island 2011
It's almost like standing with your nose touching a Seurat and thinking wow, that must have taken forever to do all those dots!  Who would ever take the time to do all those?
Clover 2009
And then you decide to take a few steps back and behold the masterpiece, in progress or completed, and in a museum. 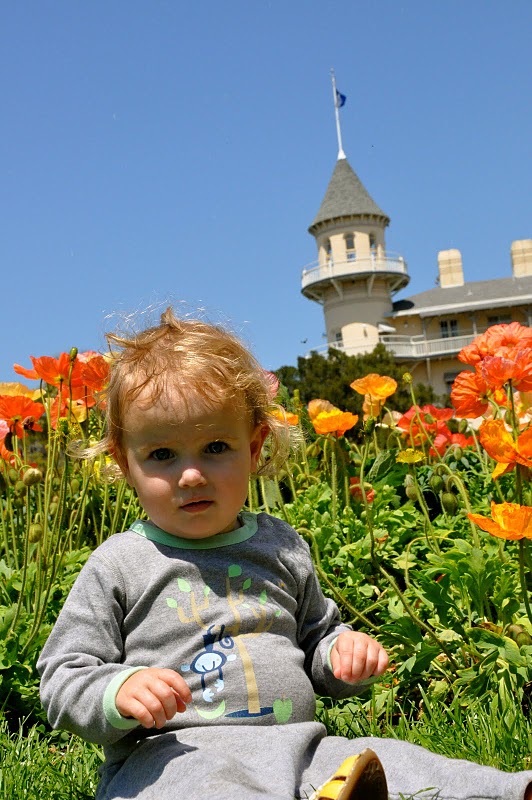 Clover 2010
Clover 2011
It usually happens when the baby dills are sleeping and the house is quiet enough to hear the fridge making the oddest creaking noises.
But this time the glimpse of the masterpiece came with the activity of day and noise of 5 little girls who were thrilled to be riding bikes all together as a family for the first time.
I saw Divine in the front, leading the dill pack, ever urging us to go faster and to get going when we stopped to collect bamboo for Olive's class, or to gaze at the horses trotting by.
That's when I realized we've had her for 1/2 the amount of time that we most likely will [did that make sense?]  Have I added enough dots and in the right shades?  I panickingly [no, that's not really a word] ask myself.
These baby dills keep us laughing with their scenarios...
The diaper stage seems to be slowly coming to an end with Clover who requests the toilet on occasion, and with that comes relief and sadness.
...this one where they were hiding in the hollow of a great tree in the middle of a thunderstorm.
Have we taught them what they need to know?
Will they remember the times we laughed [over and over] at their silly jokes and bought the everything-artificial-chocolate-things for their lunch because we wanted them to know we listen to their desires, even if we don't always act?
Our reservations somehow got mixed up, so they gave us our very own dining room at the hotel
I keep adding those little dots, sometimes with less than a cheerful heart, but having the glimpse of this masterpiece I am creating gives me the stimulus that I need to know each dot counts.
It reminds me to take time to nibble on these cheeks more than she likes, to give in more than I do, and to just take a little more time choosing my palette and hues when making those dots.
Created by No Big Dill