I failed to properly introduce the travelers yesterday. 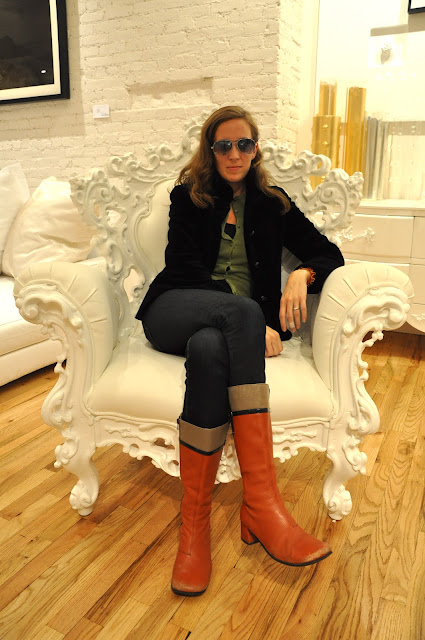 The accessorizer:  I packed a tiny carry-on suitcase only half-full.  I wore the same pants and boots and blazer, just changed things up with just a fresh top [yes, undies, too!] and accessories.  I was happily mistaken as a native as lost wanderers repeatedly asked me for directions.  I gave them wrong directions.  No, I didn't. 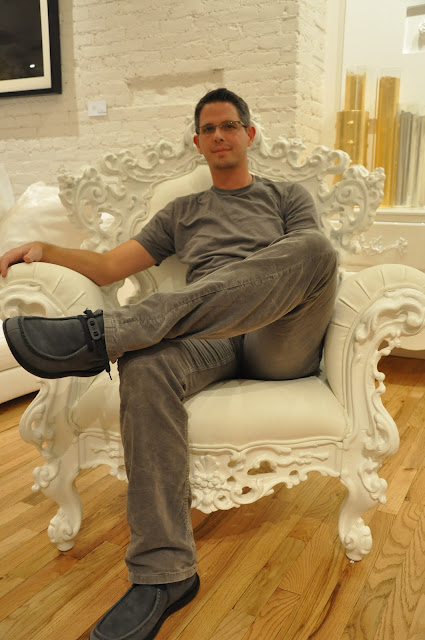 The monochromatic man:  had a wallet full of $2 bills for tips.  Watched his wife try on hats, shoes, and helped pick out buttons and negotiated on my fabric purchases with the sales people.  Is that the perfect anniversary gift, or what. 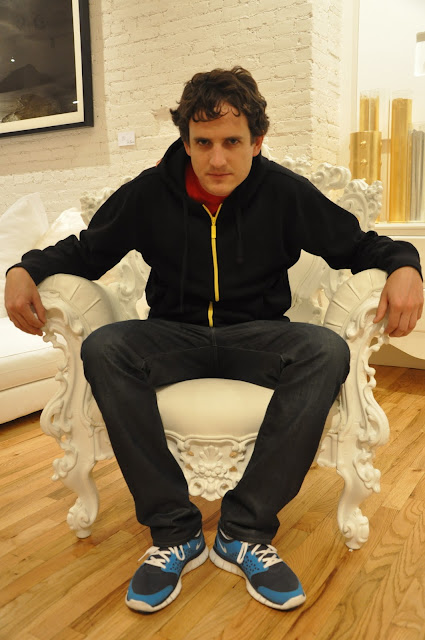 Mr. T:  Jacob, my younger brother by 18 months.  My mom says we always got along swimmingly as kids.  Happy to say nothing has changed.  He entertained us each day with his clever t-shirts and his iphone full of cool apps to find the closest subway and keep our boredom at bay with yahtzee during intermissions and culinary courses.  And so self-sufficient.  Perfect traveling companion. 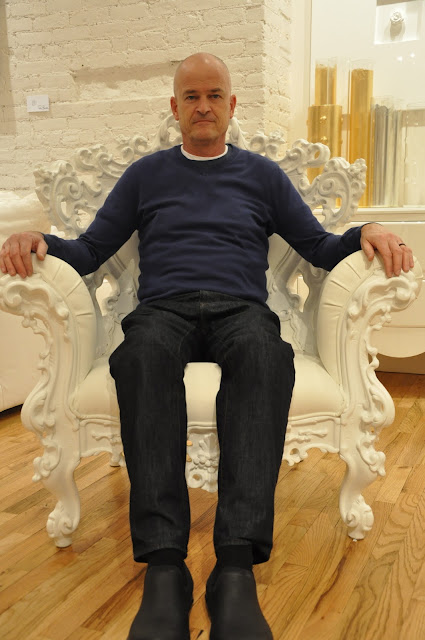 Mr. Clean:  Carried his wife's bags post purchases and wasn't afraid to get in trouble by the museum security guards, or tell the guy on the street selling signs that his prices were significantly higher than another's.  Pretty much, he tells you like it is. 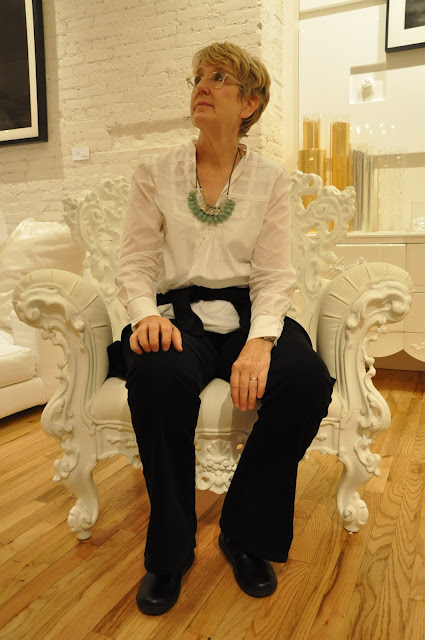 The ultimate navigator:  We'd look to her on the crowded subways to tell us when to get on and off.  She'd peer at her map and give us the straight shot to our desired location every single time.  If she left us alone we would sometimes take the same line up and down and up and down until we would get off and walk.  You want to know where to go in NY?  Ask these two. 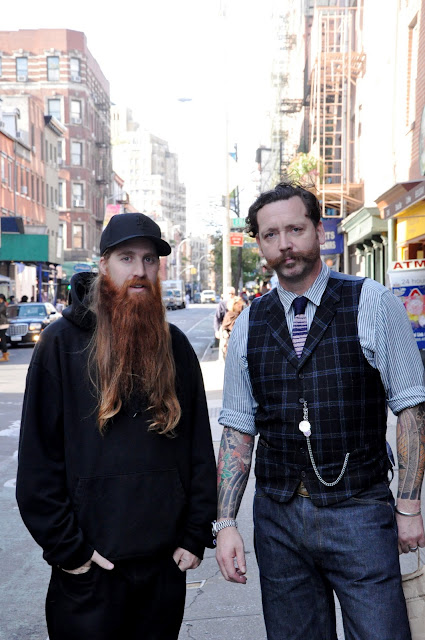 The Irish buddies:  not really from Ireland and not really part of our traveling group, but were kind enough to pose for an eager Floridian who doesn't see such sights in her neck of the ocean. 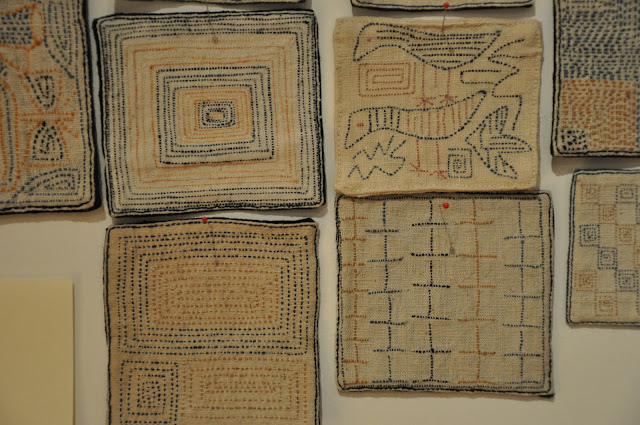 Habu:  my mom's absolute favorite part of the trip.  She could have snuggled down in the baskets of spun goodness on the floor.  It's a tiny tiny store on the 2nd(?) floor of a rather nondescript building: like a geode.  The most fantastic yarns and threads in these sweet little bundled morsels. 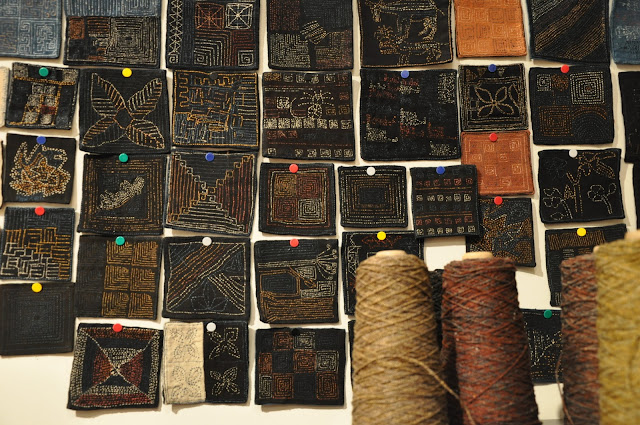 It was run by a bunch of Japanese girls who would go "behind the curtain" and giggle like school girls in a language only Ryan could understand.  They were knowledgeable and mysterious. 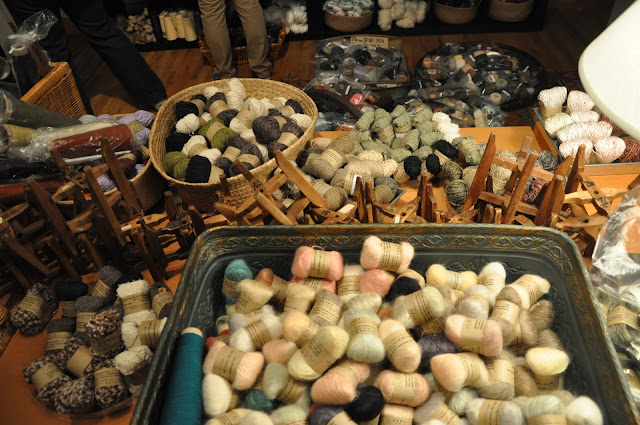 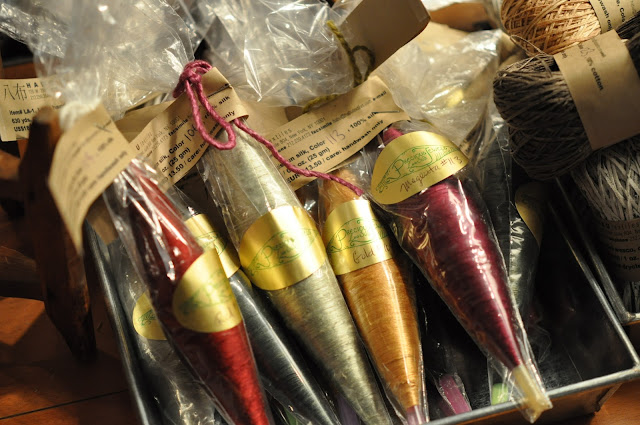 I bought some fabric with a handwritten tag that said: Southwest China.  Guizhou (Dong people/Shangdong liping area) 100% cotton dyed with indigo sized with buffalo skin glue, pigs blood, egg white/beaten.  I know.  What am I going to do with it?  I don't know. 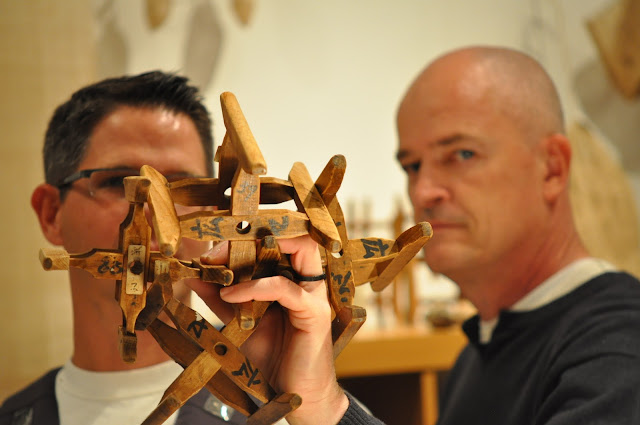 My dad bought 5 antique Asian yarn spindles to use as sphere stands. 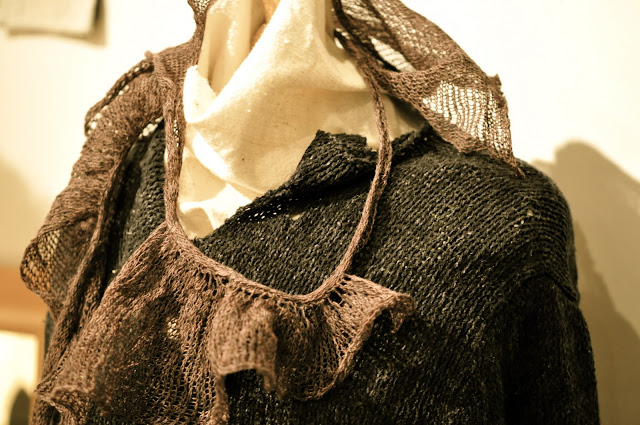 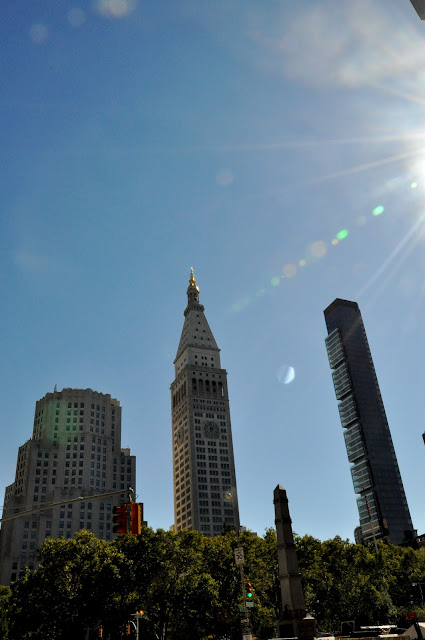 I've decided I could never drive in New York because I'm too sensitive [all that honking, the millisecond the light changes or if you happen to be waiting for a pedestrian to cross the street] and I'm not very good at driving backwards. 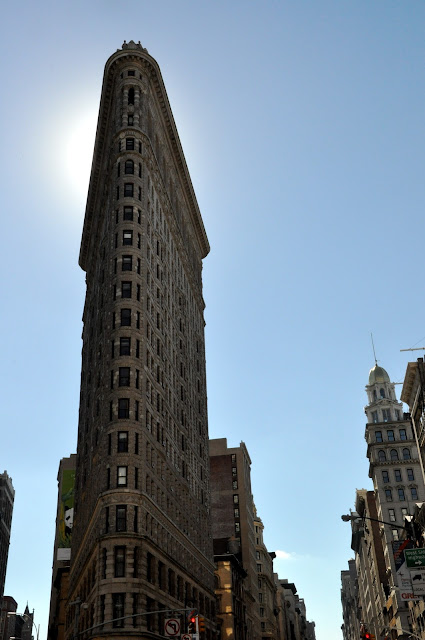 But perhaps I vicariously picked up some of their I'm-in-a-hurry-although-just-for-the-sake-of-driving-fast-ness, because I think I'm a bit more aggressive in my driving since being home.  Don't worry, not that aggressive. 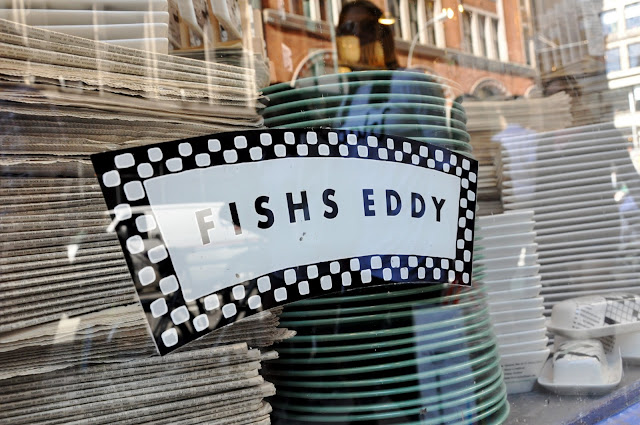 And then there was Fishs Eddy.  Ahh.  People talk about eye candy.  You don't know what eye candy is until you've been here. 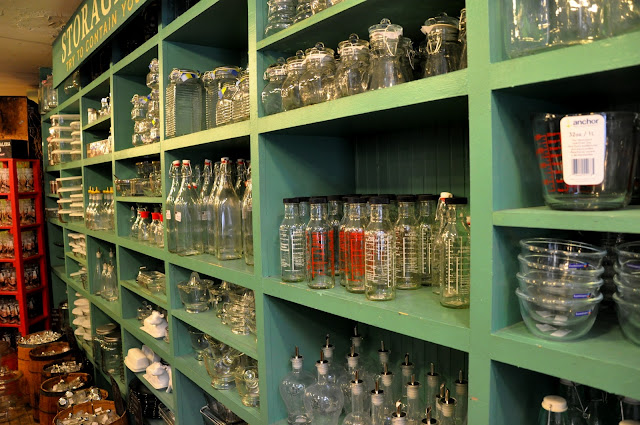 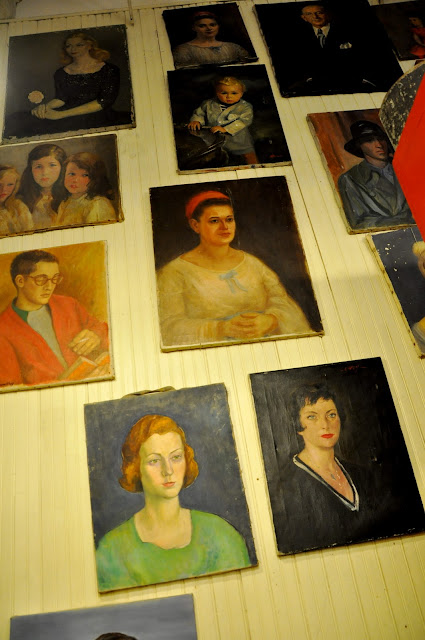 I'm not sure who these people are or who the artist is, but they get to enjoy Fishs Eddy non-stop. 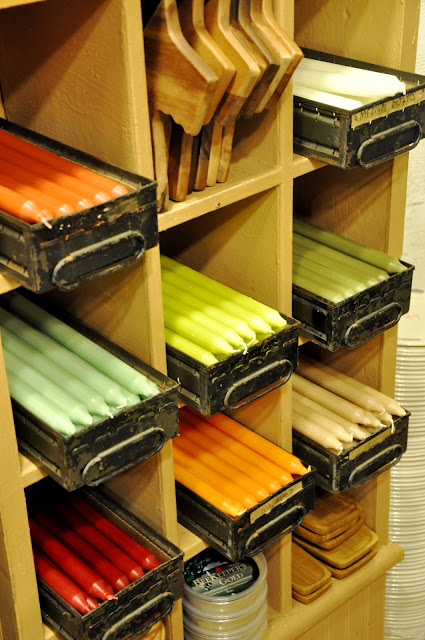 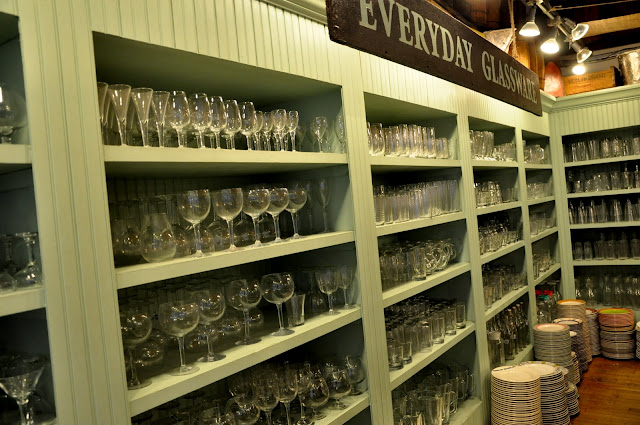 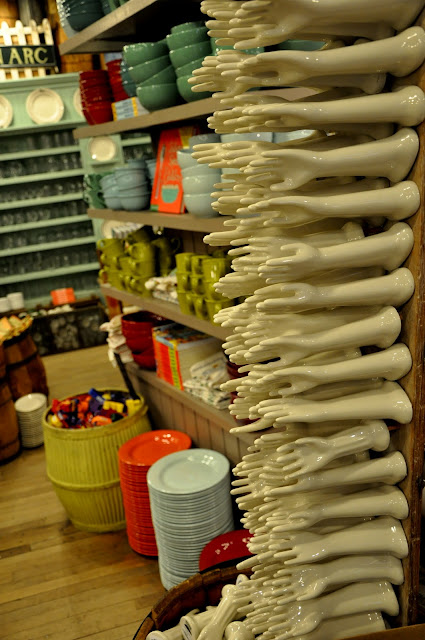 We bought some paper gray/white striped straws, and one of these tiny hands to add to our collection. 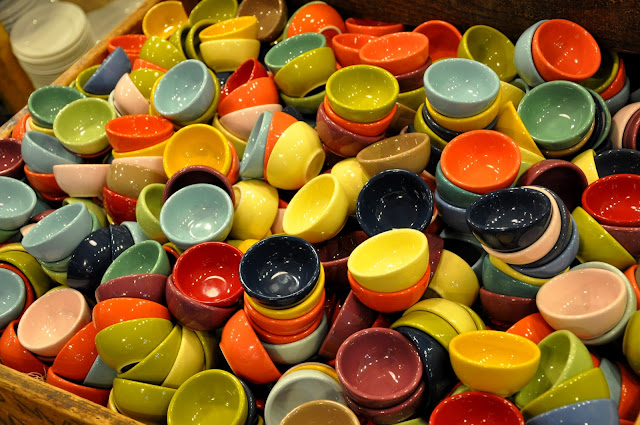 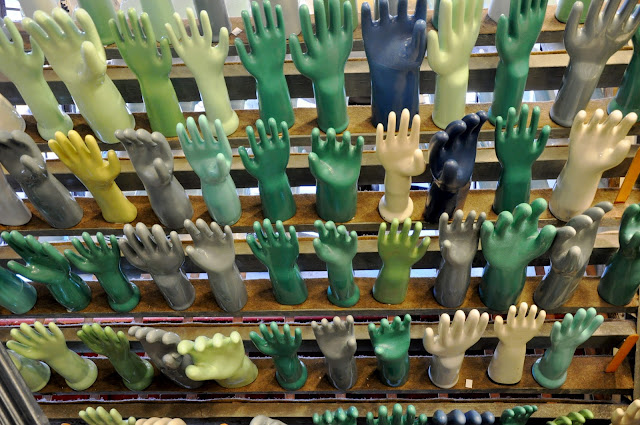 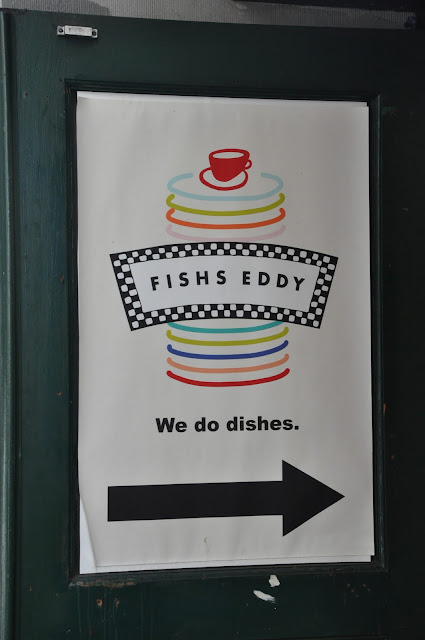 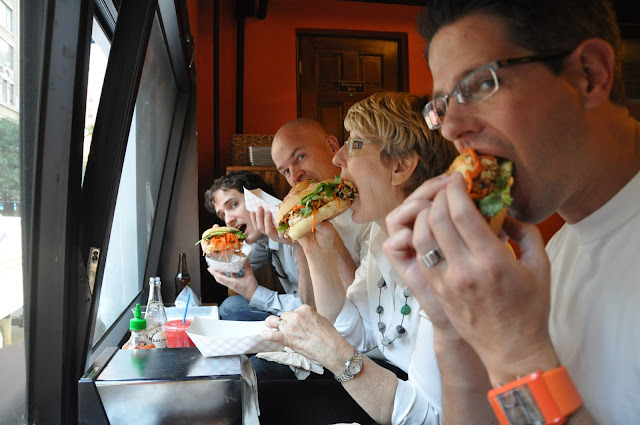 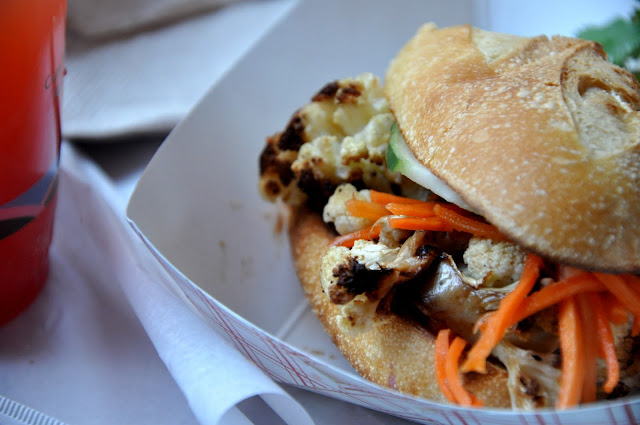 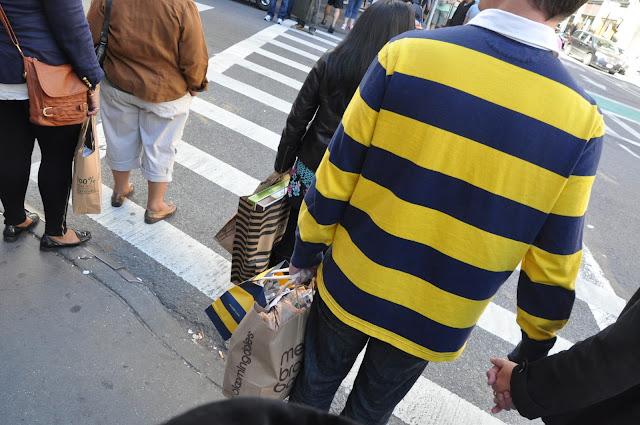 I found this guy entertaining.  I'm guessing he was so excited about his new blue and yellow stripe shirt he put it on immediately after his purchase, or else there was great coincidence with his matching bag. 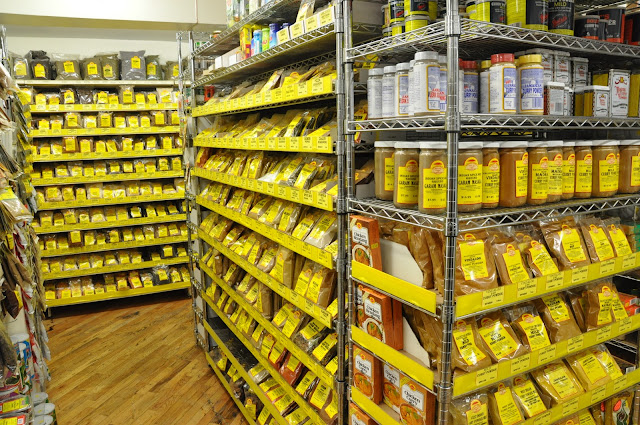 We bought some cardamom cookies here at Kalustyans.  Want a certain Indian Spice?  No doubt they'll have it.  They also had orange and lemon oil that we snatched up, as I can't seem to find a local source.  Bring on the Peach Rosemary Lemonade!! 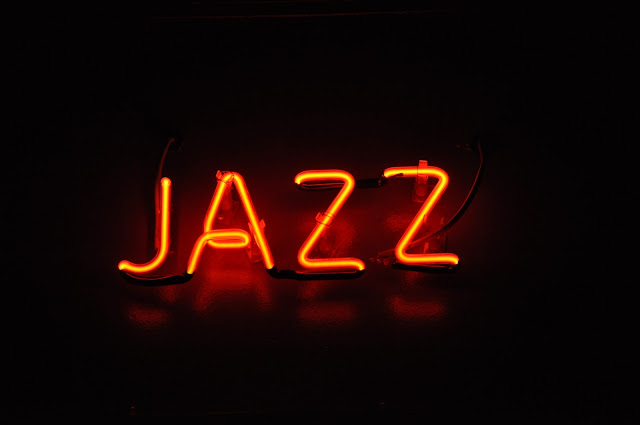 I went to my first Jazz production, courtesy of Jacob.  He's a Jazz whiz.  But this wasn't Kenny G type of Jazz [apparently aka soft Jazz.]  What we enjoyed while eating a dessert sampler and herbal tea was "Straight Ahead" Jazz, a la Robert Glasper Trio.  Thanks for the Jazzucation, Jake.  Unfortunately photos were not allowed, so you get the neon jazz sign outside the joint.

Guess what.  I have more.  Do you need a break?
Created by Big Black Car Beatz

Email ThisBlogThis!Share to TwitterShare to FacebookShare to Pinterest
Randomly Filed under NYC