Planes, Trains, and Automobiles (can you find all three?)

I got a text from my sister up in Virginia a few weeks ago asking if I wanted to come visit when my mom was going to be there. Here's the thing about Ryan and me.  We have a hard time committing to things, but when we do, boy howdy, we commit. 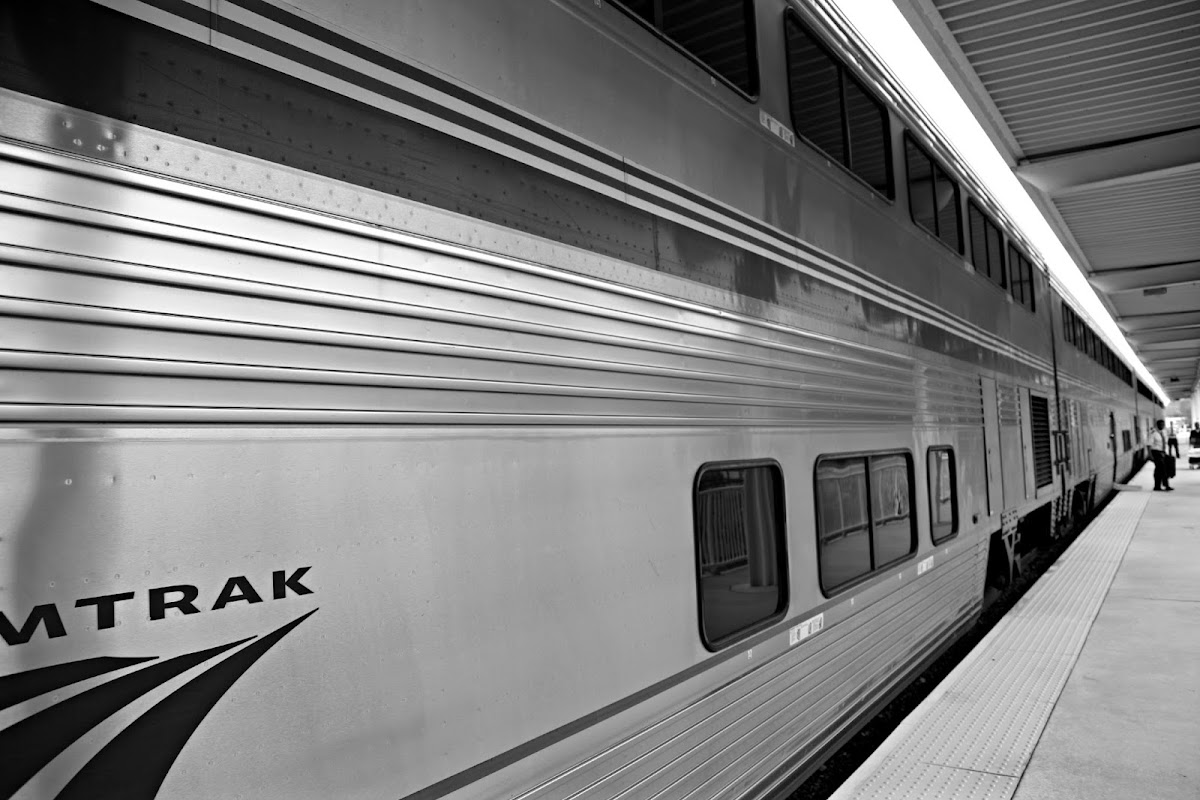 Ryan booked us on the autotrain.  They load up our car and we hop on the train, hoping that the food will be okay and that at least a few of us will get some sleep.  Ryan loved the food and slept well, so I guess we hit our goal? ;) 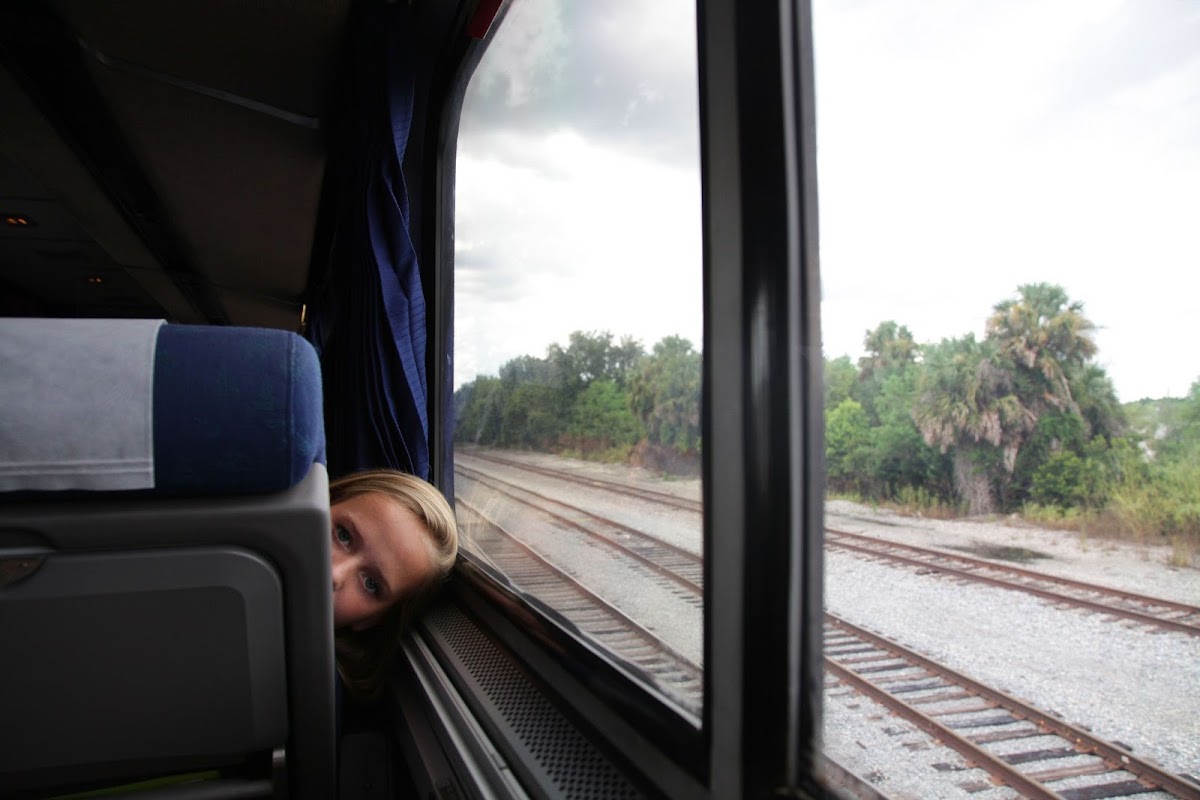 It was romantic, though.  Watching the scenery move past, while we were comfy-cozy in our generously sized train seats. 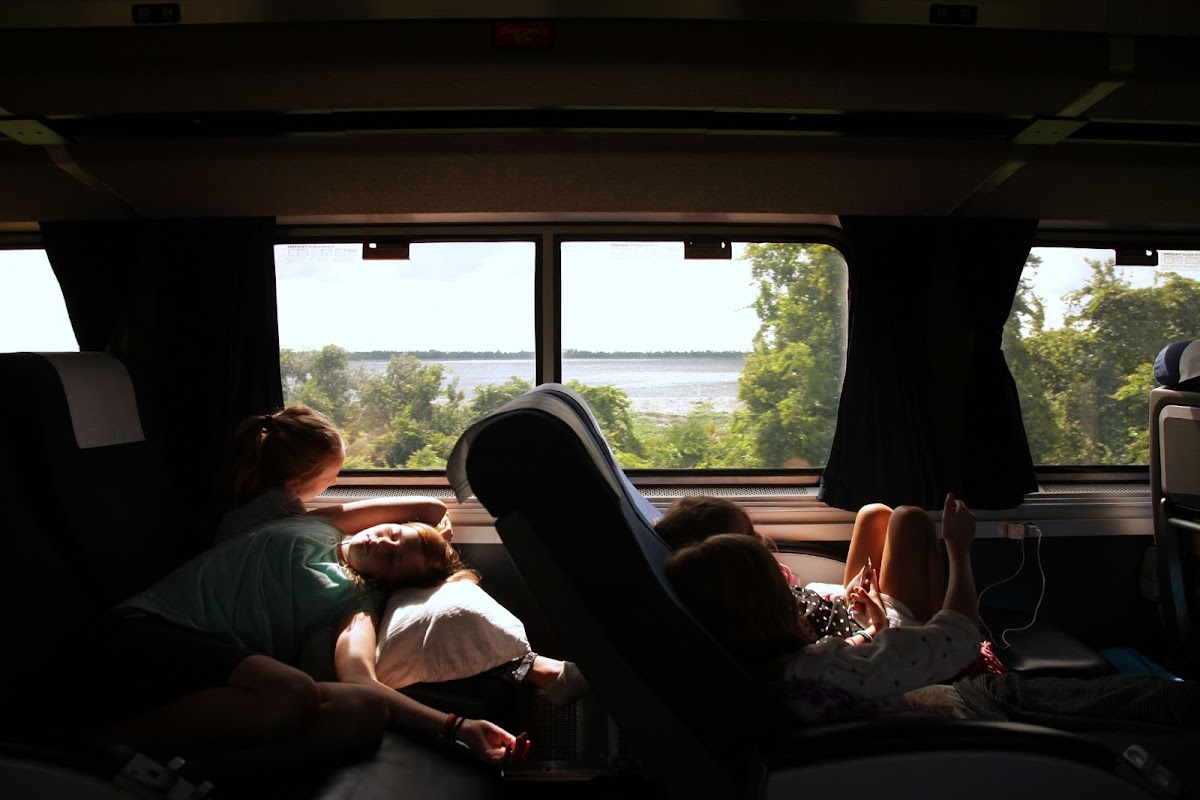 The kids thought it was a blast. 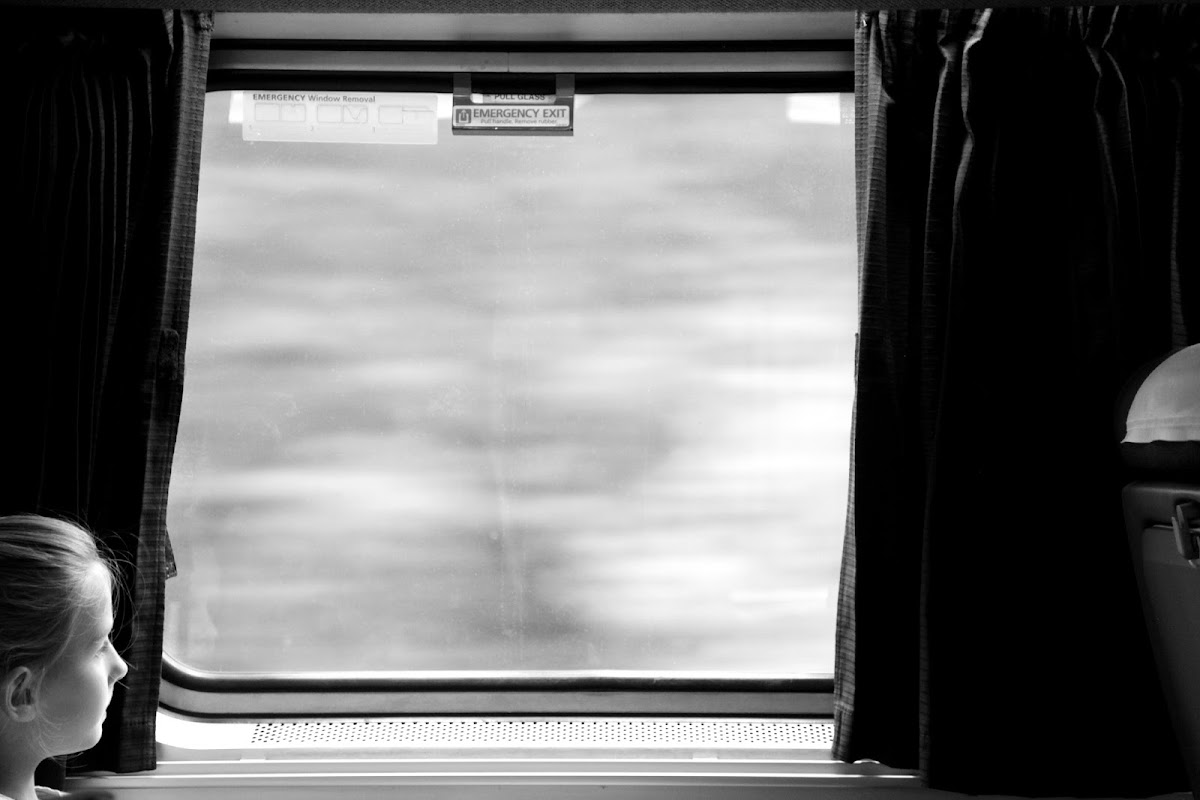 In fact, Divine was considering a train career, until she still felt the swaying and moving long after we had disembarked. Does one disembark a train? 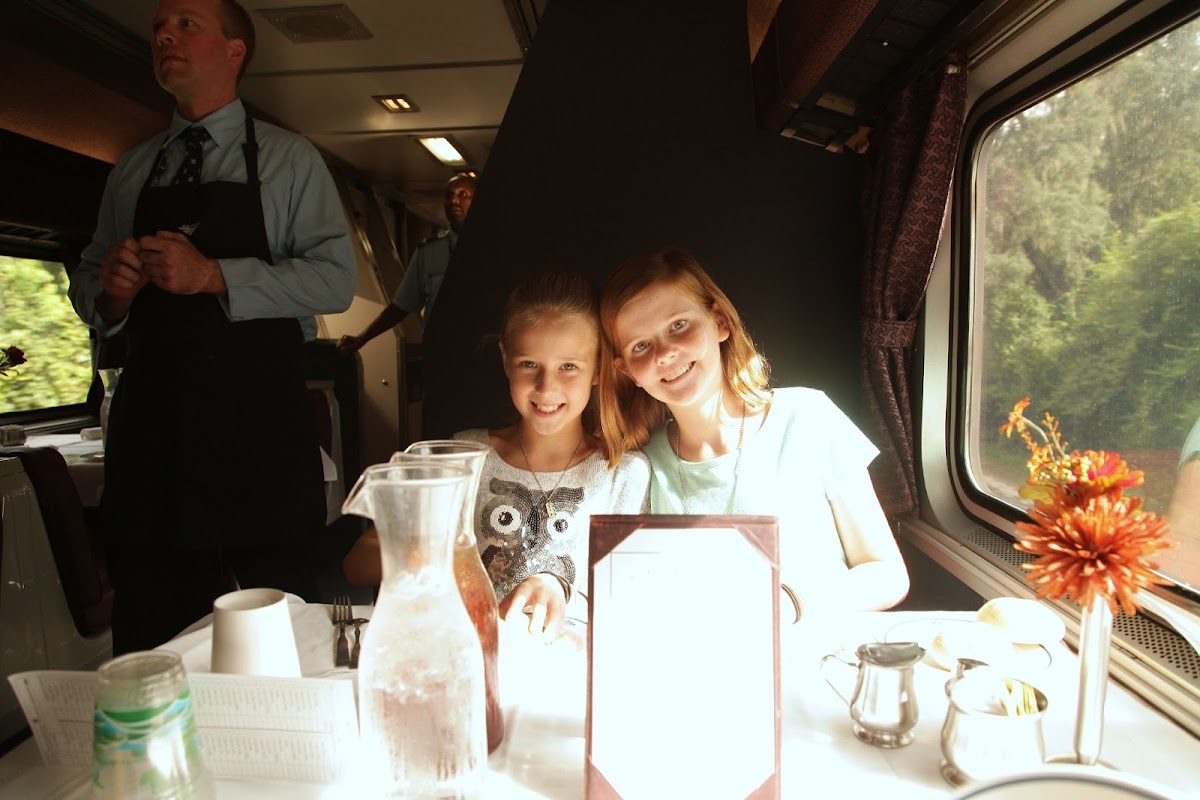 I told Ryan I would do it again if he got a cabin for me to sleep in and the rest of them could sleep coach.  We'll see ;) 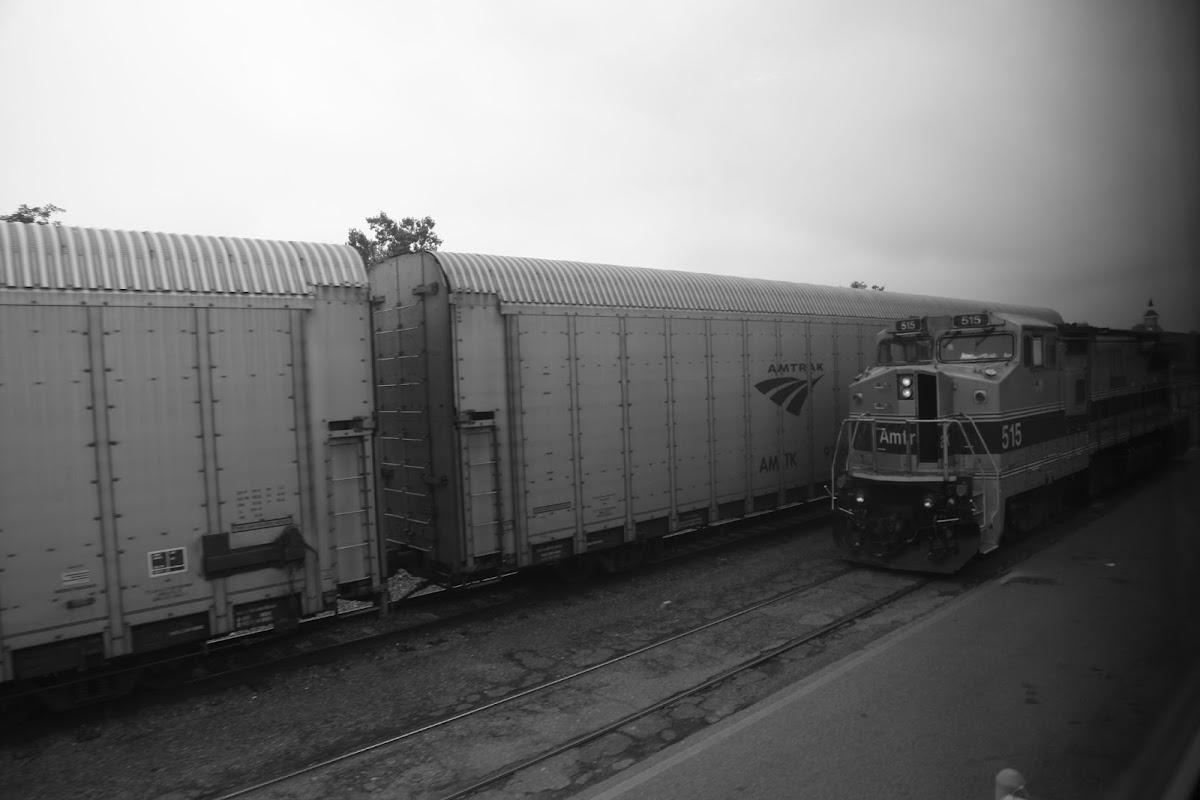 We spent our first day in DC, not realizing what a nightmare parking is.  After a bit of tension, we finally found a spot and got out to go see this District of Construction, er I mean Columbia. 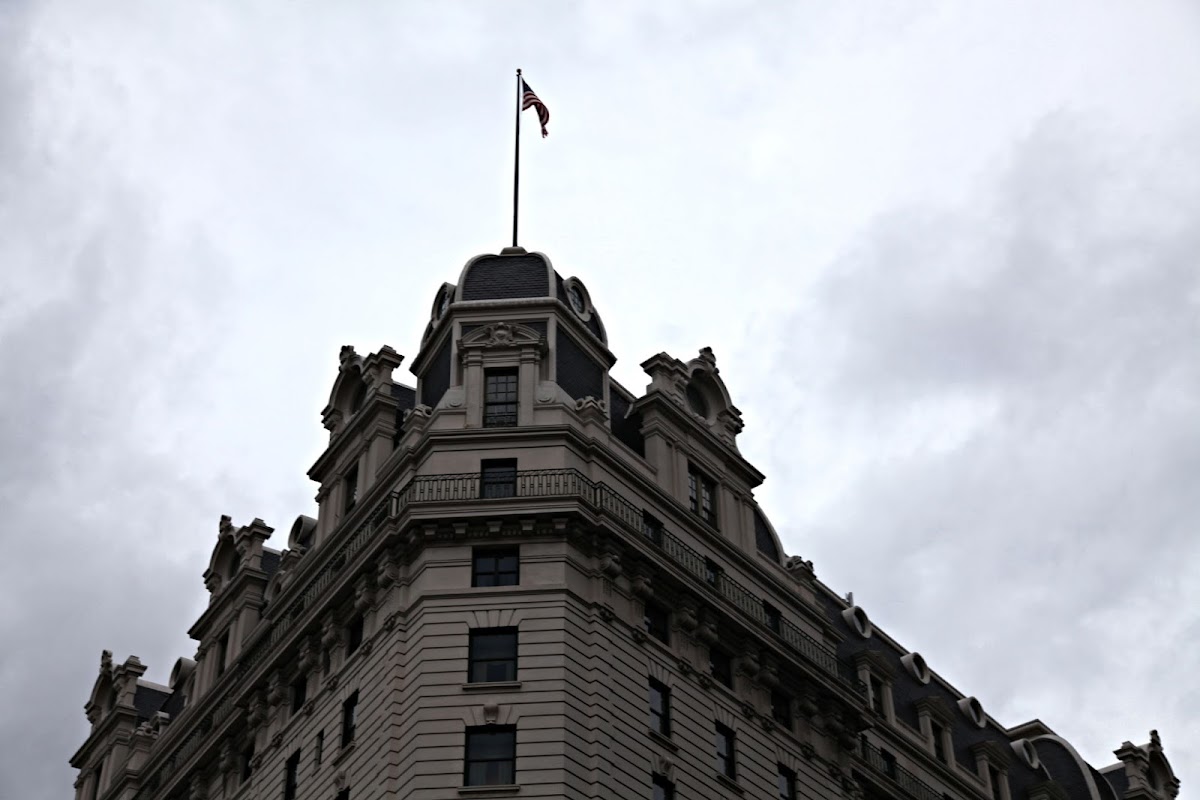 We hit the Spy Museum first.  This one is NOT for little ones.  The older kids enjoyed it, but Drummer couldn't get out of there fast enough.  Next we went to Zaytinyas for lunch.  Not only was the food phenomenal, but we happened to run into my sister and her husband who were taking a romantic getaway while my mom watched their kids.  What?!  There was surprise and delight all around. 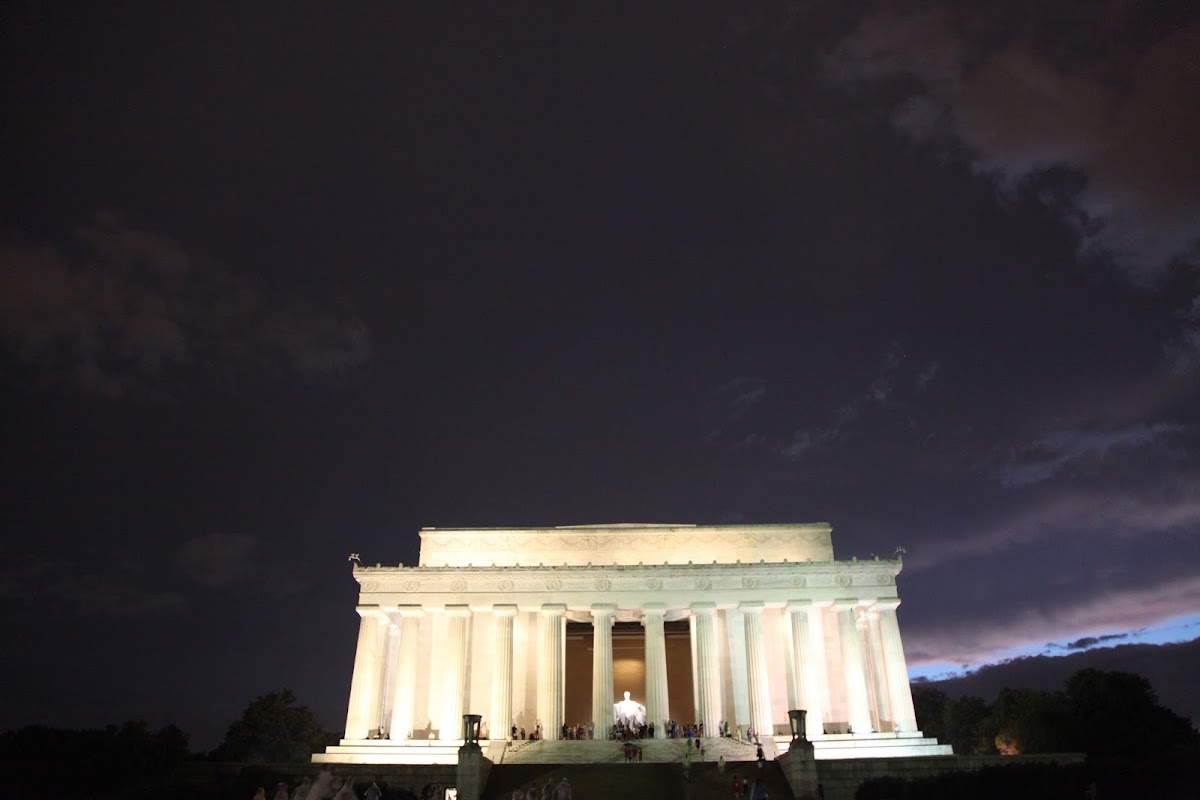 We went to the Hirshhorn museum with them and then allowed them to continue their romantic weekend without the 8 of us.  I'm sure they were deeply disappointed. ;) 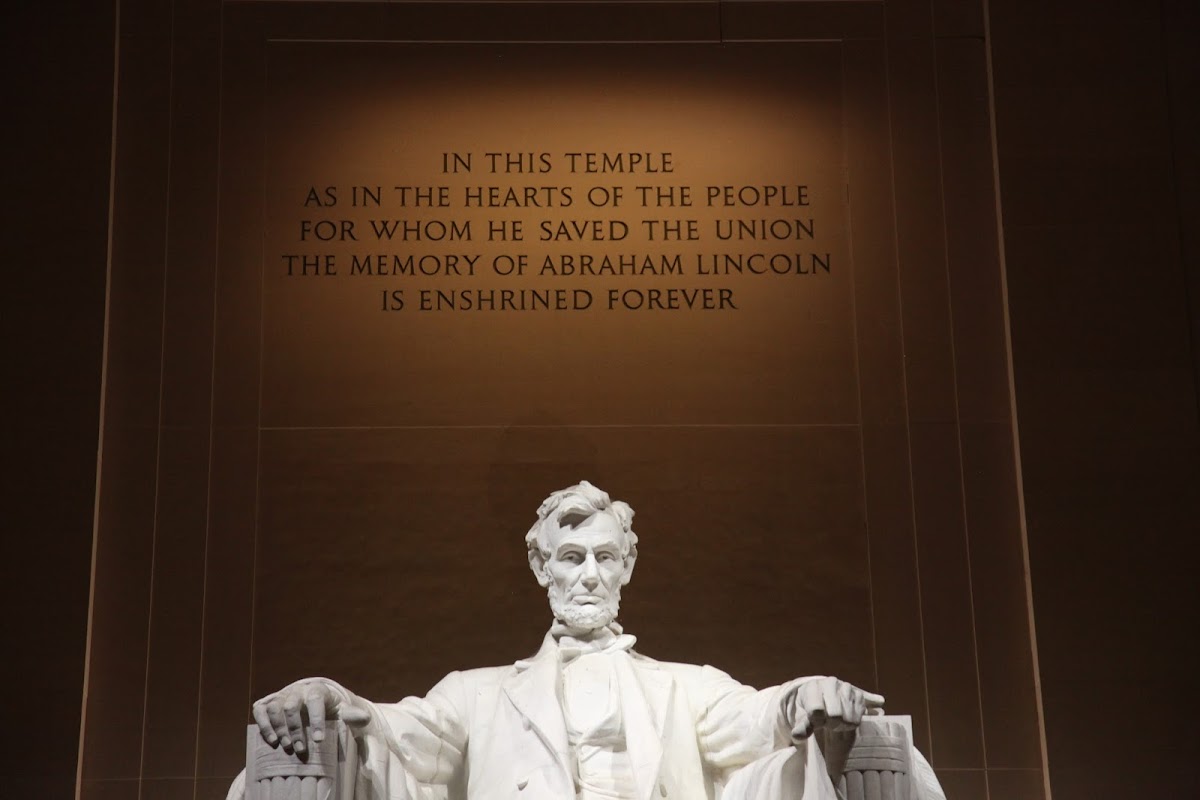 We also visited the Portrait Gallery and grabbed a bite to eat at The Shake Shack before we made our way to the Wilson Hotel to catch an evening bus tour on a double decker bus. 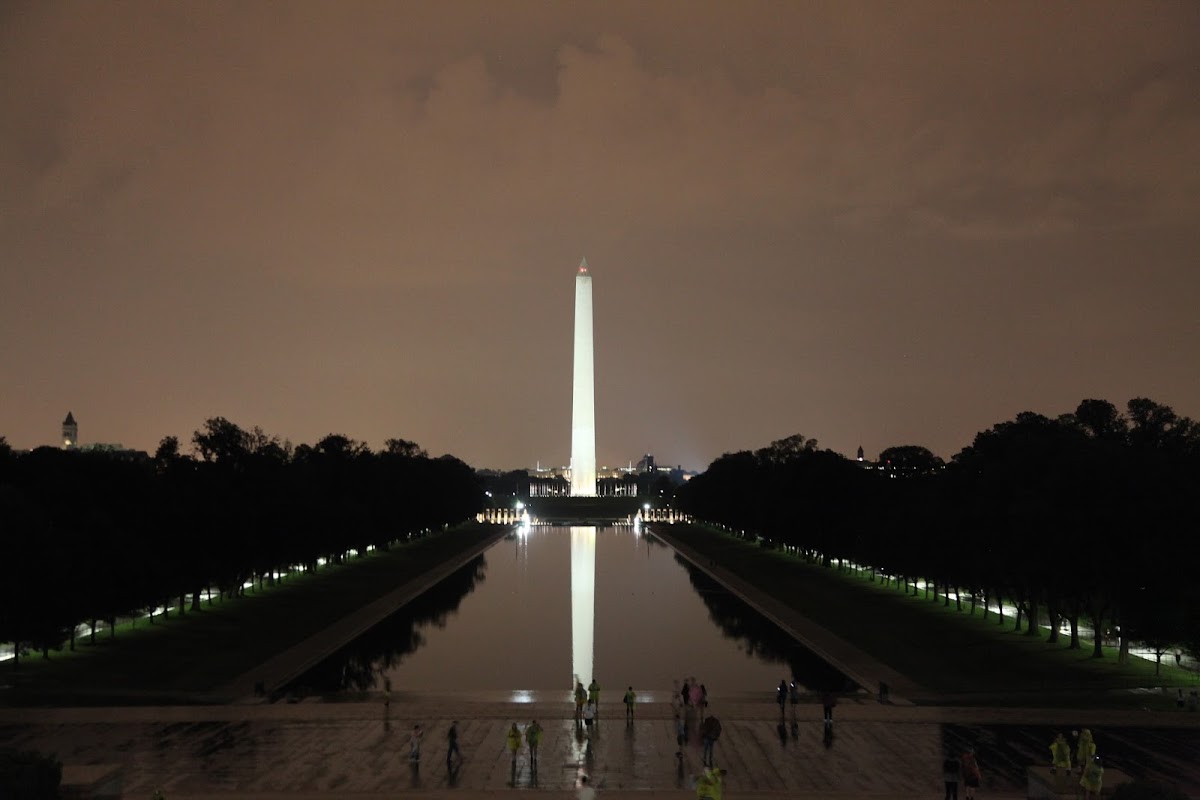 It rained on and off all evening, which turned out to be great, because the crowds were very sparse.  We got off the bus at each stop to walk around and learn bits of the history of our great nation. 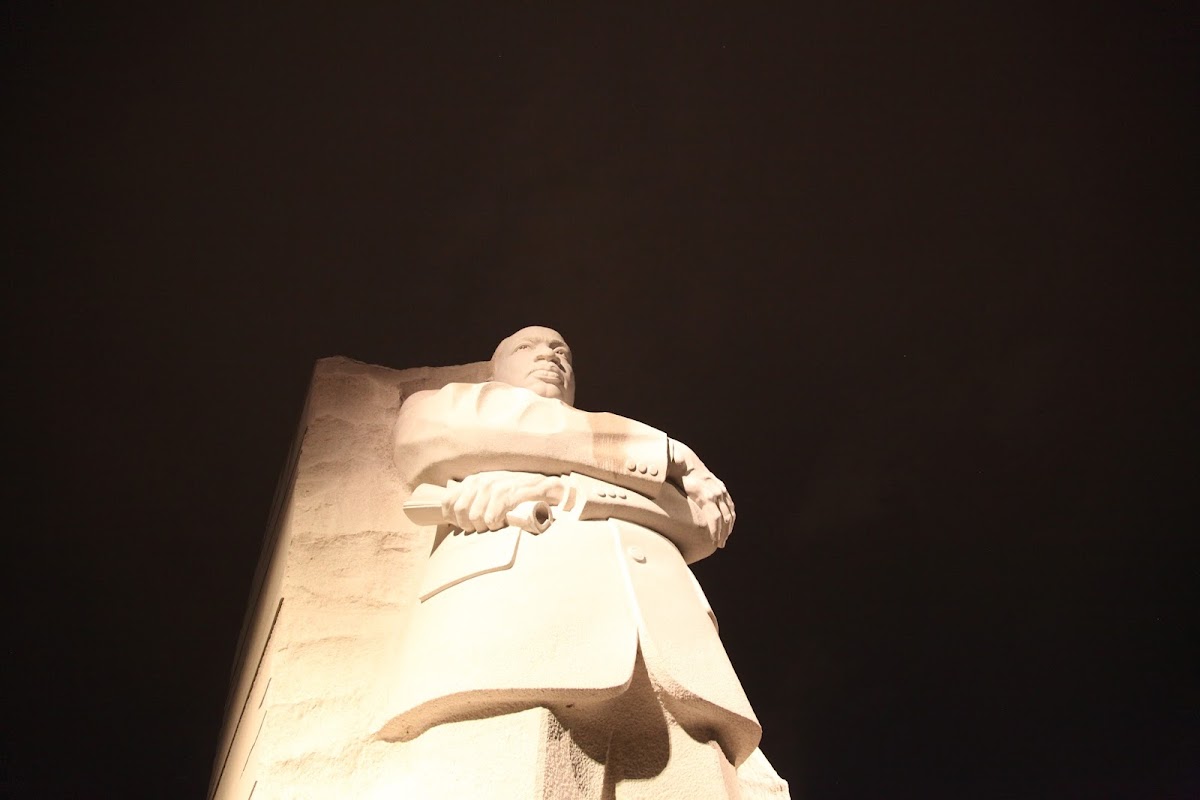 I was especially impressed with the Martin Luther King, Jr memorial.  We were the only group there.  Our guide told us the story of the "I Have a Dream Speech".  Martin had written a draft of the speech he was planning to give at the Lincoln memorial at the Wilson hotel.  He started into his speech when the African American gospel singer Mahalia Jackson shouted to King from the crowd, "Tell them about the dream, Martin." 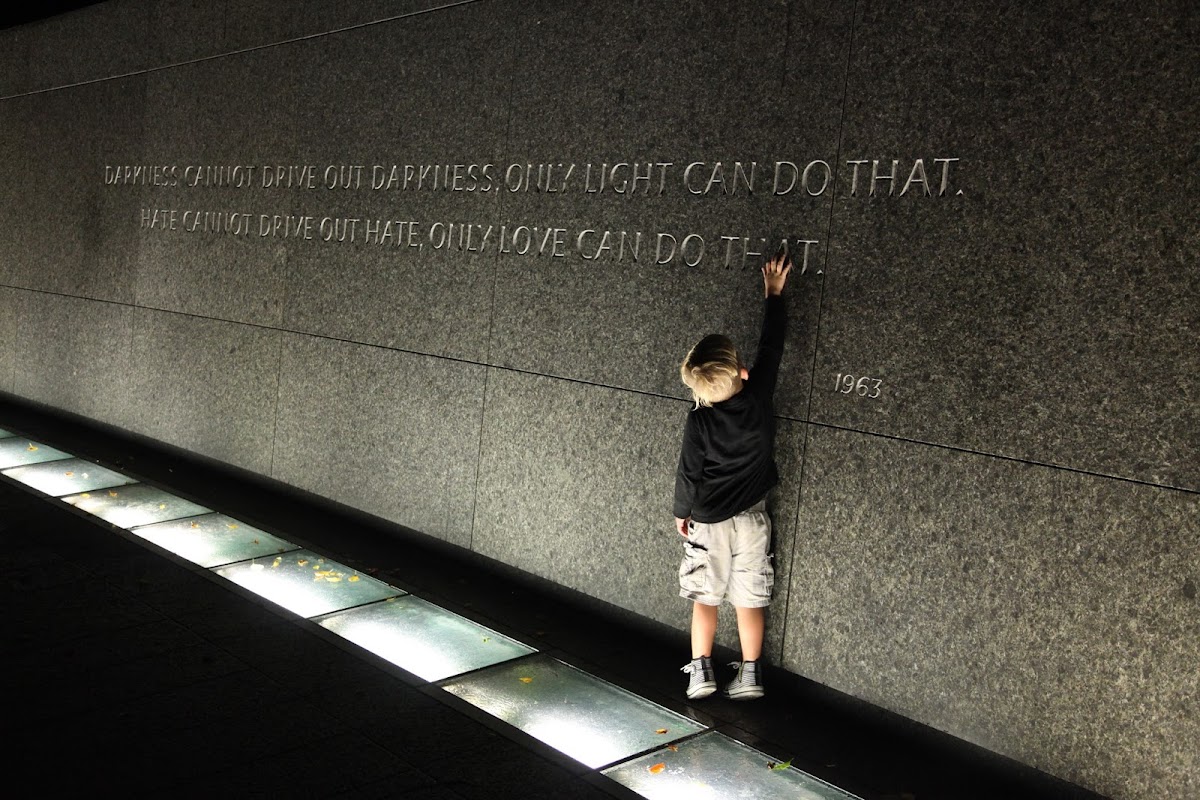 That's when he began the famous "I Have a Dream" portion, and that's why he's depicted with his speech rolled up and in his hand, because he's just talking from his heart.  Along the wall behind his statue are quotes from his other speeches.  Olive memorized three of them on the spot. Being there in the dark was a spiritual experience.  I'm hoping my kids will remember this one. 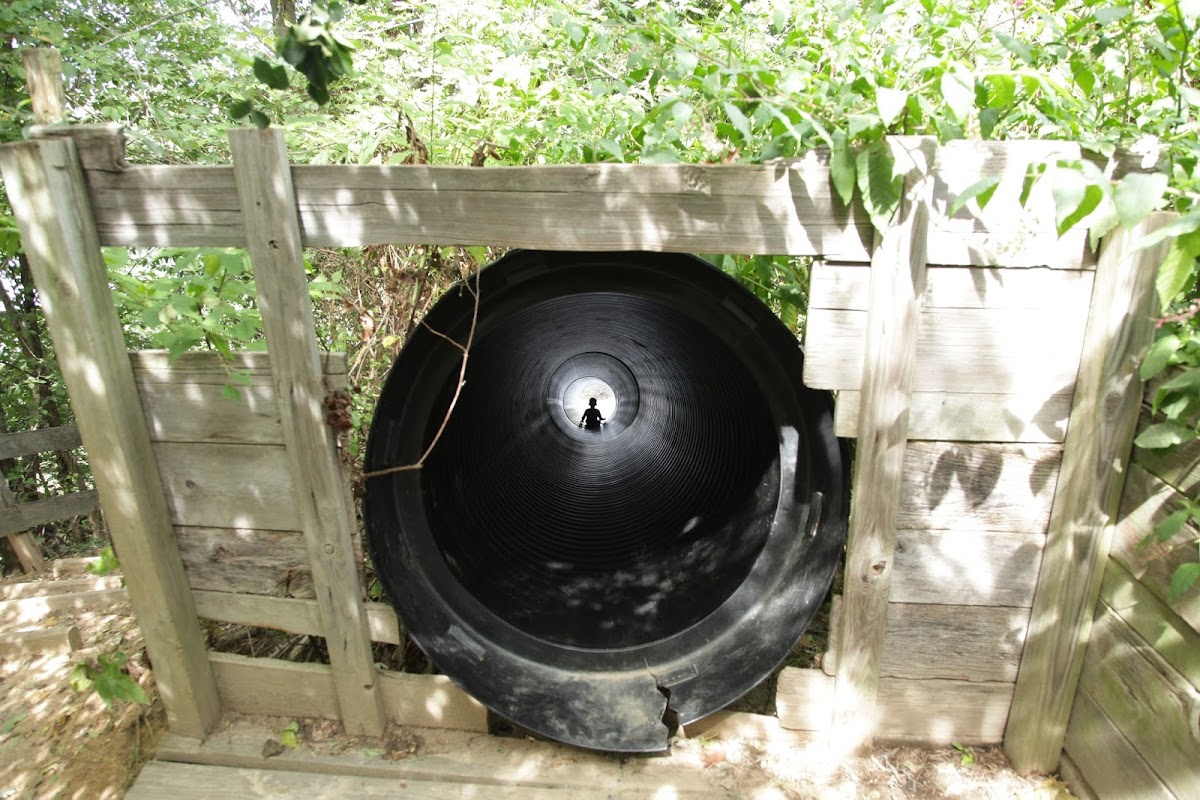 Then we made our way over to Virginia where my sister lives.  We were immediately smitten. 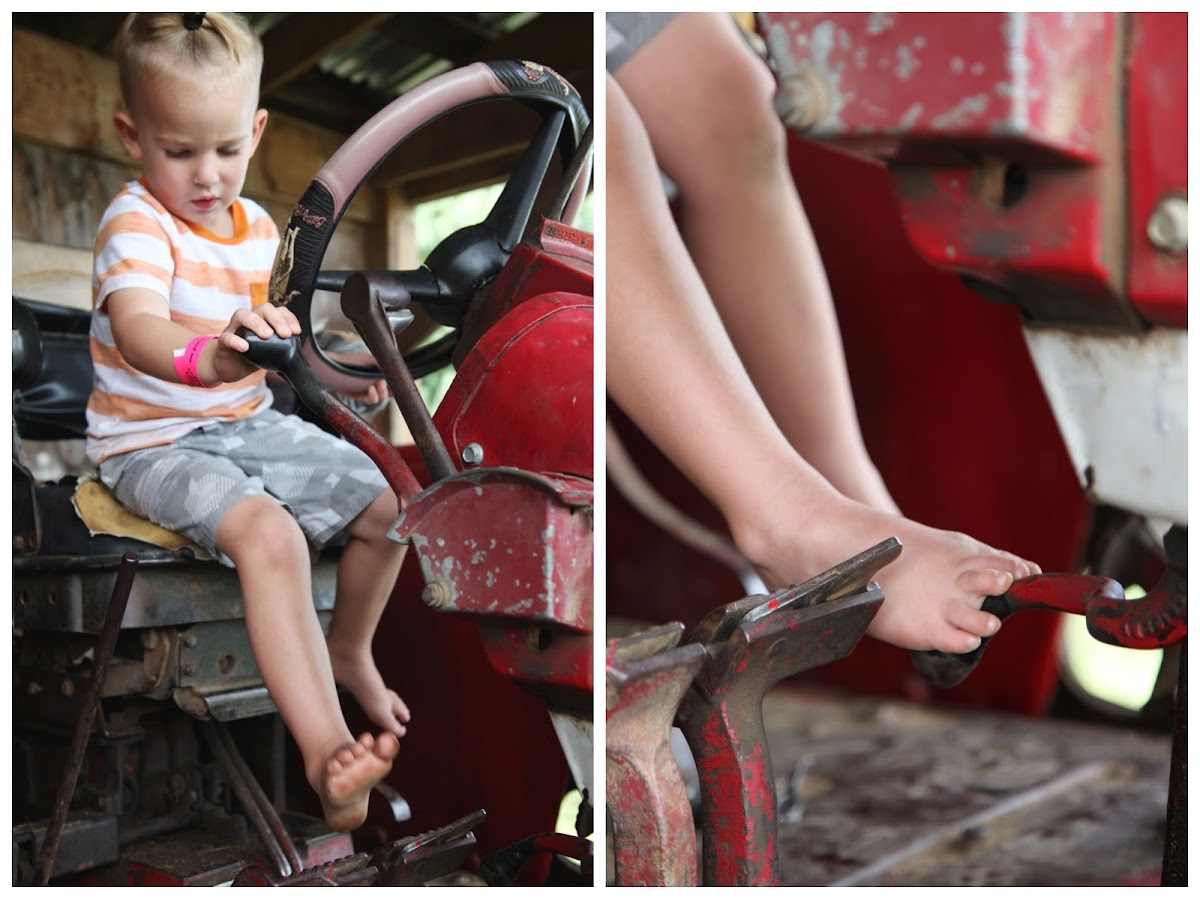 Virginia really is for lovers.  With the rolling hills and, especially where she lives out in the countryside, it's a slower way of life which is highly underrated. 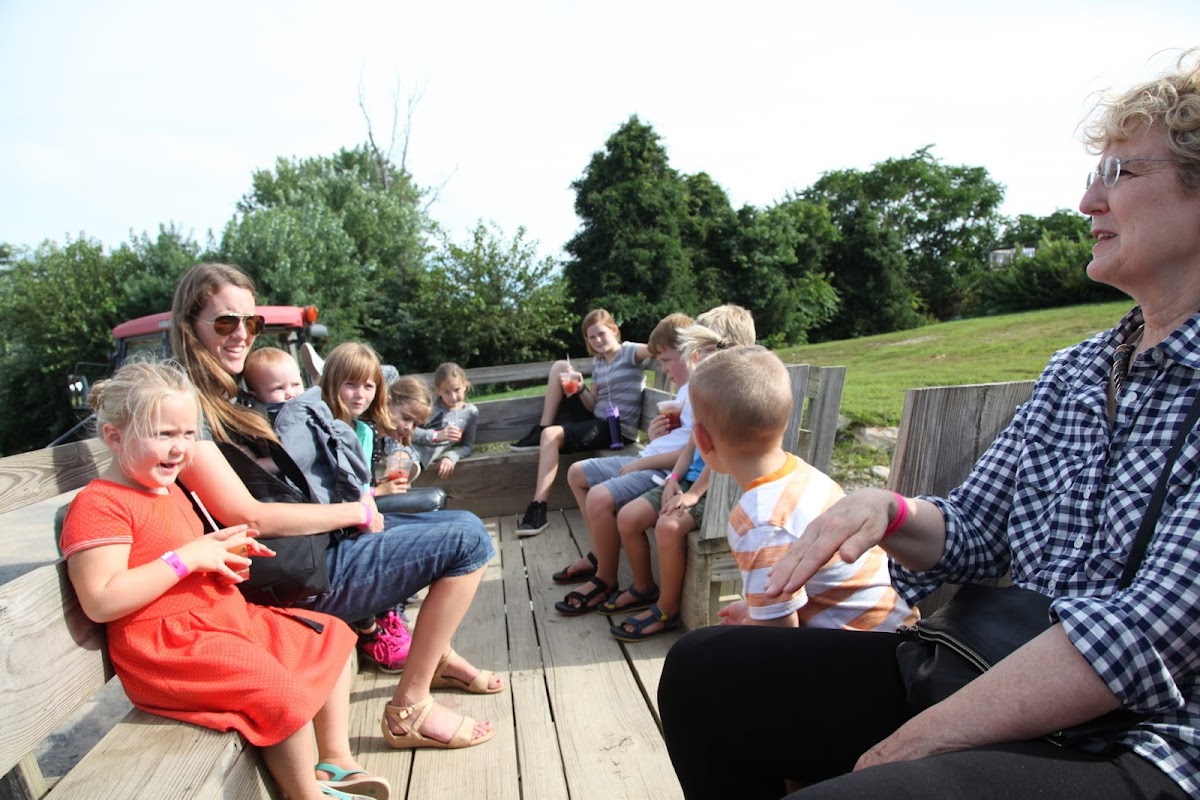 We went peach picking at a farm that was just 2 minutes from Ann's house.  We brought home 60 pounds of fresh Virginia peaches! 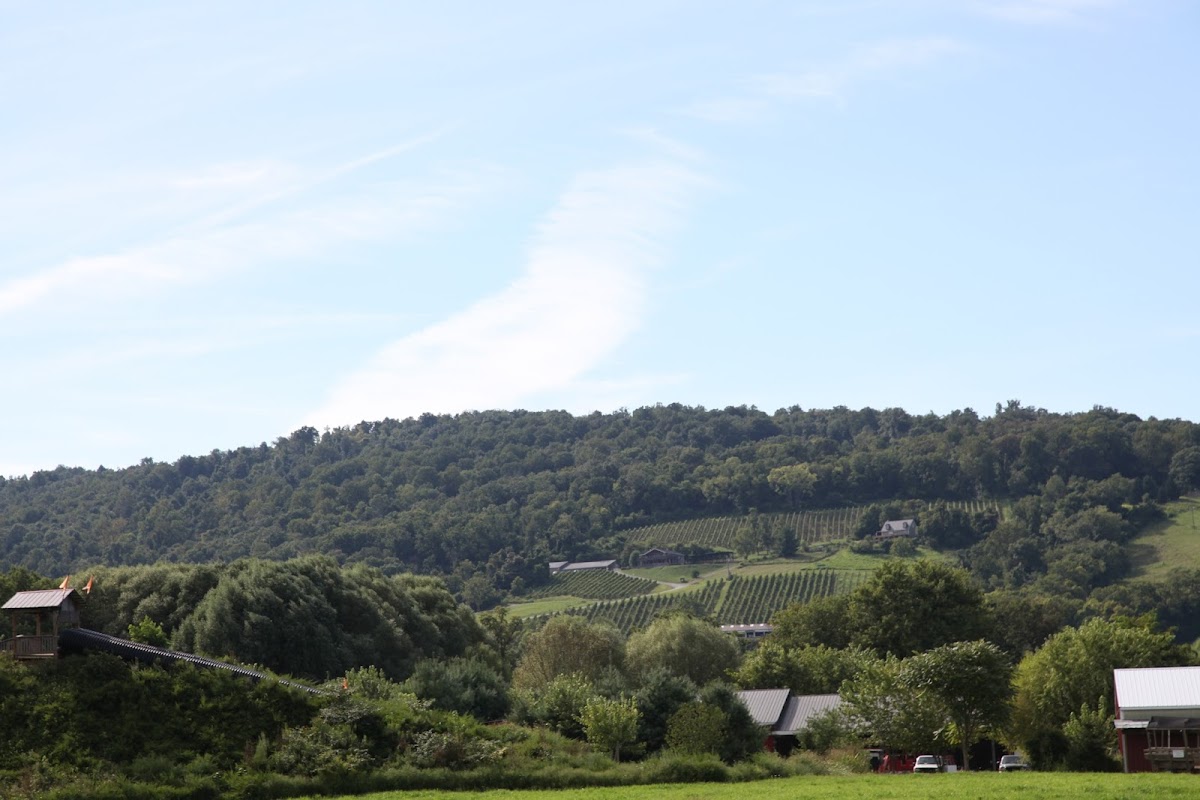 Pearl had my camera for about half this trip and is was fun to see what she thought noteworthy.  Apparently me, making peach face at her. ;) 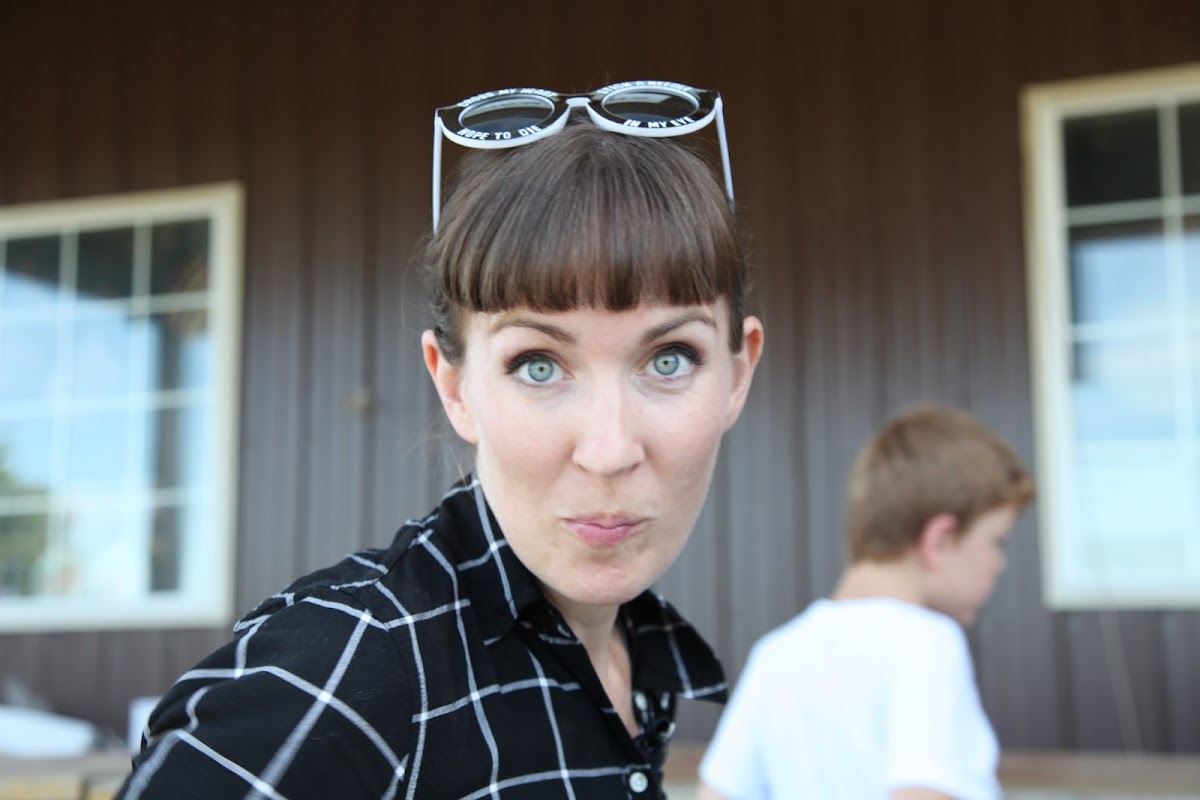 Little Hyrum (far right) took to Divine like a second mommy.  It was so cute to see him grab her hand and drag her around like a well-loved teddy bear. 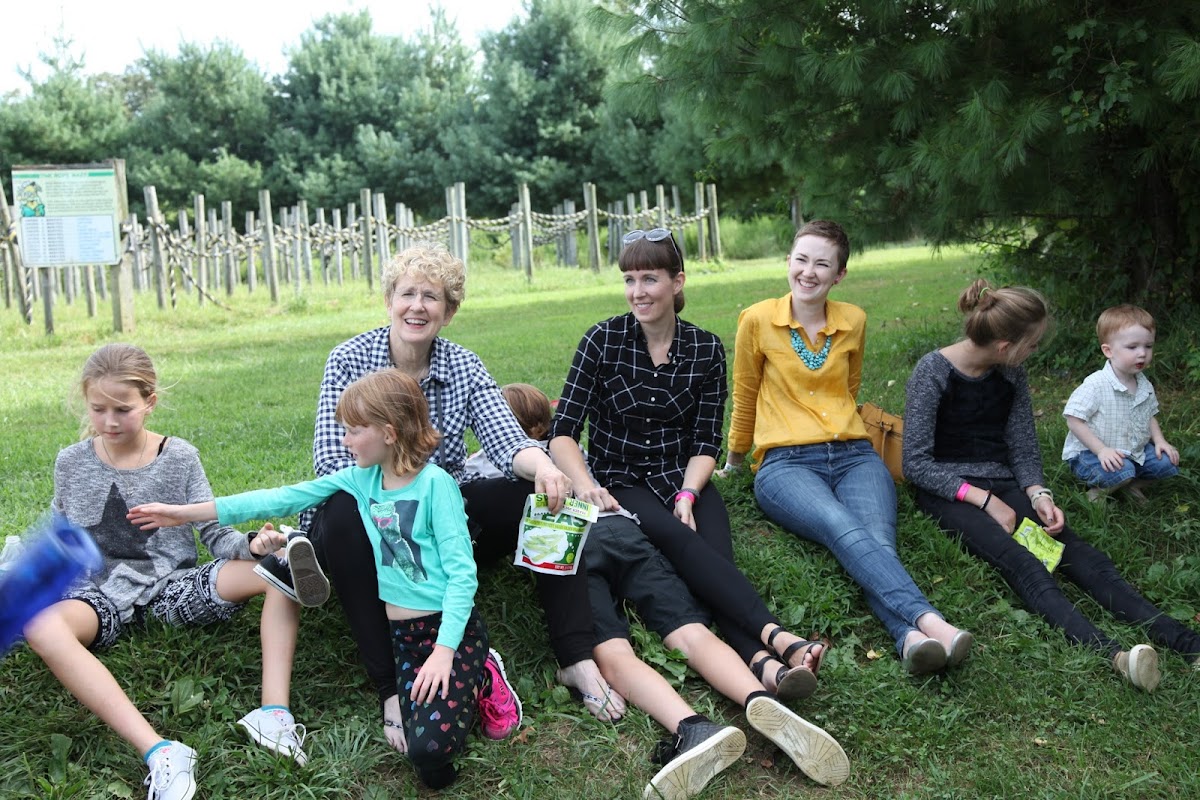 We made sure to hit a cute little fabric/yarn shop, Finch's Sewing Studio.  We had some spare moments, waiting for a table to seat all 14 of us, and Ann took us down the street.  I was skeptical they'd be open because all the other shops were closed, but it just so happened to be one of the two nights they stay open late for a chat, snack, and sewing session!  I loved this shot of Divine admiring her grandma admiring a gigantic skein of yarn.  We aren't a touchy-feely family except when it comes to textiles, ha ha! 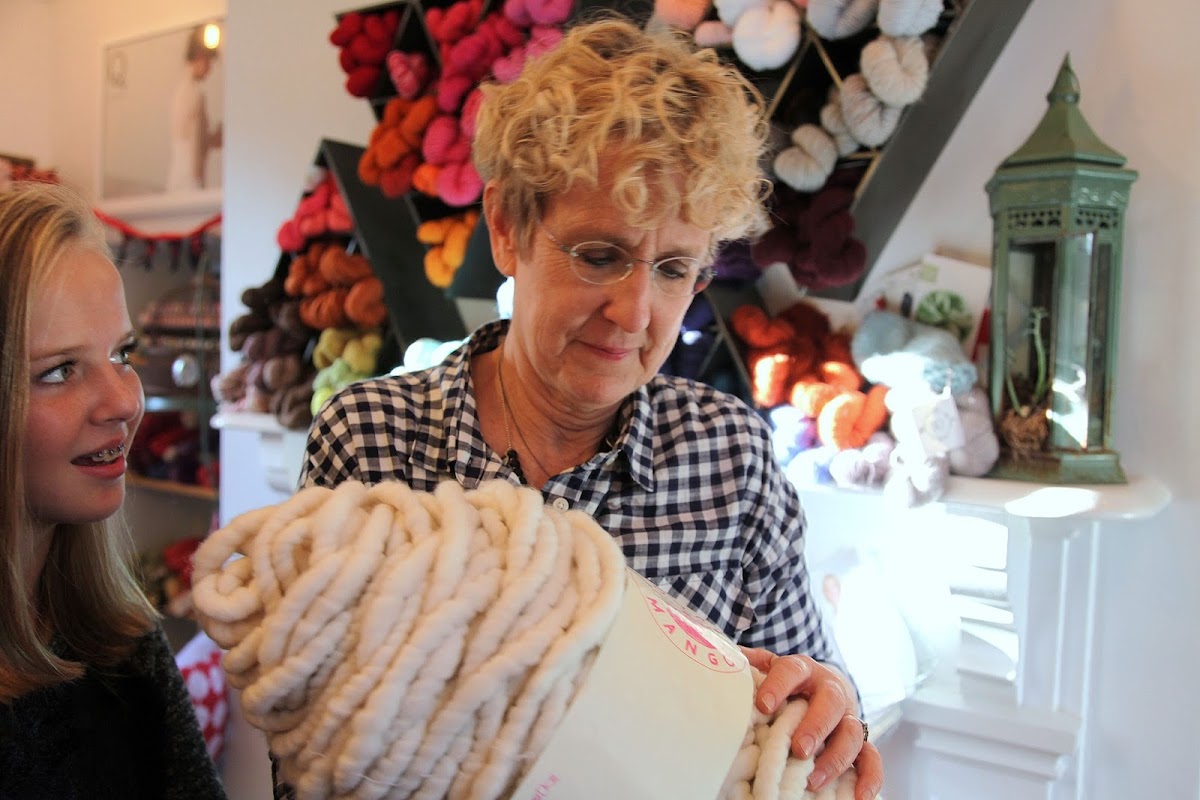 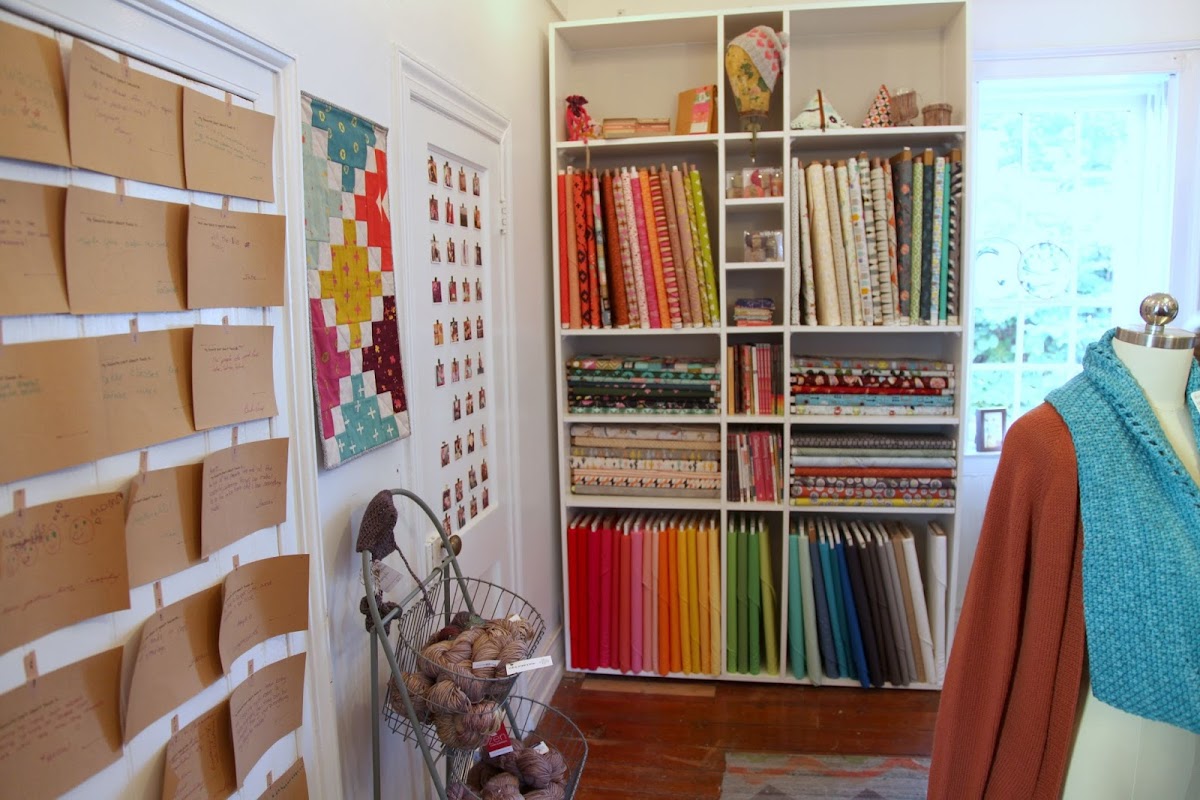 I couldn't resist that cotton, red lace in the lower right corner... 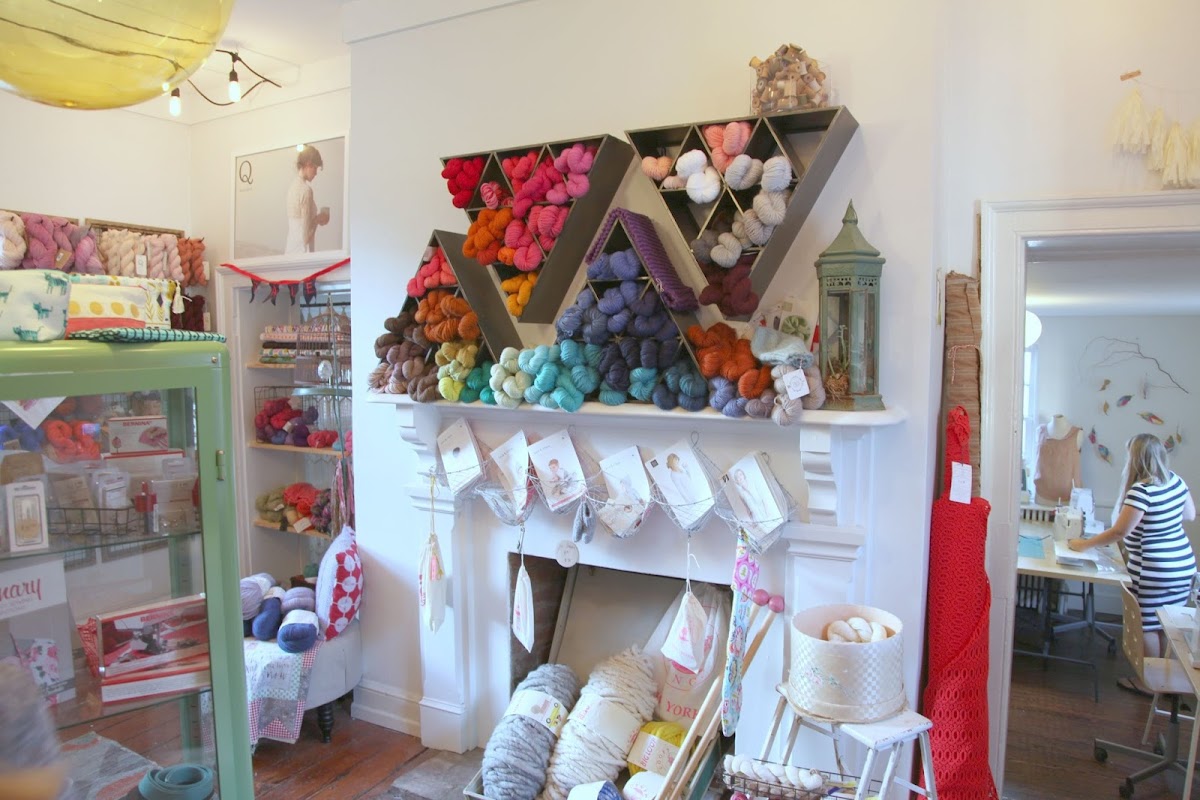 It's built in an old house with treasures to find in every room. 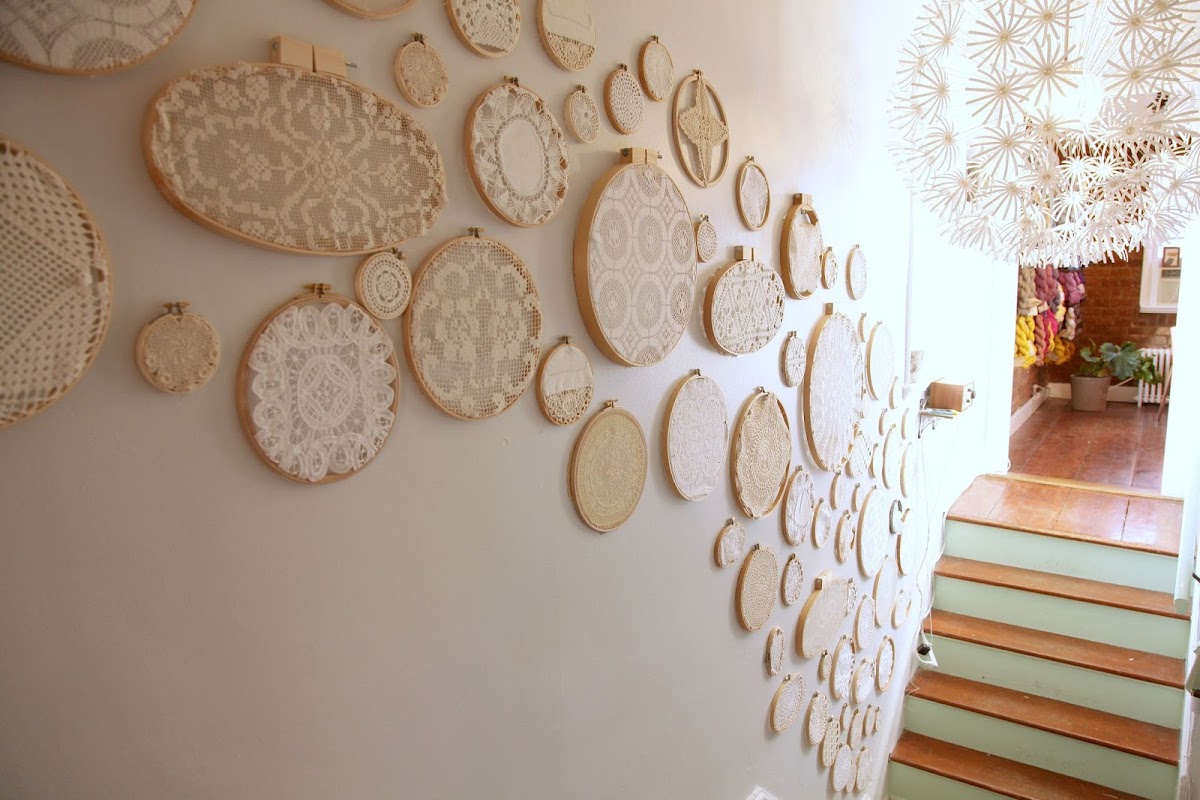 Three generations of makers, plus a ghost-like little dancer. 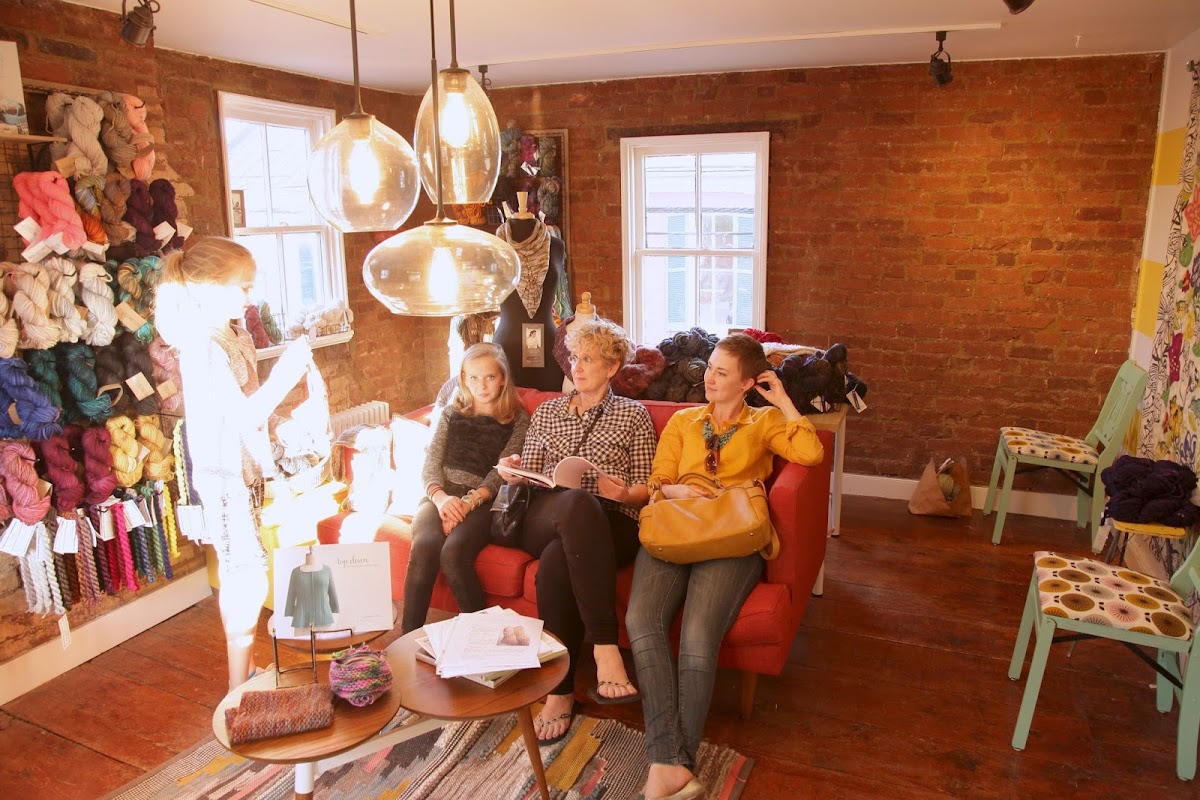 This is what the boys were doing while the women-folk were...women-folking. 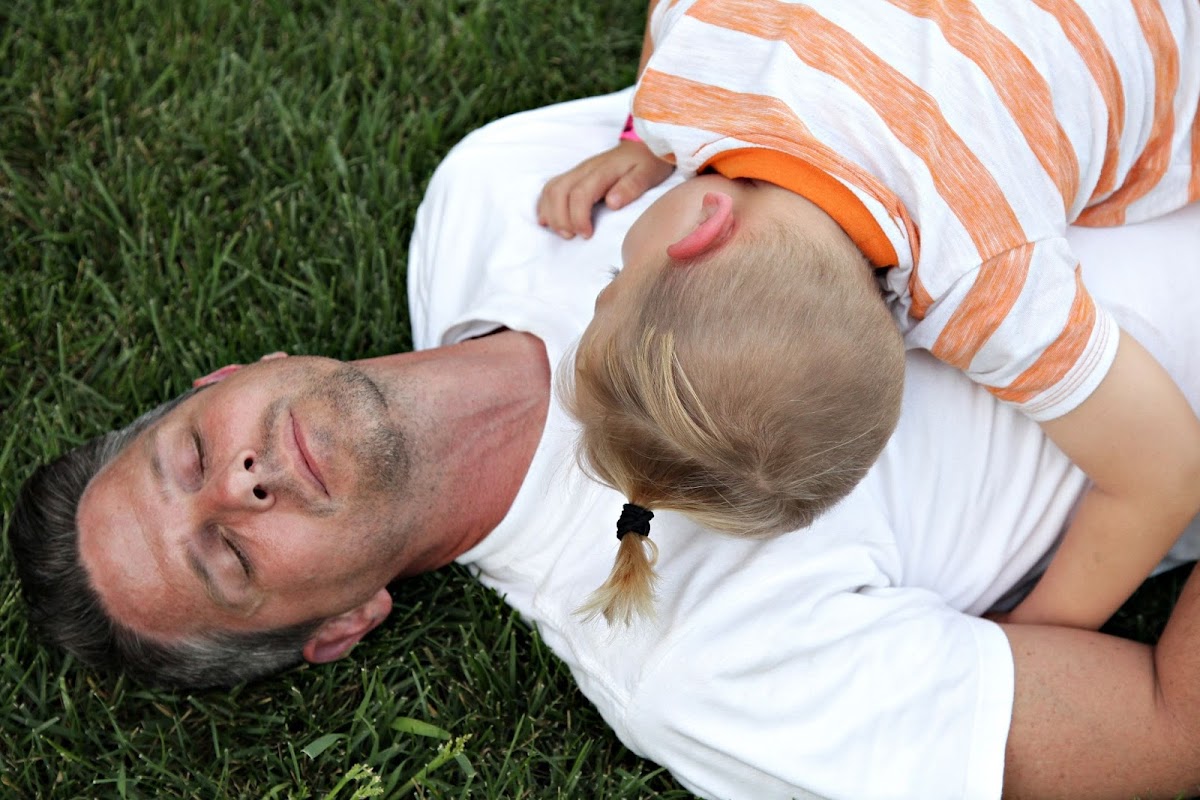 Don't worry, though, because our last day included a whole lot of manly planes.  That was such an amazing experience.  Again, it made my heart turn toward those who have gone before in this great nation, risking lives to make it a better world. 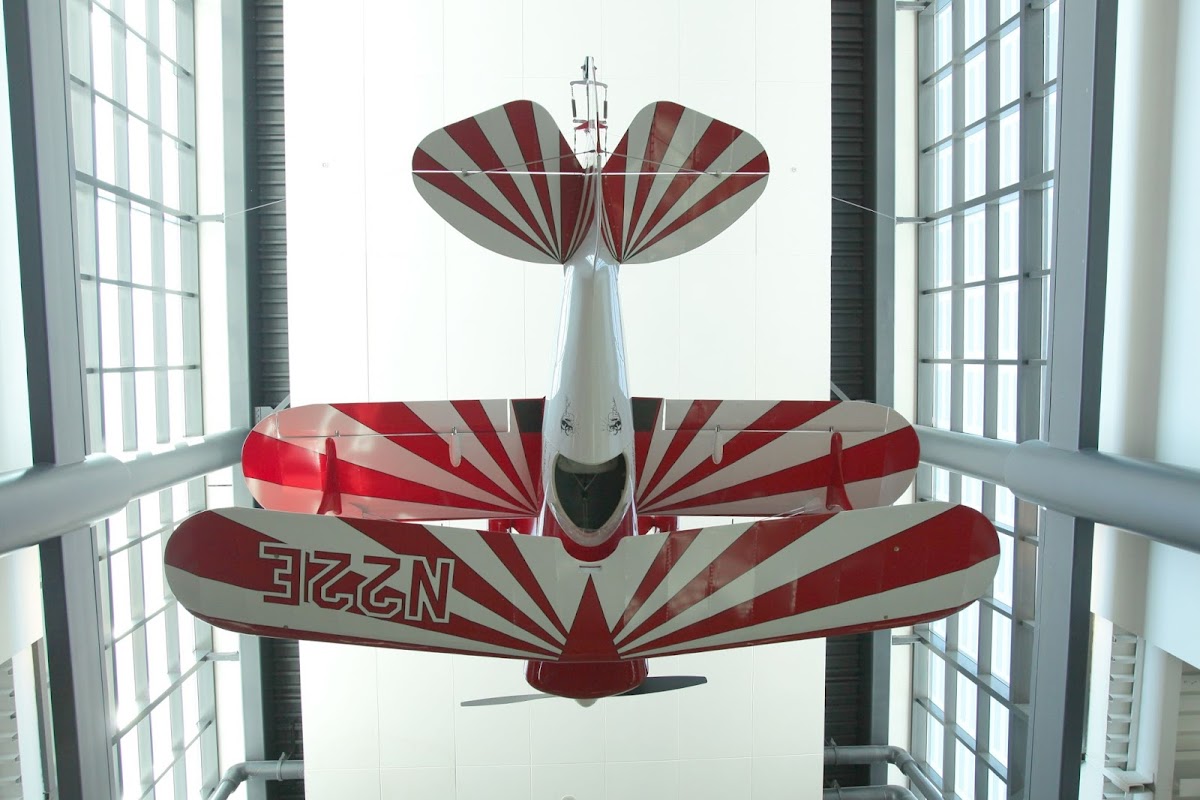 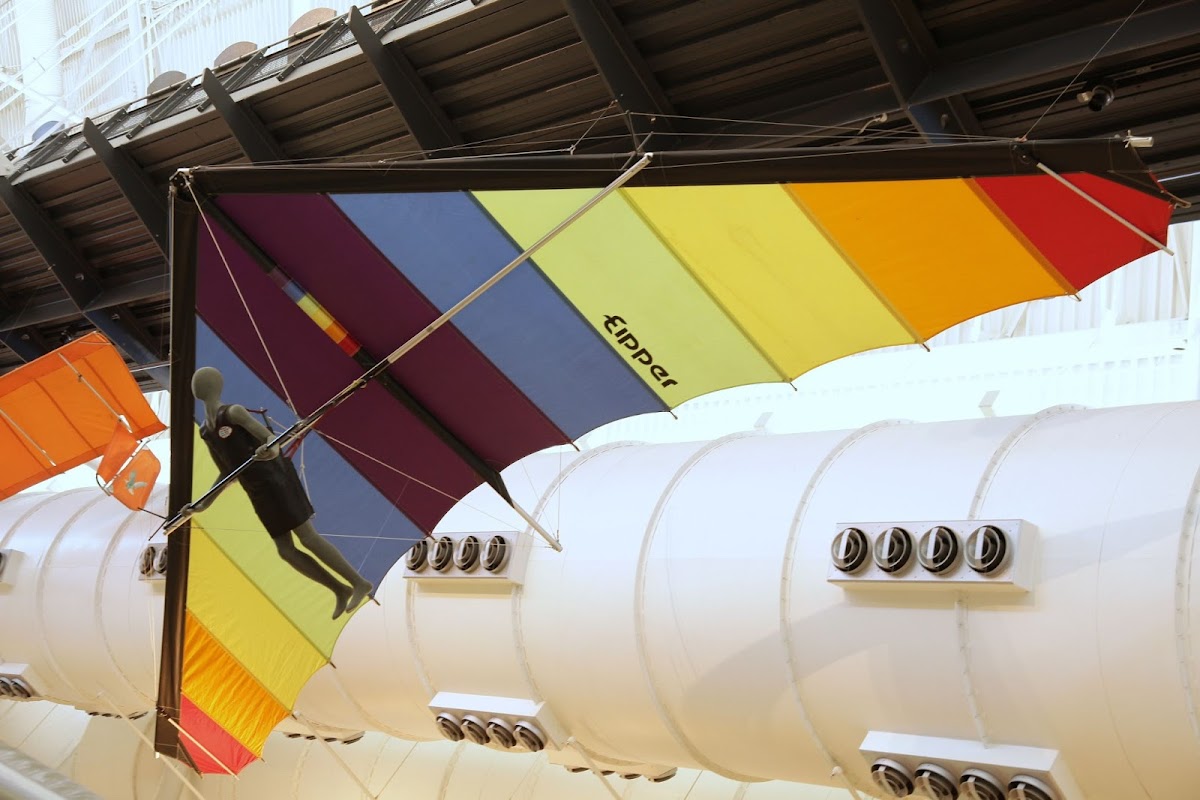 By the end of our visit, little Mary Deane, who has cystic fibrosis, and who is very much an observer rather than participant of social situations, was looking like this.  It made my heart very happy for her, and for my sister. 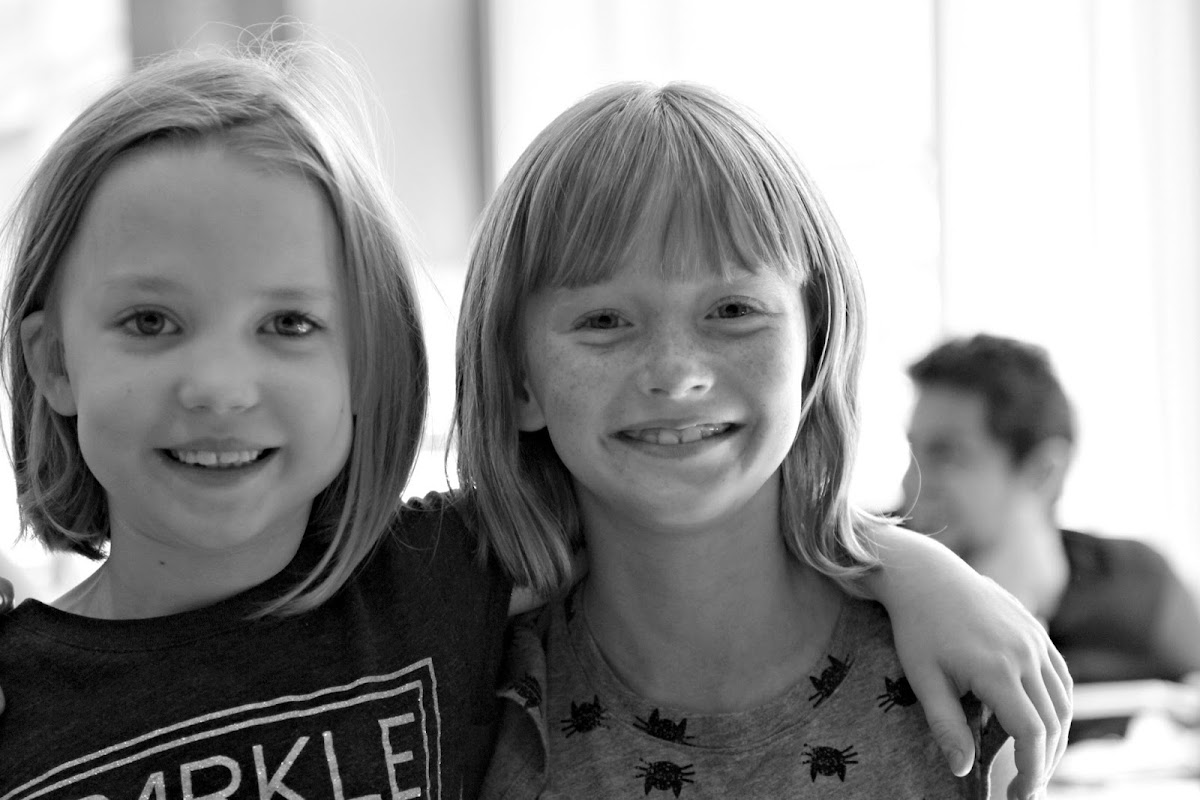 3 mamas who love their offspring and each other.  It was, as my mom always says, a little slice of heaven. 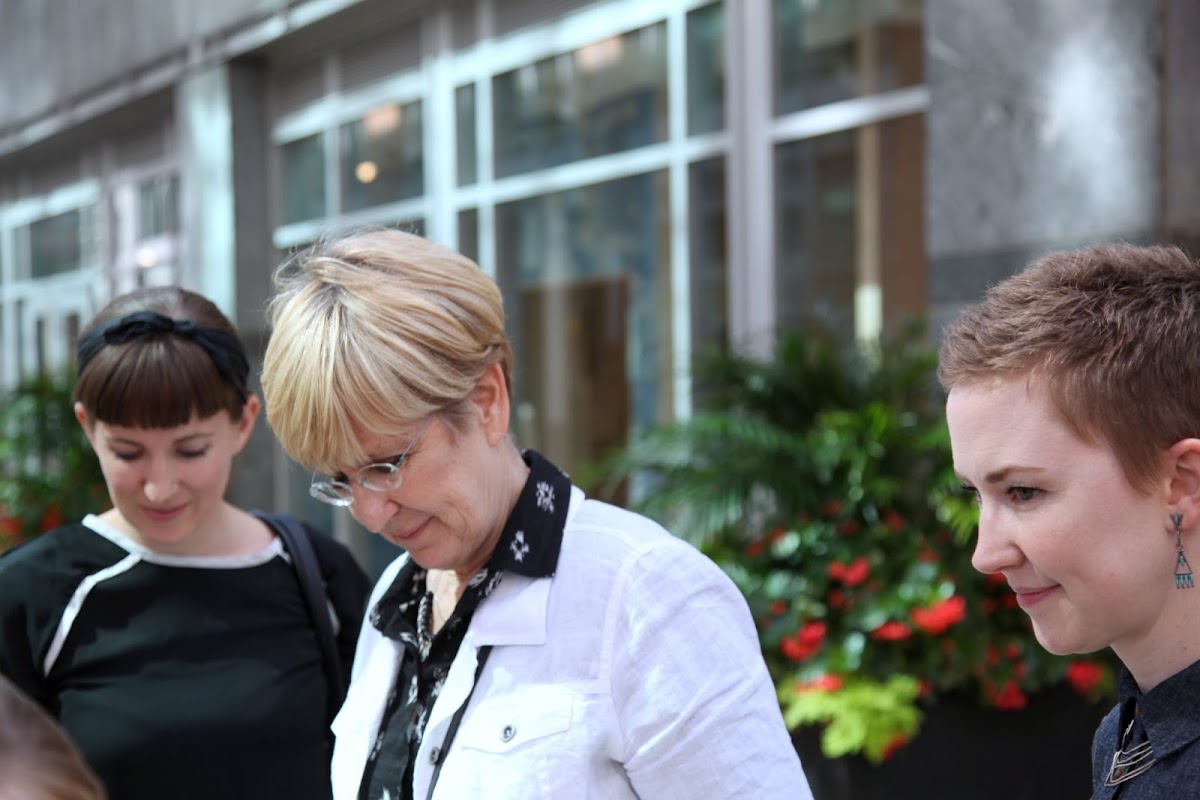