We're still in the honeymoon phase of our move-in, I suppose.  Once in a while I catch Ryan just wandering around and when he sees that I'm watching him, he'll give me a sly smile and say, I really like our house. 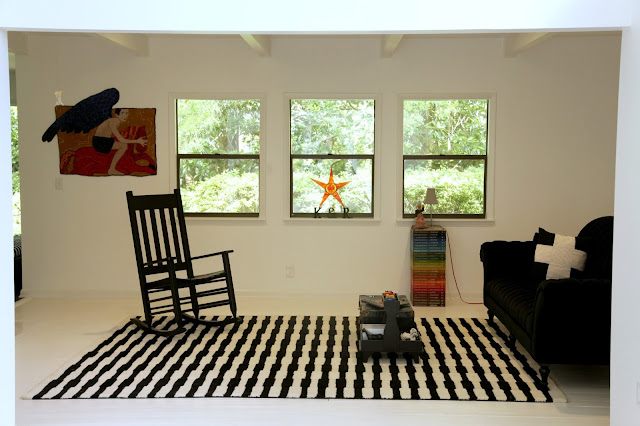 We've put so much work and time and money into it, yet there are still projects that need to be finished and more projects that I want to start.  Like this room.  I already have new plans for it. 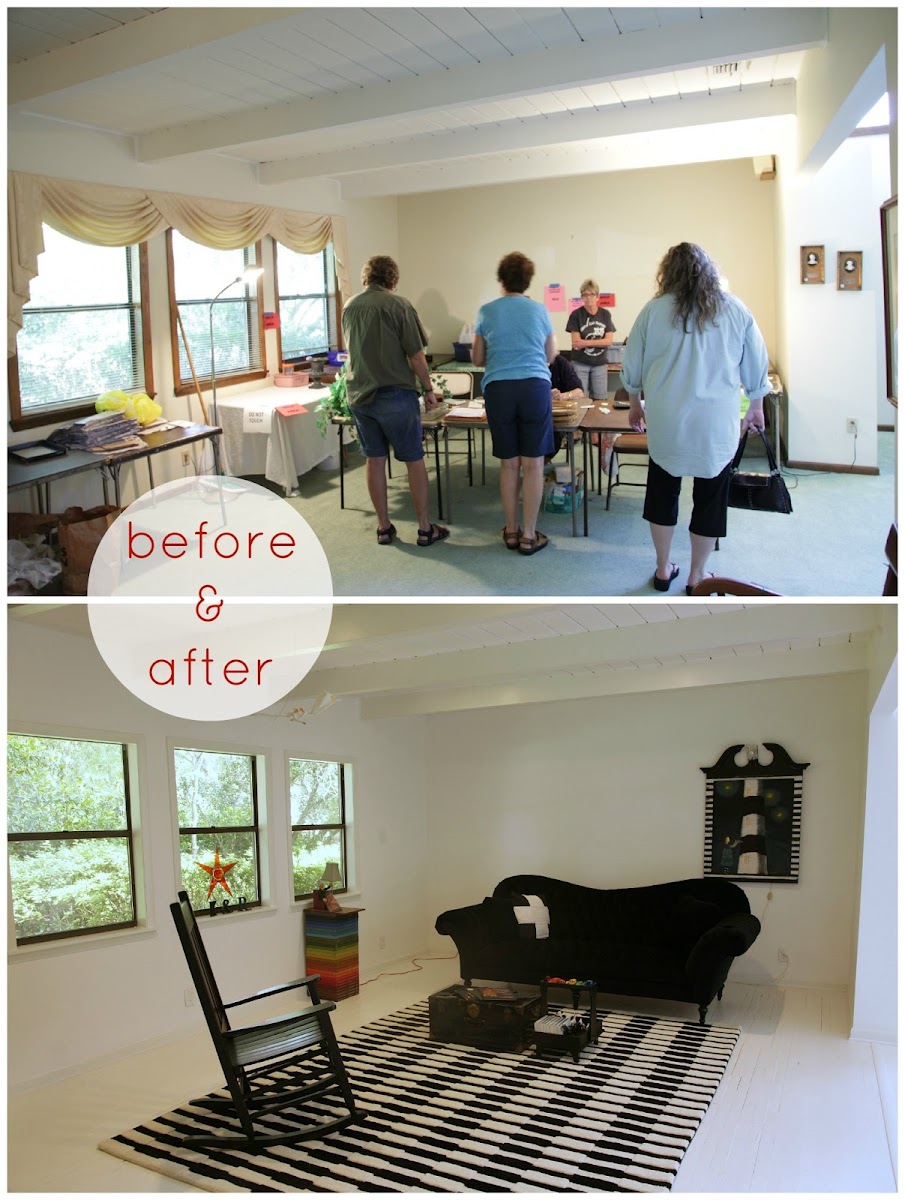 The floors held the secret that this was part of the original house.  We could hear them give soft creaks under the pastel aqua carpet, they were ready to show off once again. 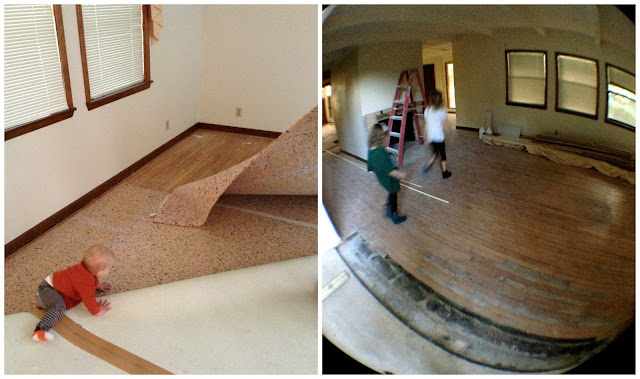 There were no major changes done to this room, which we call The Parlor, but the kids have started calling it The Lighthouse Room, for obvious reasons. 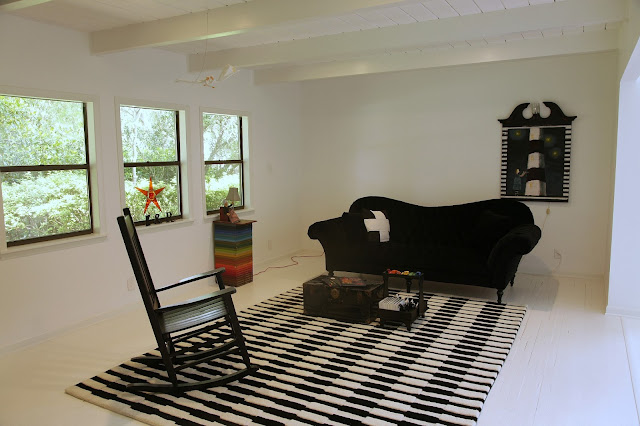 The floors and fireplace were pretty much given a facelift and walls slapped with paint.  The fireplace was tiled in a biege tile half-way up with a mantel.  That was one of the sticky issues when deciding what to do with the fireplace.  I voted mantel.  Ryan voted no.  Then where will we put stockings?  Which is kind of a lame argument, but I didn't take debate in high school, so I can't be faulted.  We both gave in to each other throughout this process, and I came around to the idea of a simple, solid facade.  And, who knows. I just might hang the stockings from the ceiling. ;) 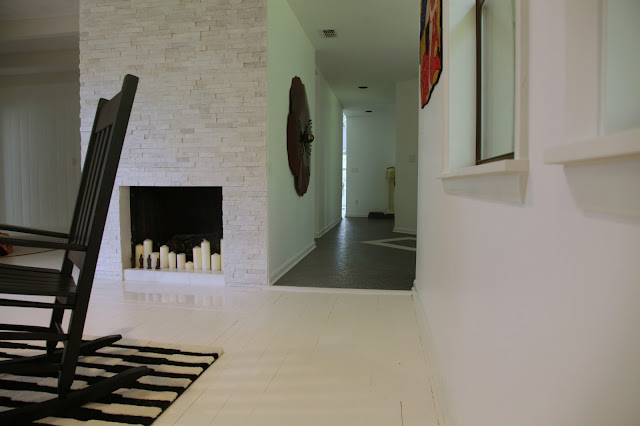 It comes off the left of the entrance with the half bath down the hall and the kitchen on the other side, in case you were wondering layout details. 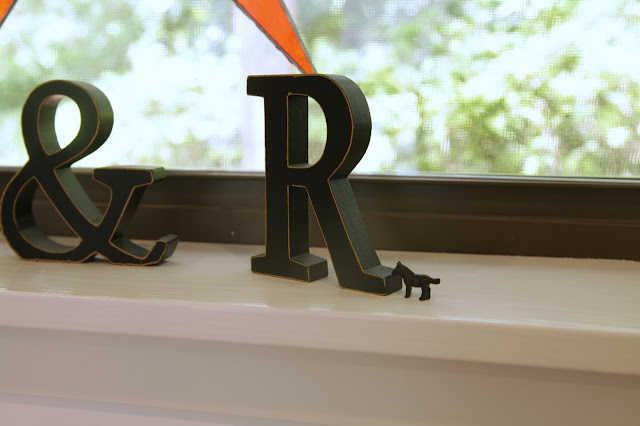 This old metal chest was left by the previous owner and the wooden (magazine?) stand I bought at his estate sale and painted a flat black. 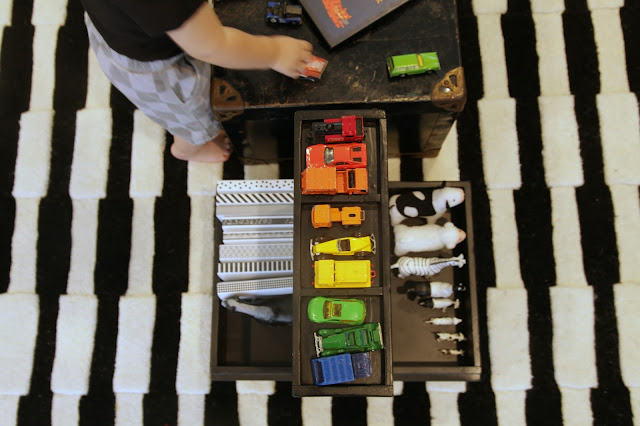 And those cars?! Those are from Ryan's boyhood collection!  We sat down one day and I think told me the history and detail on almost all of them.  I am just fascinated how Drummer is drawn to them.  We've had them around, of course, but none of the girls cared.  It's just so amazing how different he is. 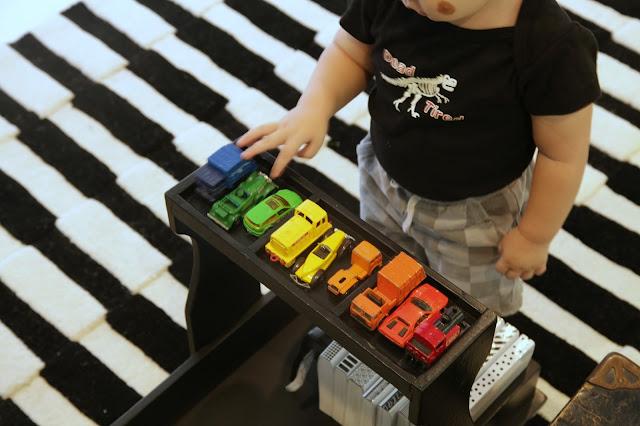 I also wanted to help remind us to read scriptures together as a family, but they needed to match, of course!  I covered each book in contact paper and then put a strip of washi tape on the spine with another strip of packing tape to keep it in place.  It would also be fun to let each child decorate their own.  Maybe my next project. 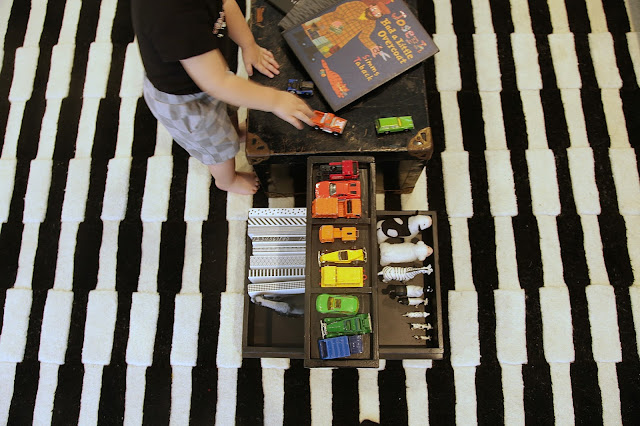 We used to have a record player, which made more sense to have a record collection.  The baby dills broke the speakers and so we got rid of it and this is one where Ryan gave in.  But, why do you want all those records if you can't play them?  And we all know the answer to that.  Rainbowtize. 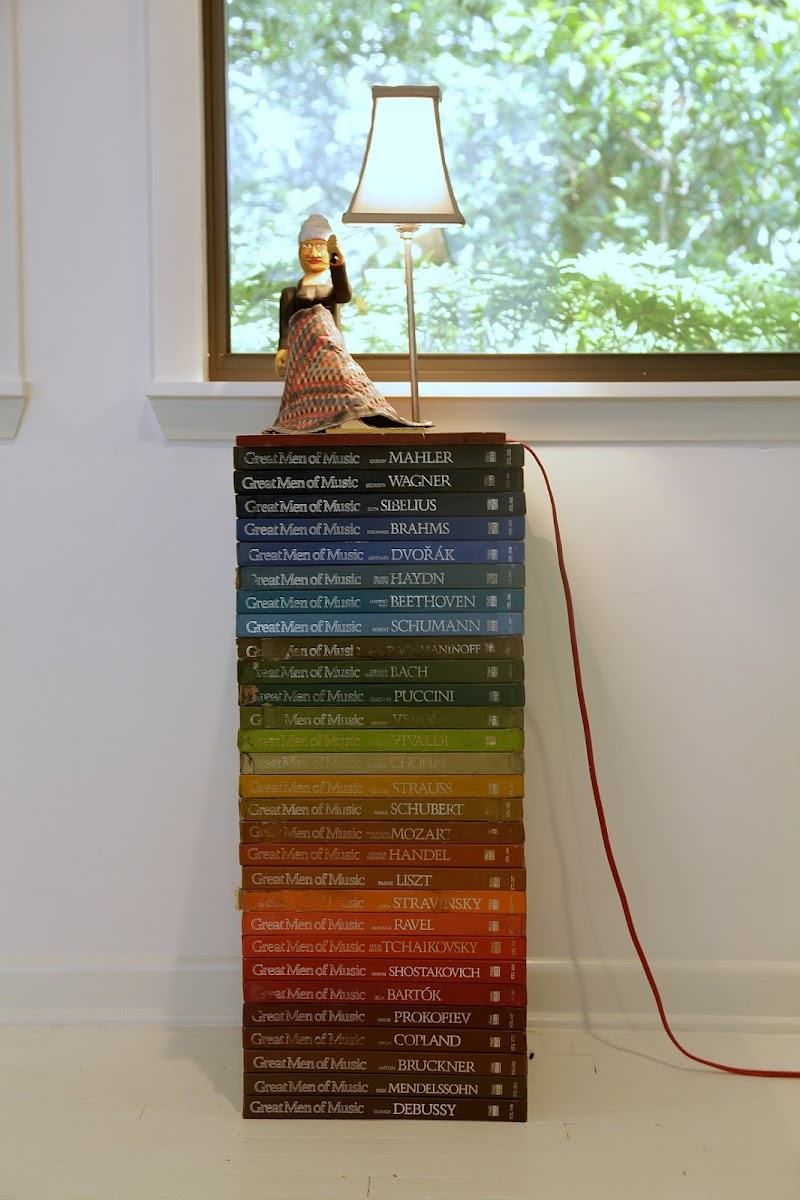 I inherited them from my parents and used to study about the lives of the composers.  Well, I got through about 7 of them at least.  I hope they're not offended that they're a side table now. 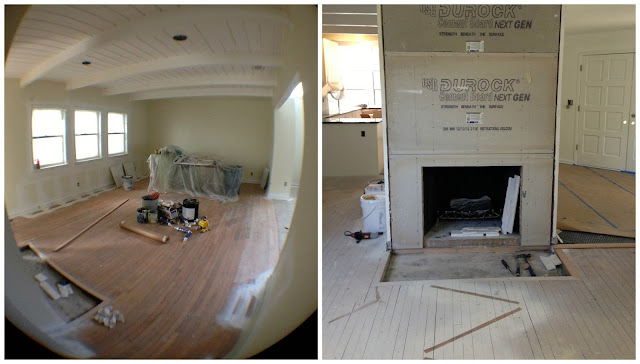 Ryan says this is his favorite room.  I try not to play favorites, but it is well utilized and comfortable, and I love the triptych windows. 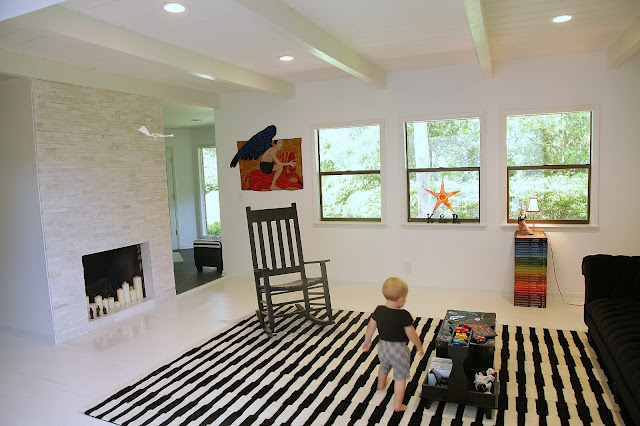 We have been couchless since we moved in until last week an early birthday gift came.  It smelled like hotdogs for a couple of days, but it is everything I wanted. 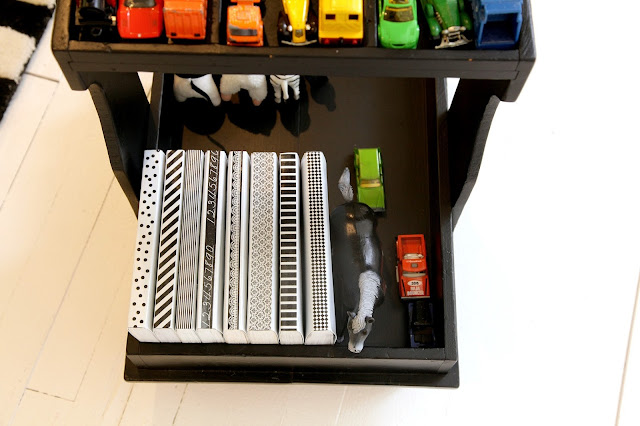 I know I kept our contractor guessing because, while I would be so persnickety about one thing, I didn't want the creaks or cracks of the floors fixed. He stopped trying to persuade me otherwise. 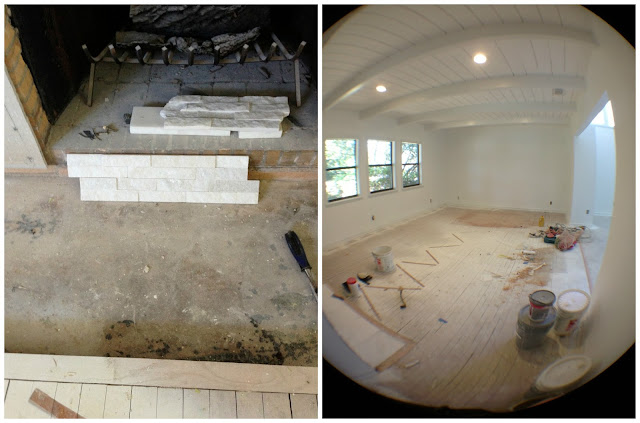 When my heart is set on something, good luck to the man who tries to pry it from my metaphorical grasp. 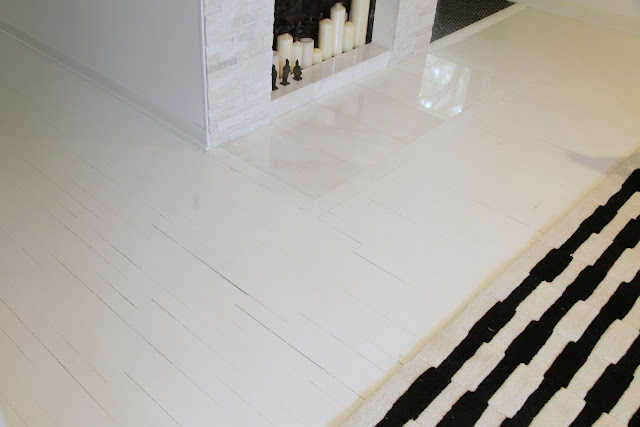 The ceilings?  They may have played a major role in the wooing process of buying this house. 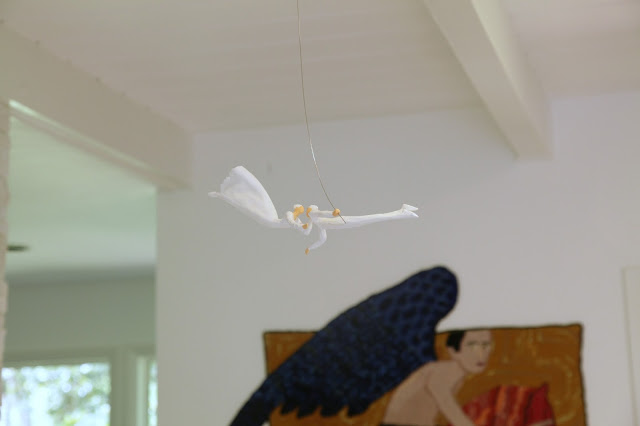 Some details: The paintings and lamp were done by my dad and the wool, hooked rug on the wall was done by my mom. We bought the giant hibiscus at a traveling art show. 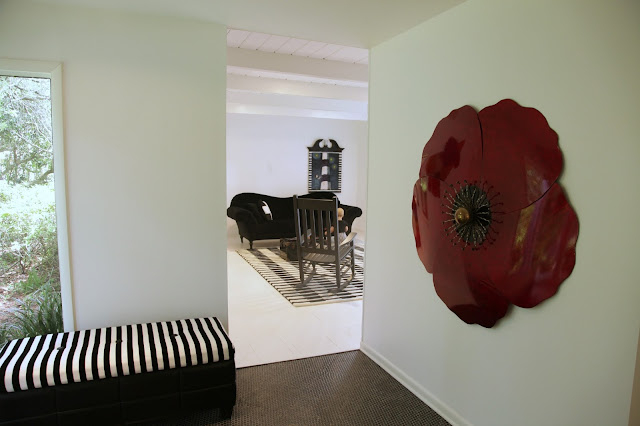 Have a happy Thursday!