I couldn't resist the title.  There were all sorts of puns I could have used for this one.  As promised from Drummer's little cowboy snap suit, I've put together a snap tutorial.  I've had a love/hate relationship with snaps, but they, in the end, have won me over, after I learned their wily ways, which I will share with you. 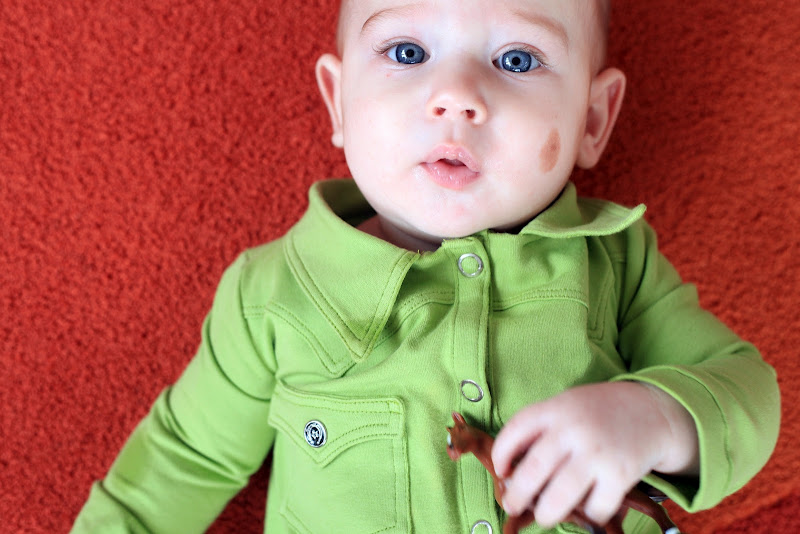 So.  We will start with the basic snap that requires no extra fancy tools.  I like these because they are super simple to use.  The only drawback is you can't use them on a whole lot of layers.
Here are the parts:
Each side has a prong half that will fit into the piece.
Pretty straightforward, just make sure the prongs are all inside the opposite circle.  Both halves are applied in the same way.
Sometimes they come with a fancy little tool, but you can use a sturdy spool of thread, fitting the snap center in the hollow of the spool.  Hammer lightly, but straight down, not at an angle, until it is securely fastened, like your airplane seatbelt.

★ Troubleshooting:
If you find your snaps don't stay on, either you're not pounding it hard enough, or you have too many layers for the prongs to go through.

If your snap won't stay snapped, lightly tap the stud part of the snap with a hammer (this works on commercially made clothes as well).  This will broaden the stud and make it stay put!

Next is the Anorak Snap.  I like these because you can use them on thicker layers.  They are a bit trickier to attach but they are super strong. Notice that you need to have the corresponding SIZE tools.   Don't try to make it work with anything else.
These are the tools.  When I first pulled out the piercing attachment I thought, there's no way this little thing will cut through 5 layers of knit.  Not only did it puncture all layers, but it went all the way through the protective disk!  Oops.  You will be using the attachment holder in each step of this process.

The Anorak snaps also have 4 pieces.
Start by marking with a pin or fabric marker where you want to put your snaps, then pierce a hole using the piercing attachment with the disk underneath, tapping with a hammer and checking occasionally until you've gone through all the layers.
Next, attach the top snap with the rounded portions facing the corresponding attachments.  Make sure part b is centered on part B.  (Yes, I've italicized and bolded it!)  I went through several snaps not attaching properly until I realized this was my problem.  Even though it stays on the attachment tool, it doesn't mean it is ready to use.
Finally, attach the bottom stud, which is the easiest part.
★Troubleshooting:
If the upper snap won't stay on, you probably have not centered part b on part B, or you're not hitting it hard enough.

If you have a hard time opening the snap, pinch the stud all the way around with some needlenose pliers to reduce the size.  I did this on all my snaps because these are really strong!

That's it!  Once you get the hang of putting them on, you might abandon all other methods of closure! :)


Pattern came from Ottobre Spring 2012--intended for Mr. Drummer, but will have to wait until he's a few inches taller :)