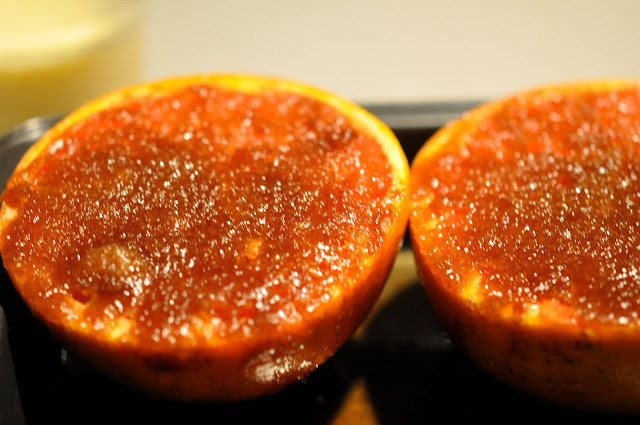 The first year of our marriage, Ryan and I housesat my Aunt Carol and Uncle Sterling's dream house:  The house they were finally able build after all their children had grown and gone.  Surrounded by horse pastures with walls of windows and a kitchen with cobalt blue tiles, a stairway built with thick, round lumber, and a subzero fridge, yes, this is how we began our marriage.  We would only keep the heat up in the south end of the house where the master bedroom was, which meant the kitchen would be freezing each morning.

Enter the broiler.  Broiled anything ought to be watched, which made for a perfect chilly morning breakfast, and thus we acquainted ourselves with broiled grapefruit.

The two keys:  1-have well chilled grapefruit and 2-have a well pre-heated broiler.  That way, the top gets crispy while the rest of the grapefruit flesh is still cold.

Cut each grapefruit in half crosswise.  Cut a thin slice off the bottom of each half, if necessary, so that it will stand upright (you want to keep that yummy topping on top!)

Using a sharp knife, loosen the grapefruit segments in each half by first carefully cutting between the fruit and the peel and then by cutting along either side of each segment to free it from its membrane.  Leave all the segments in their shells.  Place the halves upright in a baking dish.

In a glass measuring cup, melt butter and add cinnamon and brown sugar, mixing until evenly distributed.  Using your fingers, sprinkle the sugar mixture evenly over the grapefruit halves.  Slip under the broiler about 4 inches from the heat source and broil until the sugar is uniformly bubbly, 2-3 minutes.