Katy IS a Big Deal

Disclaimer: This post was hi-jacked by Katy's most adoring admirer. 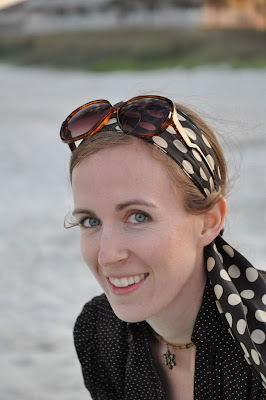 She has a birthday coming up and is quickly catching up to her husband's age.
And he A D O R E S her.

I met her 10 years ago; it was a fantastic Summer.
She would bring my roommates bakery bread after her work.
I observed her for months, and I often would picture her as the ONE.
One day, I learned she can play the Harmonica.
On another, I found her under the family car changing the oil.
Then there was the time, I mentioned that I really liked Katy and 3 guys in the group told me that they planned to date her.
I proposed in the Ward garden. More of a query; A gauge in her interest in me.
She responded she was interested, but would not be able to marry until after 18 months.
Yes, it broke my heart. But she has mended it many times. She knows everything about me. And keeps it interesting as I keep discovering her.
Did you know she is skilled as a Ninja? AND is the one who catches the lizards.
When I tell the story, I always include what transpired--she proposed to me--as we rode the escalator one floor up. From me, stunned silence. Huge smile. I said yes, and it was sealed 1 month later.
We know we were meant for each other--its true--we are a better than a satisfactory match, we are perfect compliments.
And I have been lucky ever after and forever to come.
KATY: you are beautiful. I love you.

Email ThisBlogThis!Share to TwitterShare to FacebookShare to Pinterest
Randomly Filed under birthday