Normally, a purple flag would not create a concern to me. But, living at the beach, it does. Sharks. Manatees. Man-O-Wars. Each day the life guards put flags up to inform beach goers of the ocean status. Usually, they're yellow. Swim in front of life guards. Sometimes red. Dangerous conditions, rip tides possible. Purple, however, has only appeared once. Today. Of course, there are always those who don't heed the warnings. They are out there with their boogie and surf boards, venturing into the water where one can only see what is on the surface. Perhaps it gives them a thrill to know there is danger possible. Why do we like to push the limits? Walk on the line instead of far from it? Pay no heed to warnings from those who know?
That is the relationship of parent and child. I don't tell my kids "little white lies" to make parenting easier. I tell them the truth or simply tell them it is something they don't need to know. My philosophy is that if I'm honest with them all the time, they will learn to trust and heed what I tell them. I'm hoping my theory isn't flawed. I'll let you know..in about 8-15 years. 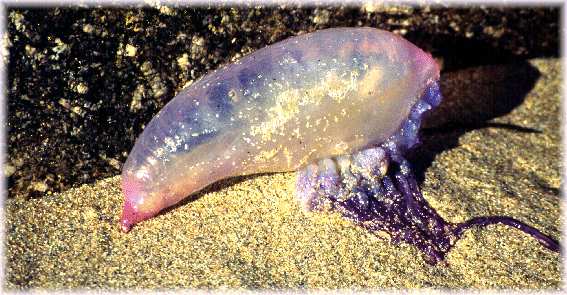 The sting of a regular jellyfish (they say) is uncomfortable, the sting of a man-o-war (see above) is dangerous
Created by Big Black Car Beatz