Happy Number One to Number Four! 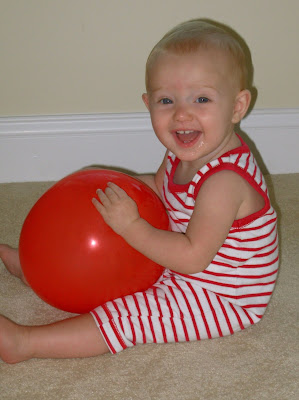 It has been a major year for this little one. She didn't have a name for 3 weeks after she was born, and now she can say "Azure", as well as mama, dada, button (gammy taught her that one), hi, among others, and knows the sign language for "more" and "eat". She's not interested in walking just yet, but then again, she has 3 sisters who will drag her anywhere interesting. She is still mistaken for a boy, as each of our girls have been with their hair growth, or lack of. Hers is a strawberry blonde. With a mouth full of teeth (8 now) she will tackle anything that comes in her way, and she has even been known to eat spiders. She's a good little vacuum.

The year has also been full of other changes, some not so small. Cousin Hazel was born just months later, we up and moved several states east, Ann returned from her mission, then married Brendon shortly after that, Granny Kunz passed away, and Ashley and Brian announced they were expecting a little of their own. An eventful year, no?