Back in February I asked Pearl what she wanted for her birthday.  She gave me a choice.  So nice of her.  Either a bow and arrow or she wanted to breed bunnies.  My vote was bow and arrow.  It seemed less involved, until there was an incident involving a homemade bow and arrow and a near eye-loss experience. 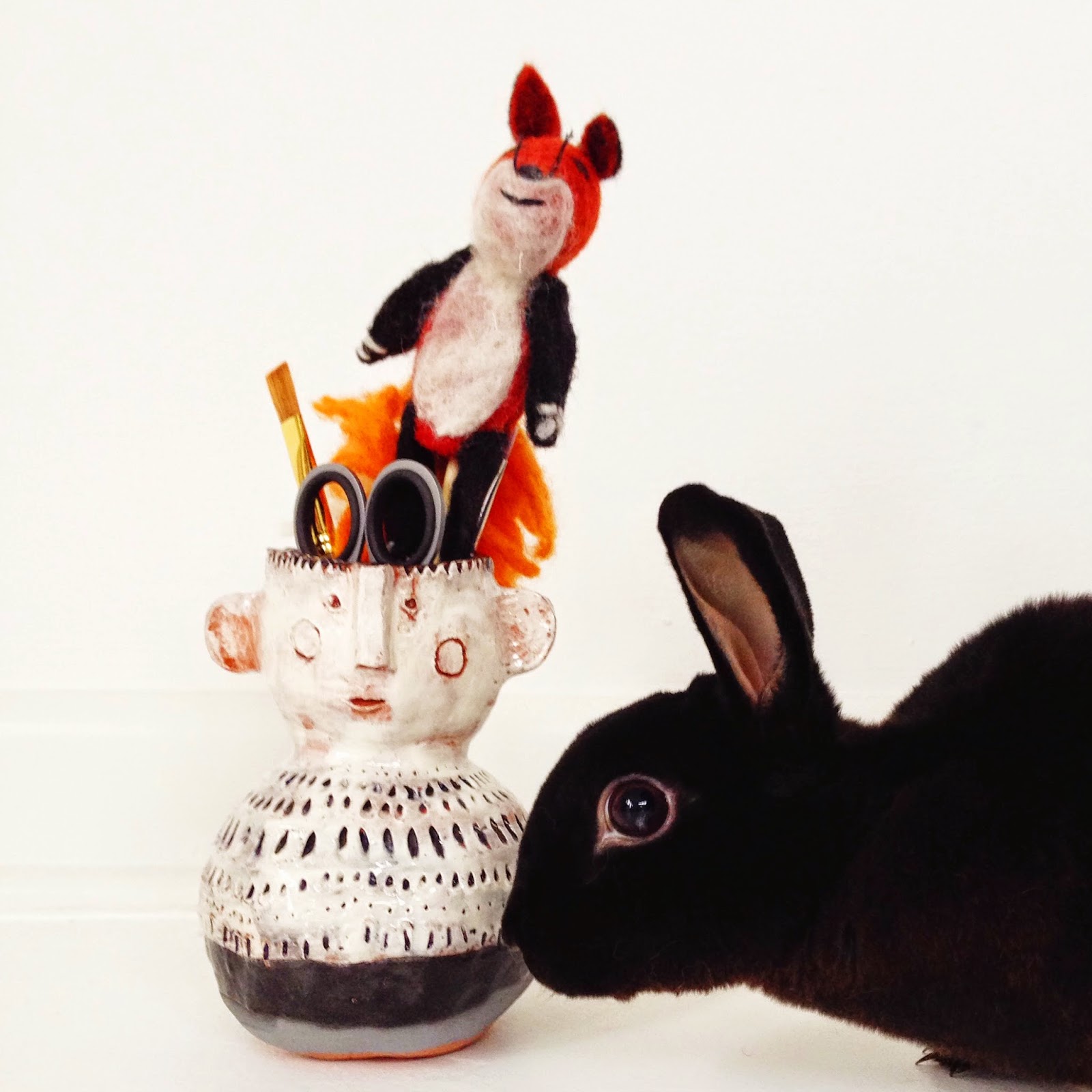 If you follow me on instagram, you'll know this is Prince, the bunny with one good eye who Pearl chose as the father because she was afraid nobody else would ever take him home.  He has won our hearts. Penny, the doe, we thought was uncooperative.  We tried time after time to get them to breed and assumed it was a failure, and breeding bunnies wasn't nearly as easy as all the cliché sayings and songs suggest.  We began to look for a new doe for our sweet Prince. 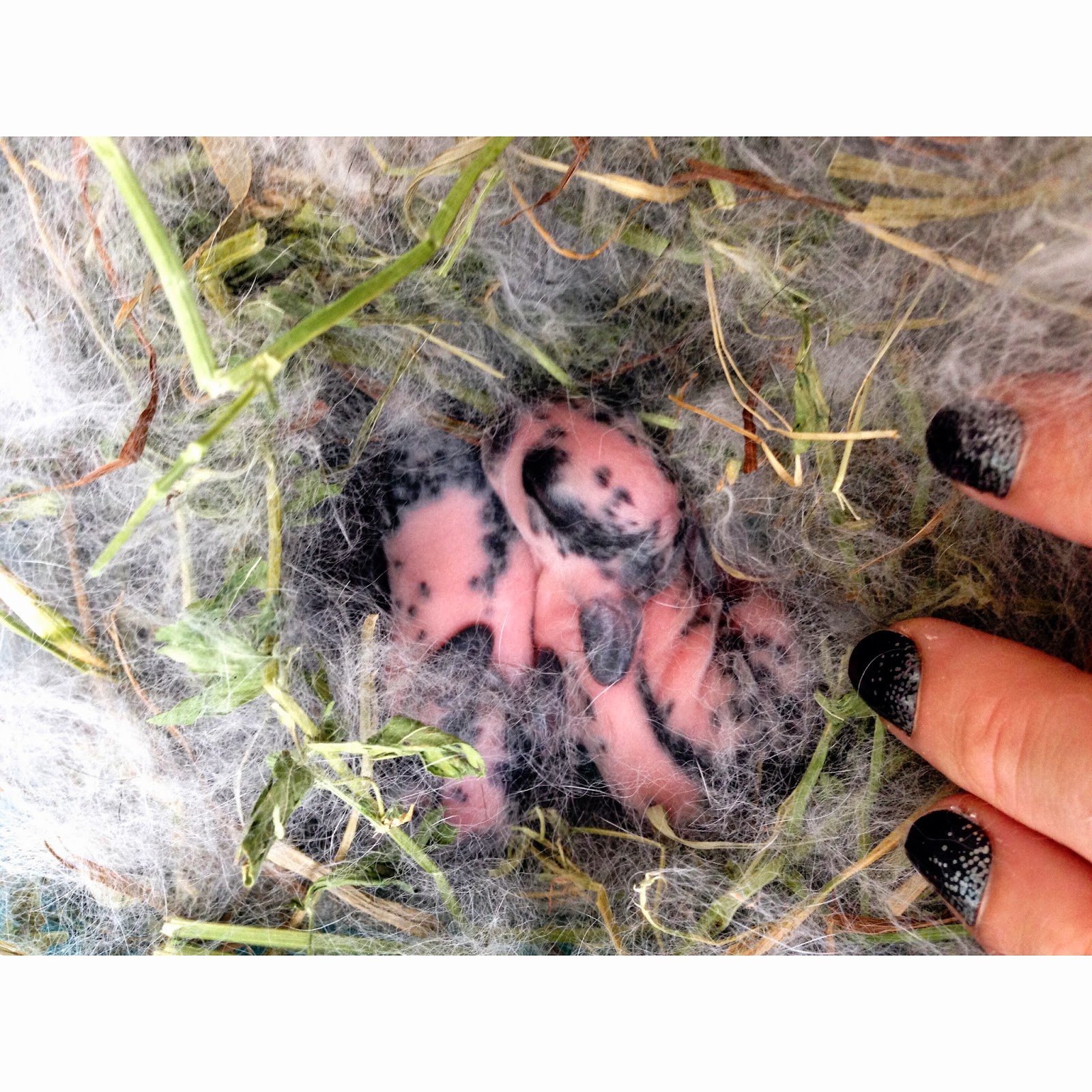 Until one day we noticed Penny had started pulling fur to make a nest, a sign that they are pregnant.  We have had bunnies in the past, however, who have done this and they all turned out to be "false pregnancies".  Pearl and I counted back the days when we tried to breed the two and figured if she was indeed pregnant, she was due very soon.  I palpated her, but as I forgot to go to school to become a veterinarian, I wasn't positive she was pregnant, but very suspicious that she might be.  We put a nesting box and lots of hay in her cage, just in case. 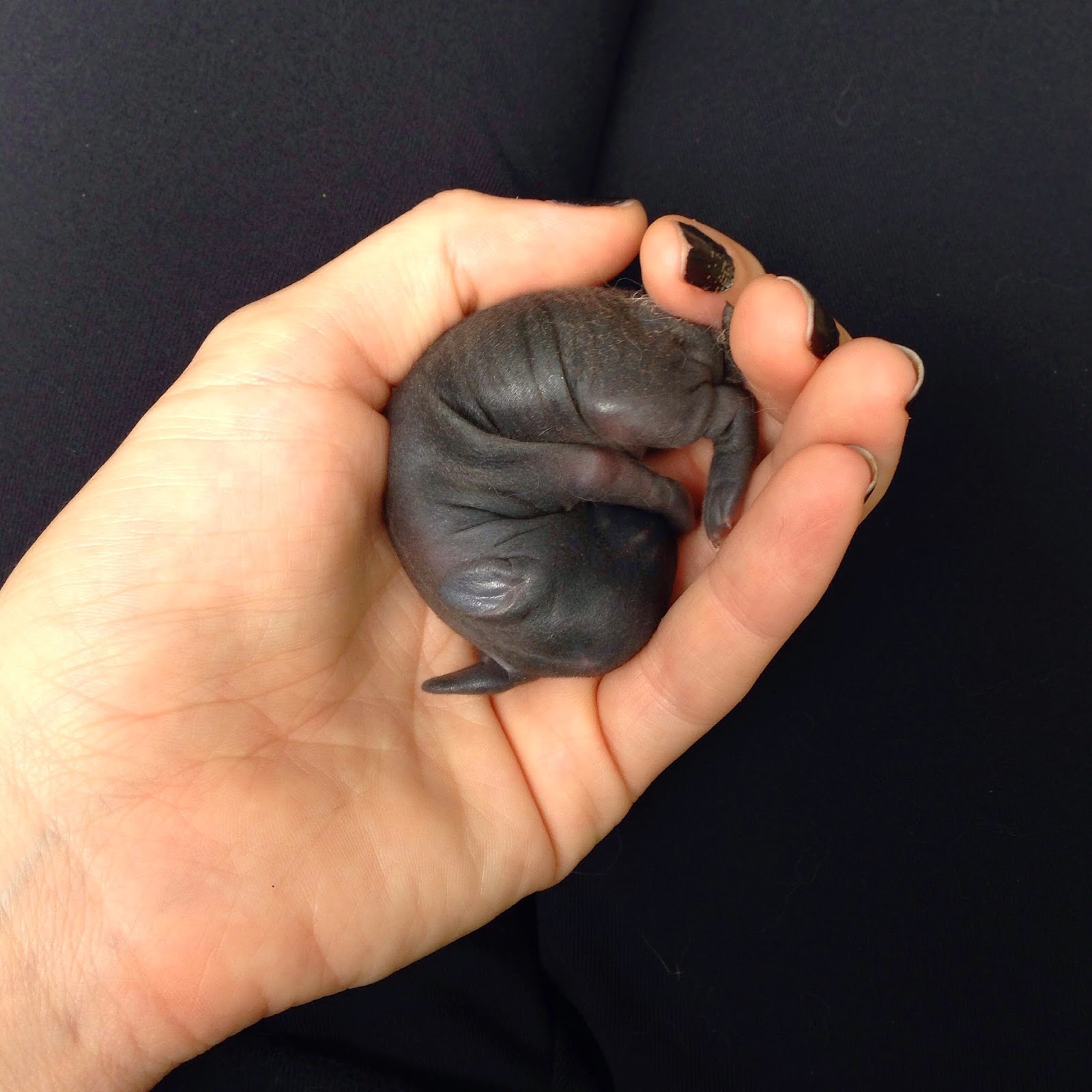 The next morning, I felt like it was Christmas as a child.  I ran outside and saw what appeared to be an exploded fur ball in Penny's quarters, particularly concentrated in one corner.  I reached my hand in the softest mound you could imagine and felt a warm, squirmy little body.  I wanted Pearl to be there to share in this moment, 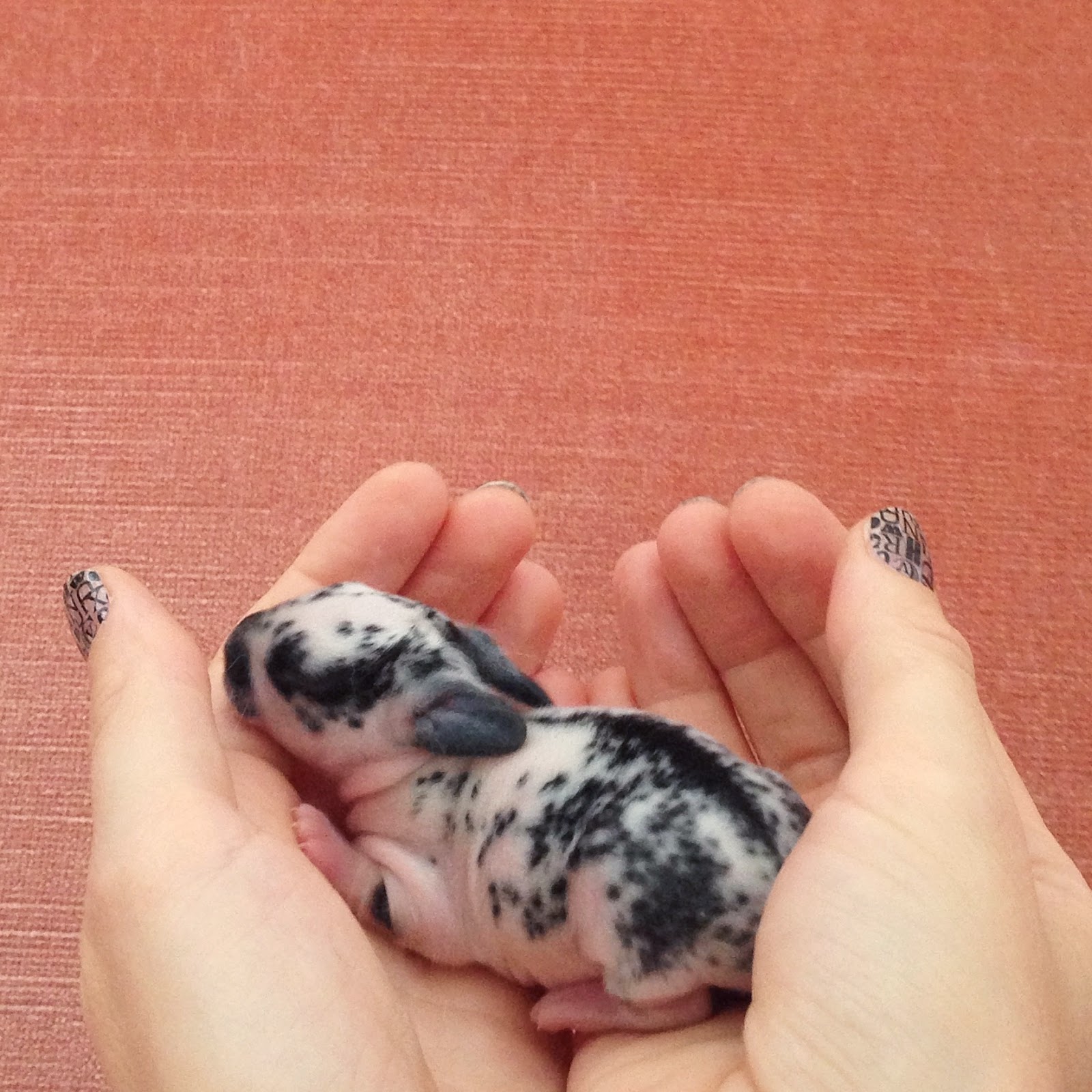 so I ran to tell the kids and Ryan that Penny had her baby(ies?) in the night.  Ryan looked at me with skepticism and raised brows that almost touched the ceiling.  I smiled back, perhaps a bit smugly, and said, "It's true."  The stampede made it's way to the backyard where I reached inside once again and began counting the tiny bunny bodies.  One *gasp!*, two *gasp!*, three *GASP!* 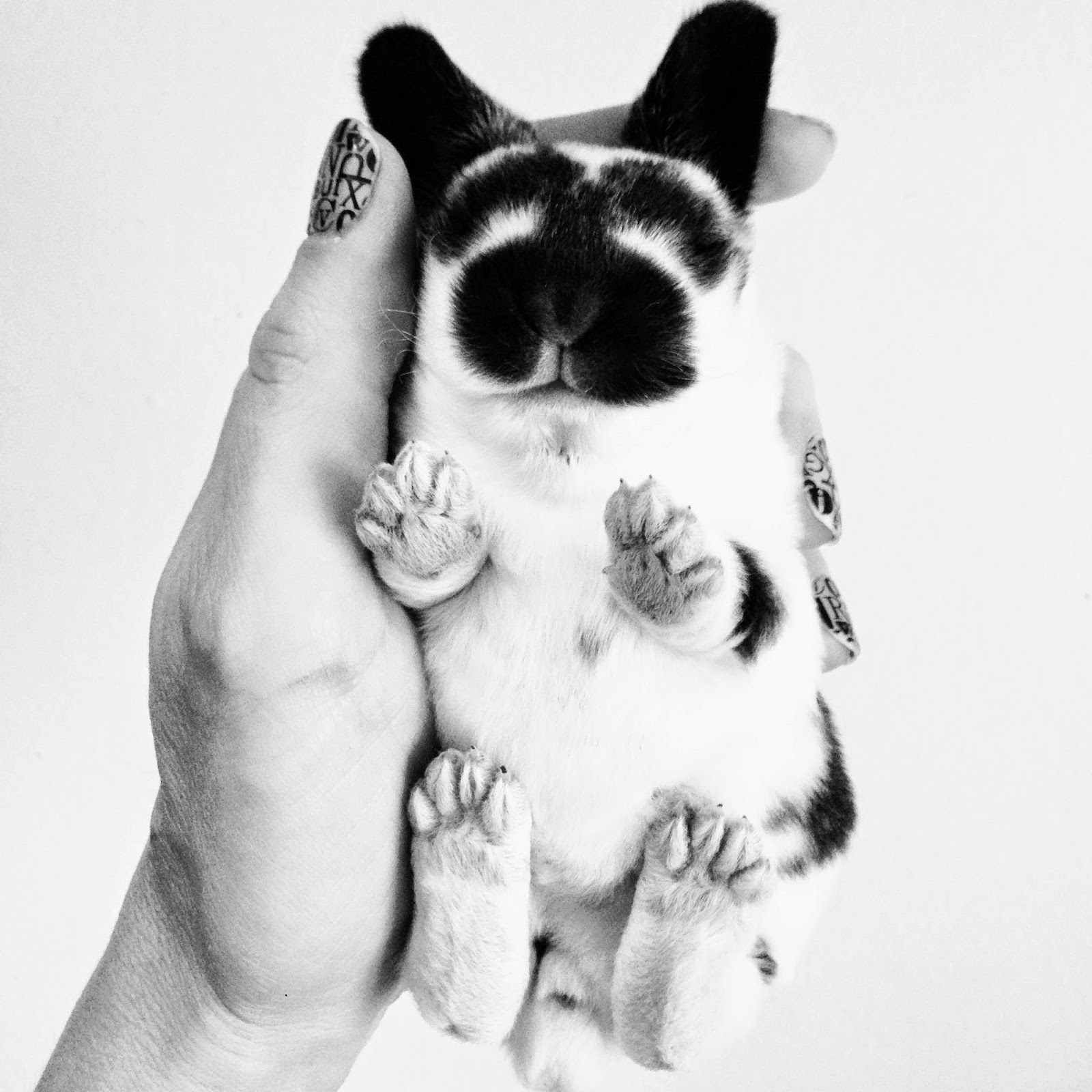 Many first time mothers let their litters die because they're not sure what to do, but our little Penny did a fabulous job.  Mother rabbits don't stay by their babies, like many other animals normally do.  They nurse them a couple times a day and leave them on their own to avoid drawing attention from any predators.  The babies stay close to one another for warmth and open their eyes after about 7-10 days.  They can have anywhere from 1-8 babies in a litter. 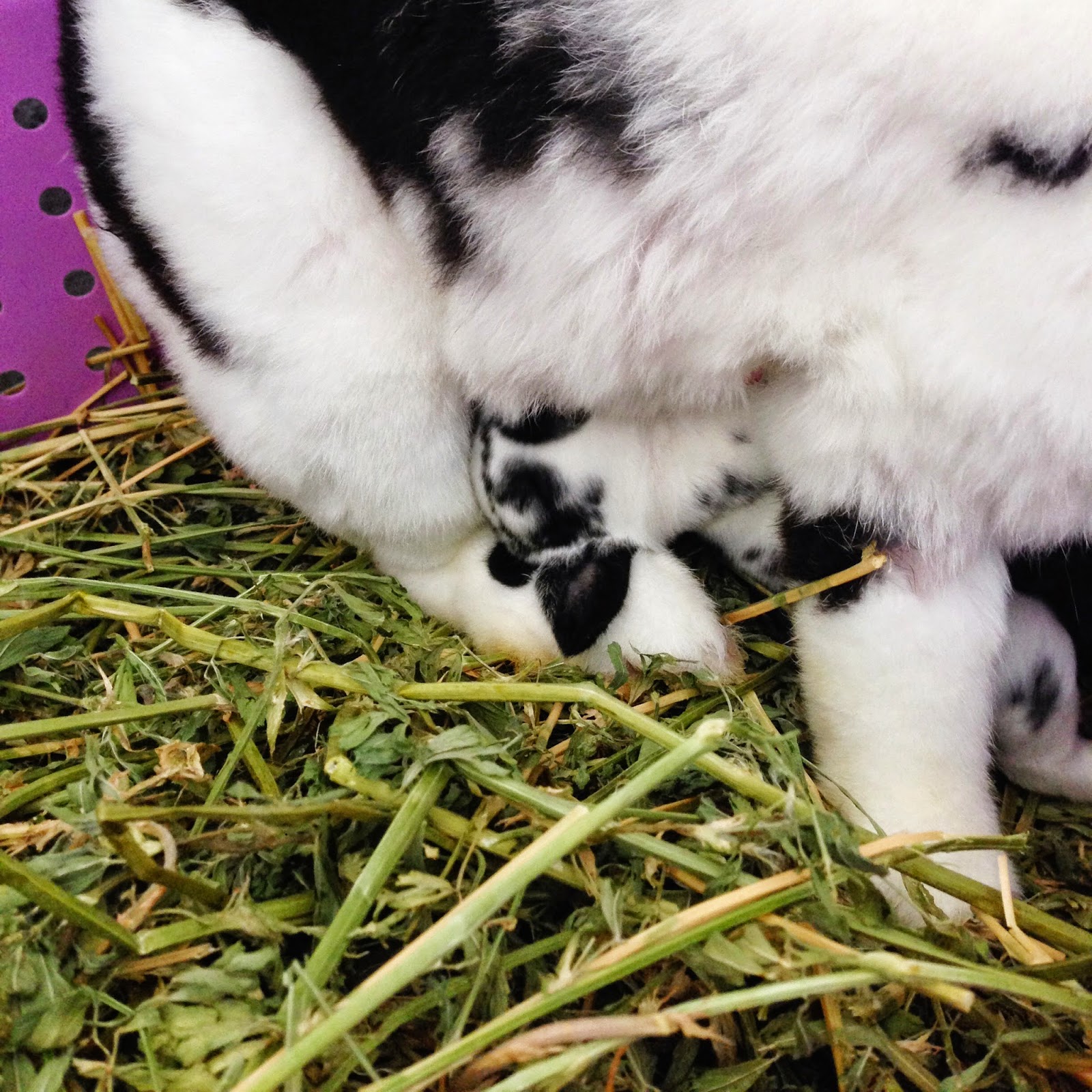 A rare moment to be able to catch the babies nursing, this one hanging upside down like a bat to get that sweet milk. 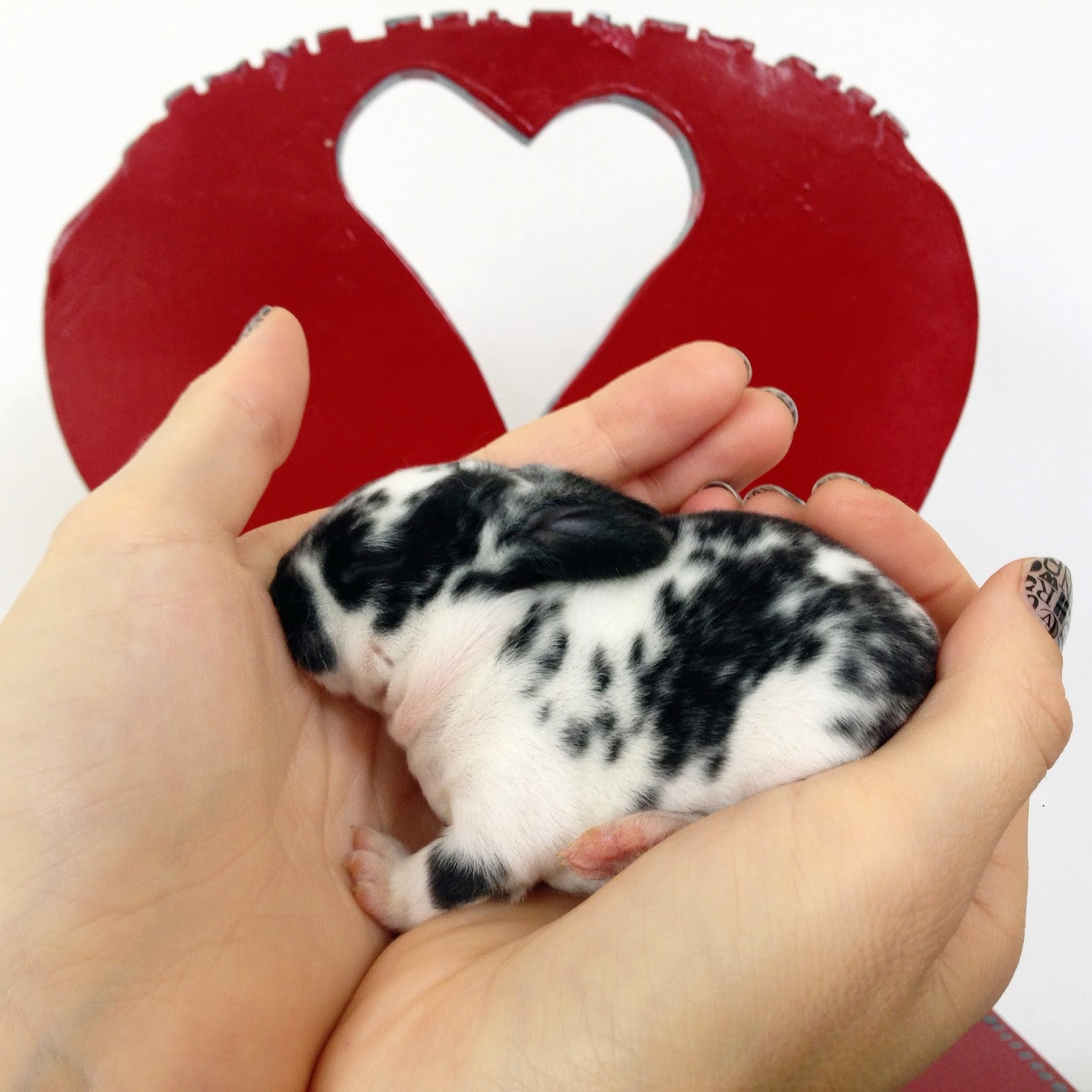 Penny did such a great job of nursing these babies and they soon turned from small, sleepy, squirming, squeaking runts, to plump, playful, puffy buns. 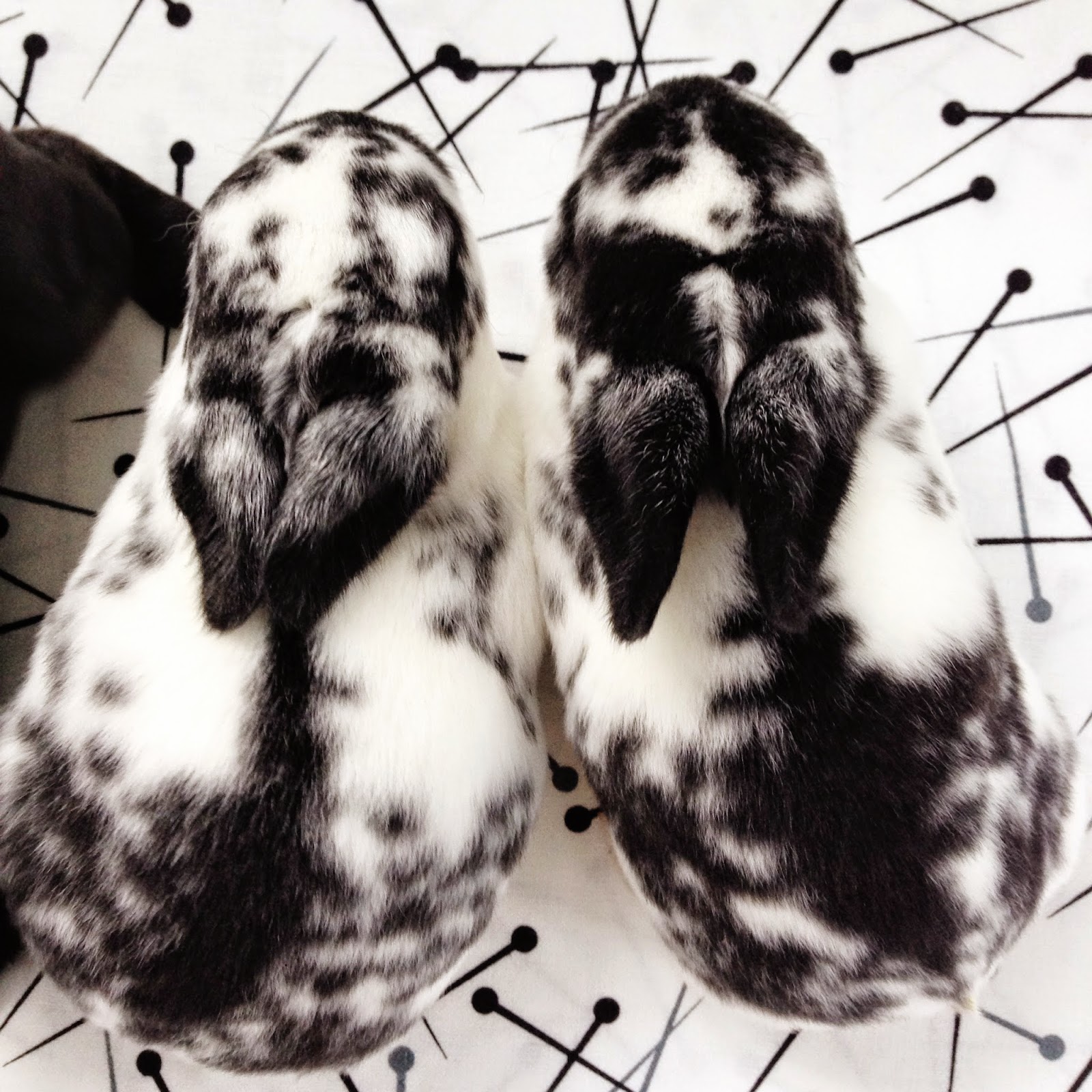 Pearl and I brought them in this morning to take photos and Ryan was shocked (once again) that these were the babies.  "They're so big!"  Just a few short weeks and they are ready for new homes. 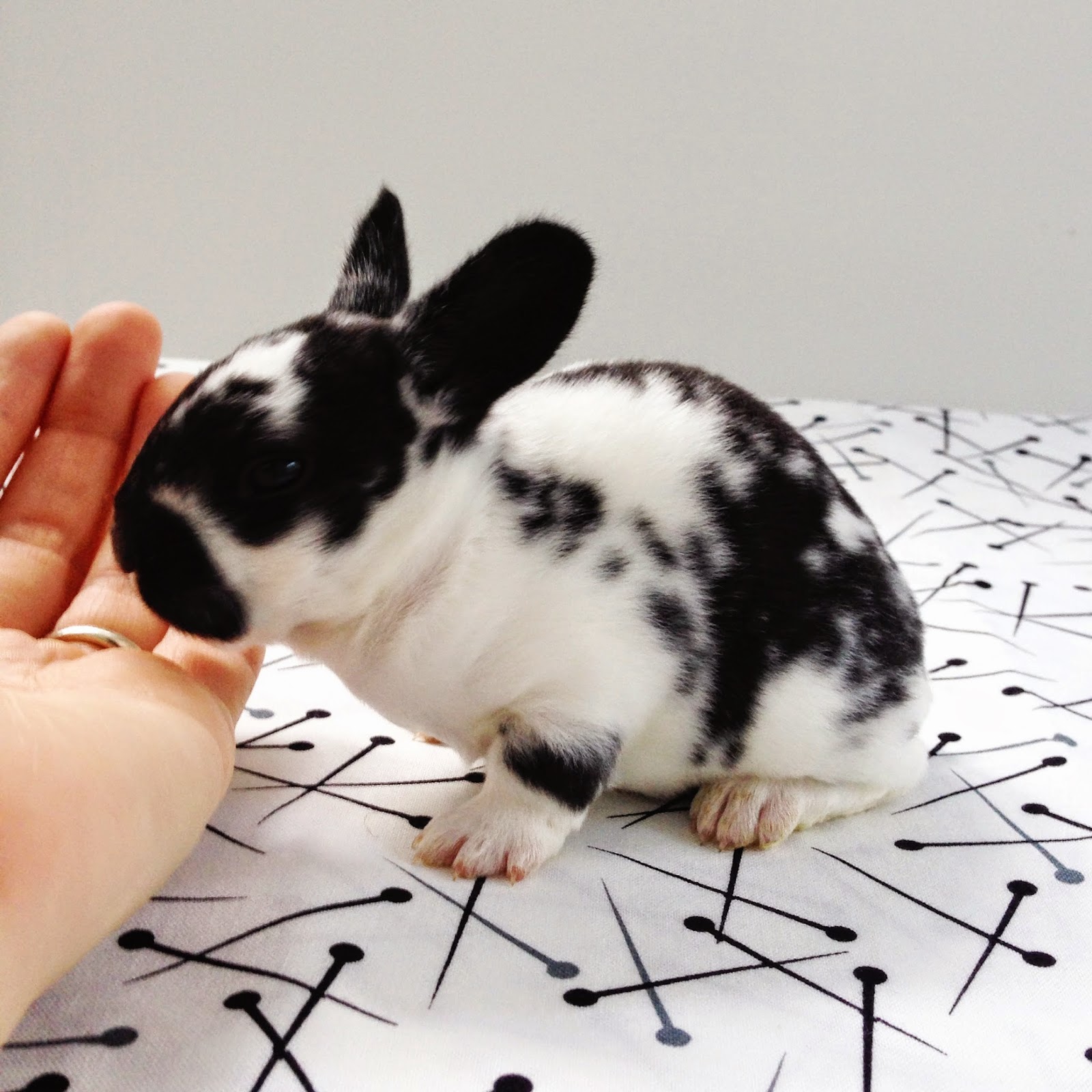 How did that happen so fast?  So it is with our own litters. With young children, grand perspective is so elusive.  We know, in the back of our heads somewhere, that they will grow up and leave home, but in the midst of the potty training, laundry folding, homework completion, ballet lessons, basketball games, and everything else that seems to fill the minutes of each day, that whispering, transparent perspective sometimes blends so well, going unnoticed until we happen to look through old photos of our child who was just learning how to walk, yet somehow wants a phone for Christmas and is already talking of driving. 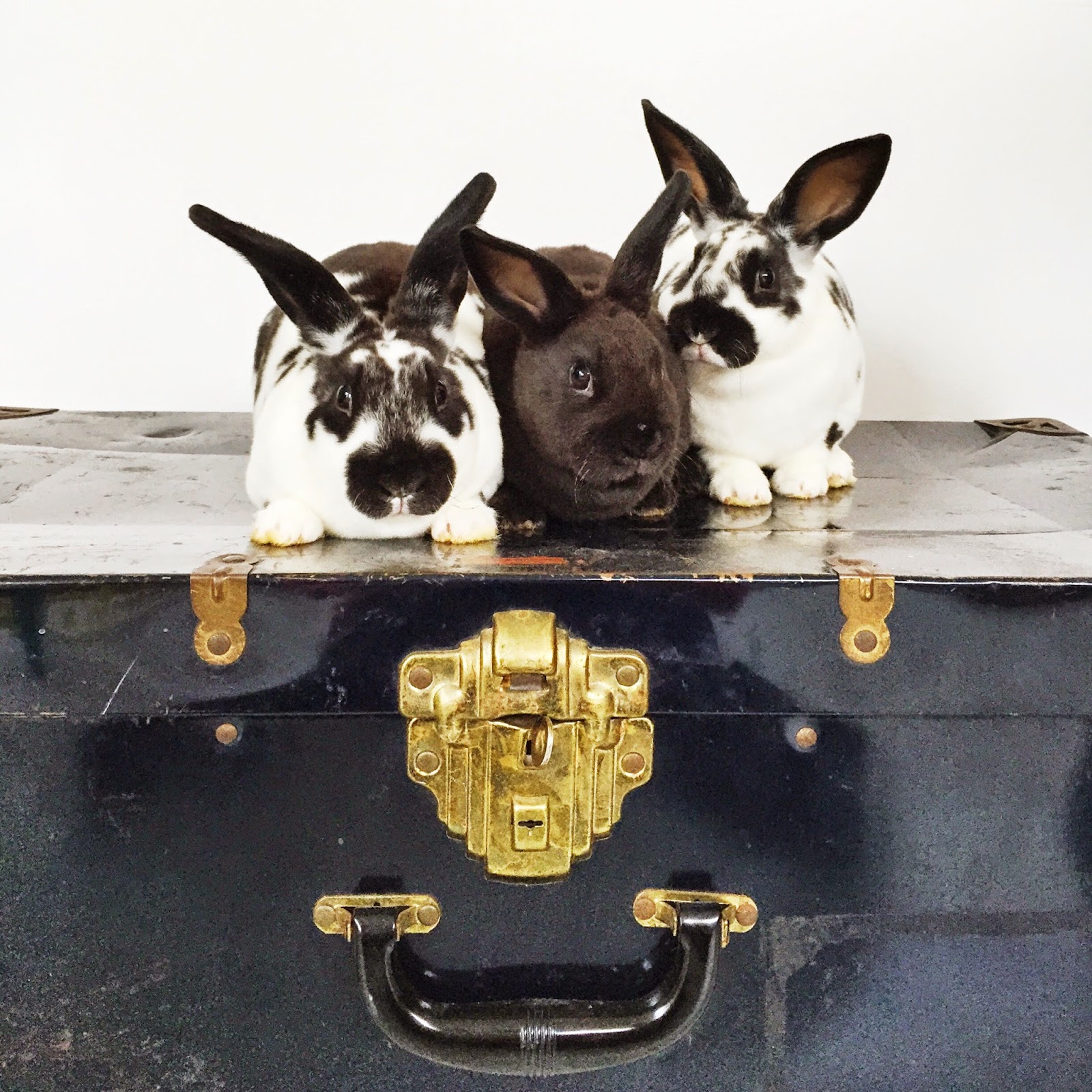 It happens alarmingly fast.  It's almost as if we should start each day resetting our perspective, taking a moment to remember the day they were born, or even when we were awaiting that day with such anticipation.  I imagine it would sprinkle a sense of calm and contentment over our minds as we feel frustrated or overwhelmed.  A new resolve, perhaps, to not be blindsided by the minutiae, to build the memories now, despite the everyday. 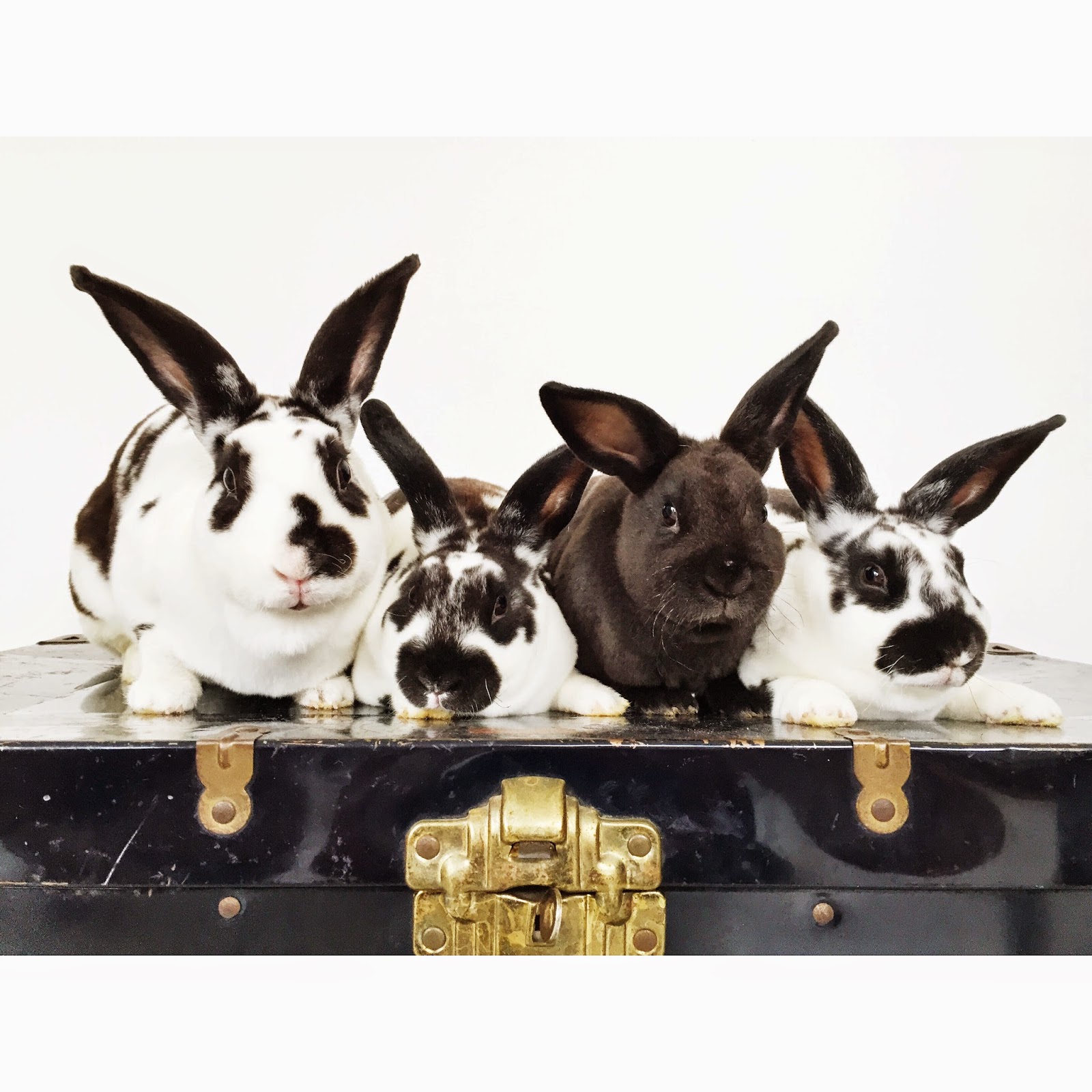 Meanwhile, anyone want a bunny? ;)