Welcome to G week!  It is rather fortuitous how the letters of the week for Sew All 26 have lined up quite nicely with the challenges over on Project Sewn.  And this week was such a fun one: Graphic Print! 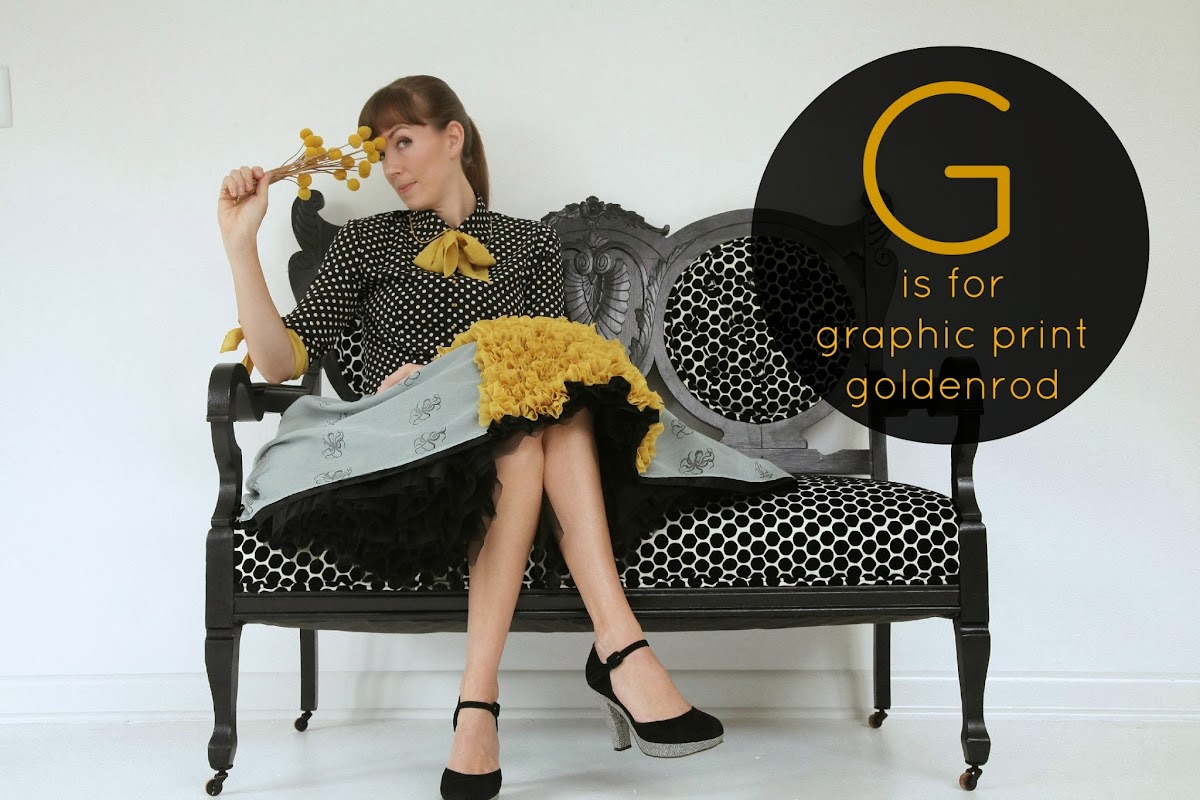 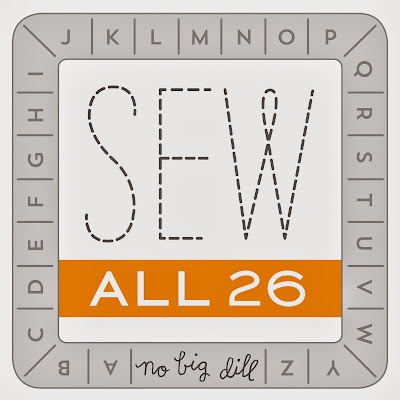 I usually start out with an idea of what I want and rarely does it ever happen that way.  I wanted to create my own graphic design, but the image, or rather stamp, changed several times until I landed on the octopus. 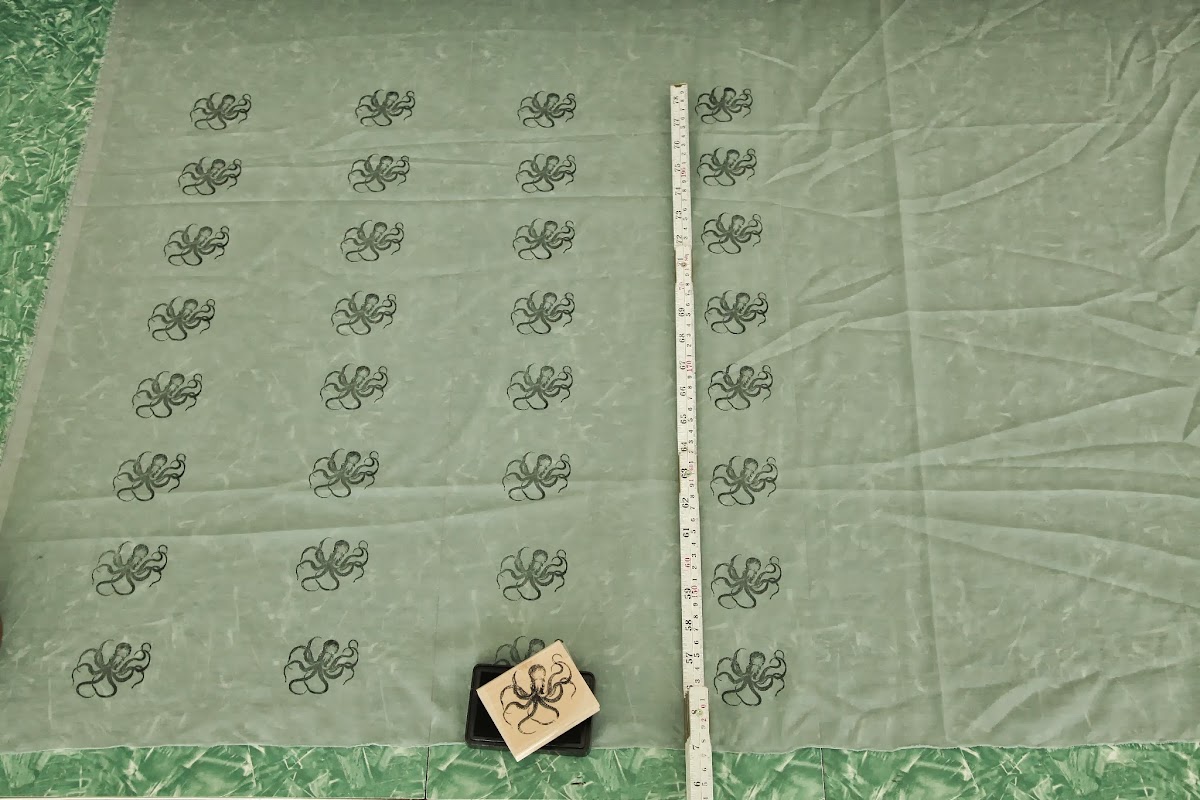 It gives more of a floral look, but on close inspection, it's a wild waving octopus!  I have a tutorial here.  It is so much fun to create your own pattern.  Test it out on paper first to see if you like it, then move to a scrap piece of fabric to get a feel for how the fabric will take the ink.  I've even made my own stamp before, a surprisingly easy thing to do, if you're unable to find what you're looking for at a craft store. 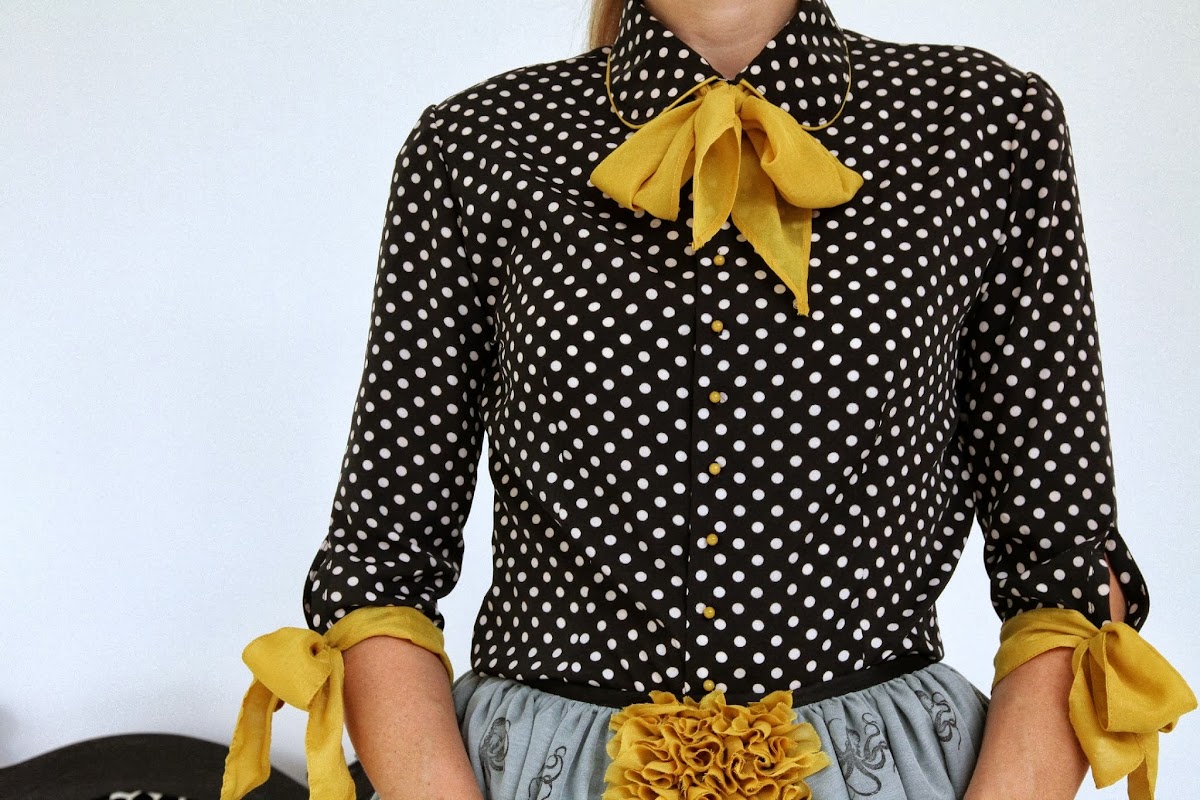 The top is partially from a shirt-dress pattern with simple darts for shaping.  I added the baby-ist of piping to the modified rounded collar and the tiniest of buttons (12!) down the front placket. 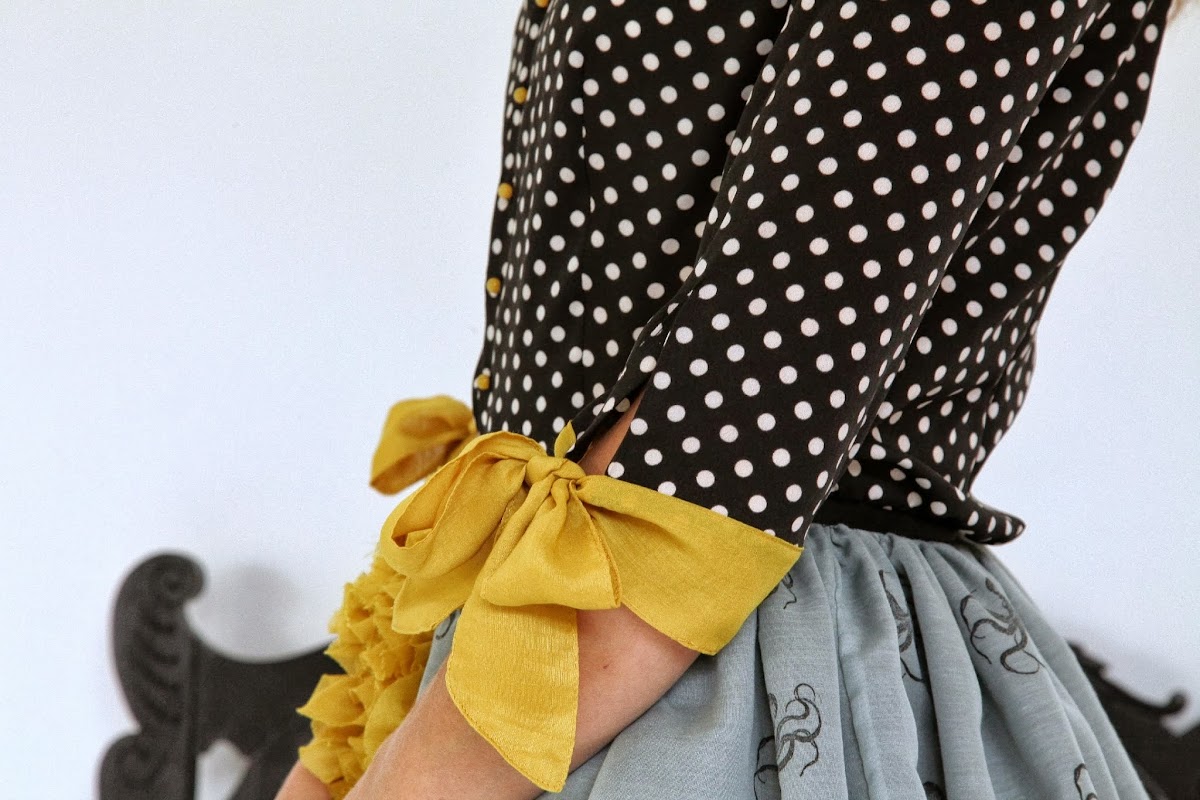 I shortened the sleeves and added a vent so I could add some...bows!!  It's a similar technique as my Abbey Road Top here. 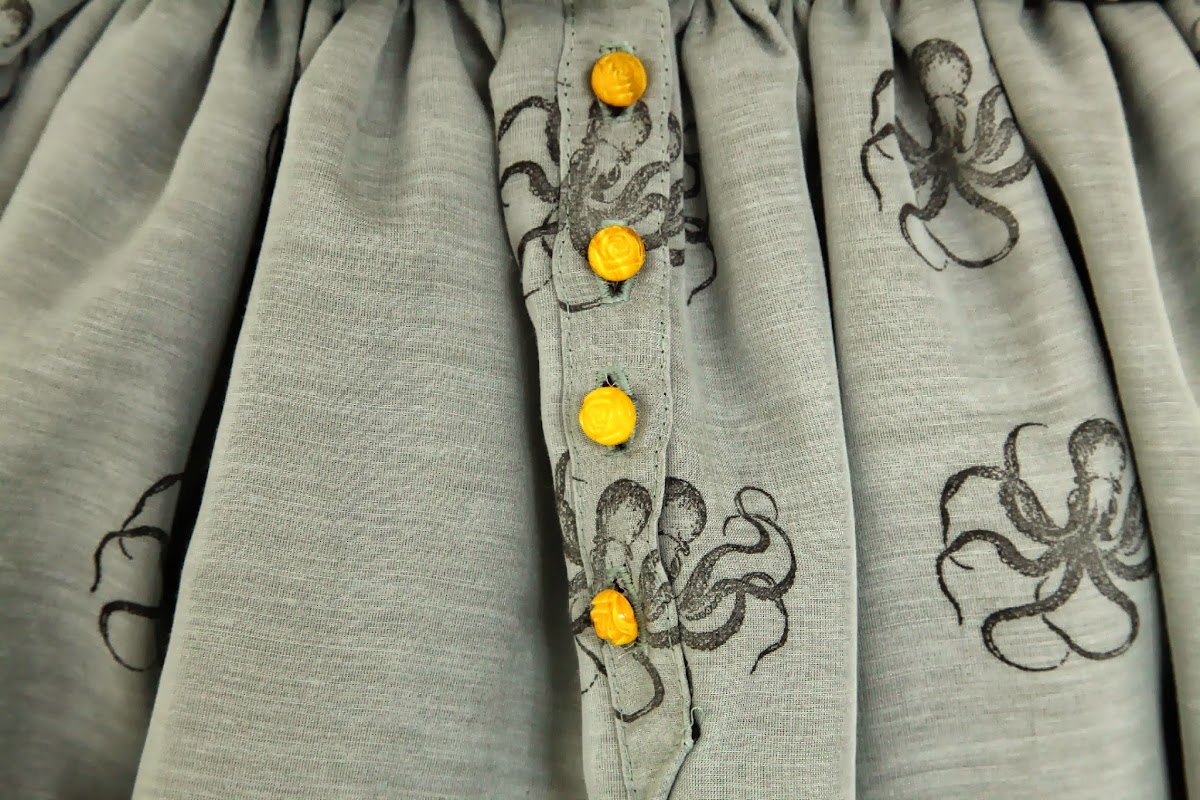 It worked out for the placket in the back of the skirt to get my octopi lined up because I cut out a strip of them for the front ruffled panel. 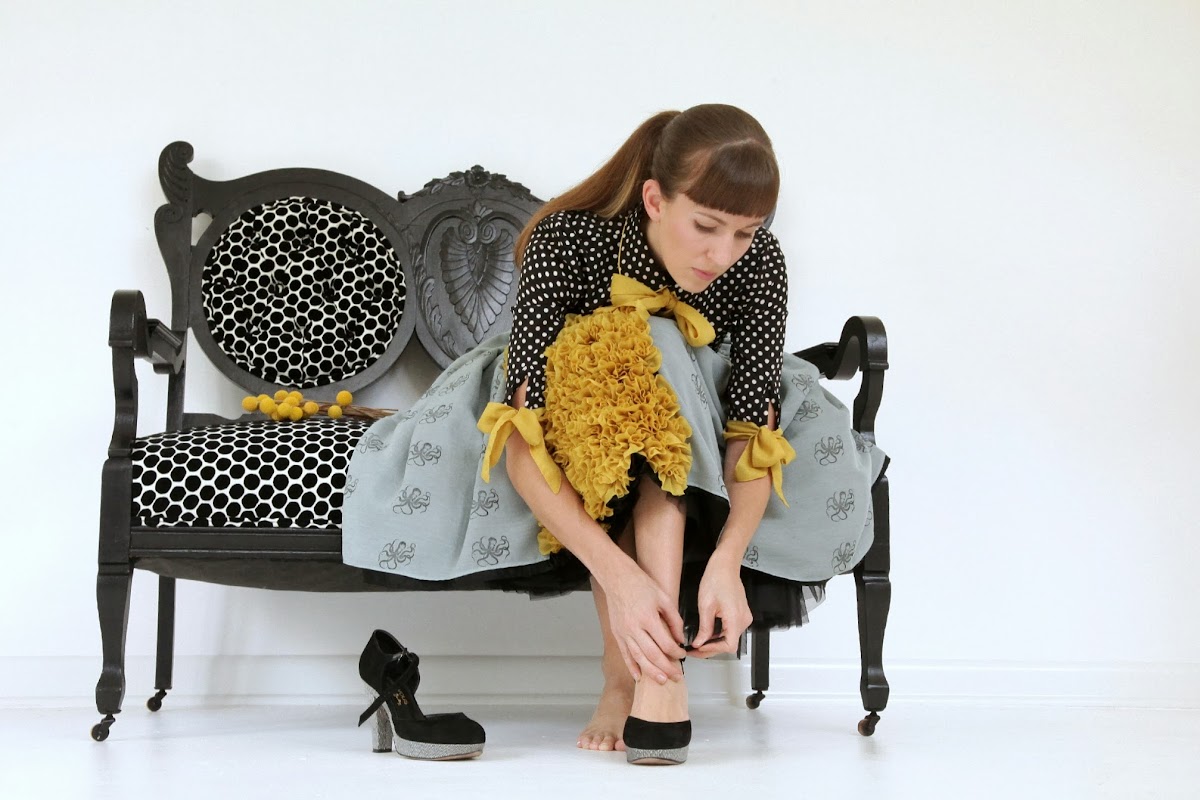 And the ruffles?! If you have never used a ruffling foot, then you are missing out on a great adventure.  Well, as far as sewing goes ;) I just ruffled strips of bias right down the center and then used my free motion foot to sew them on really close together in a maze-like pattern. 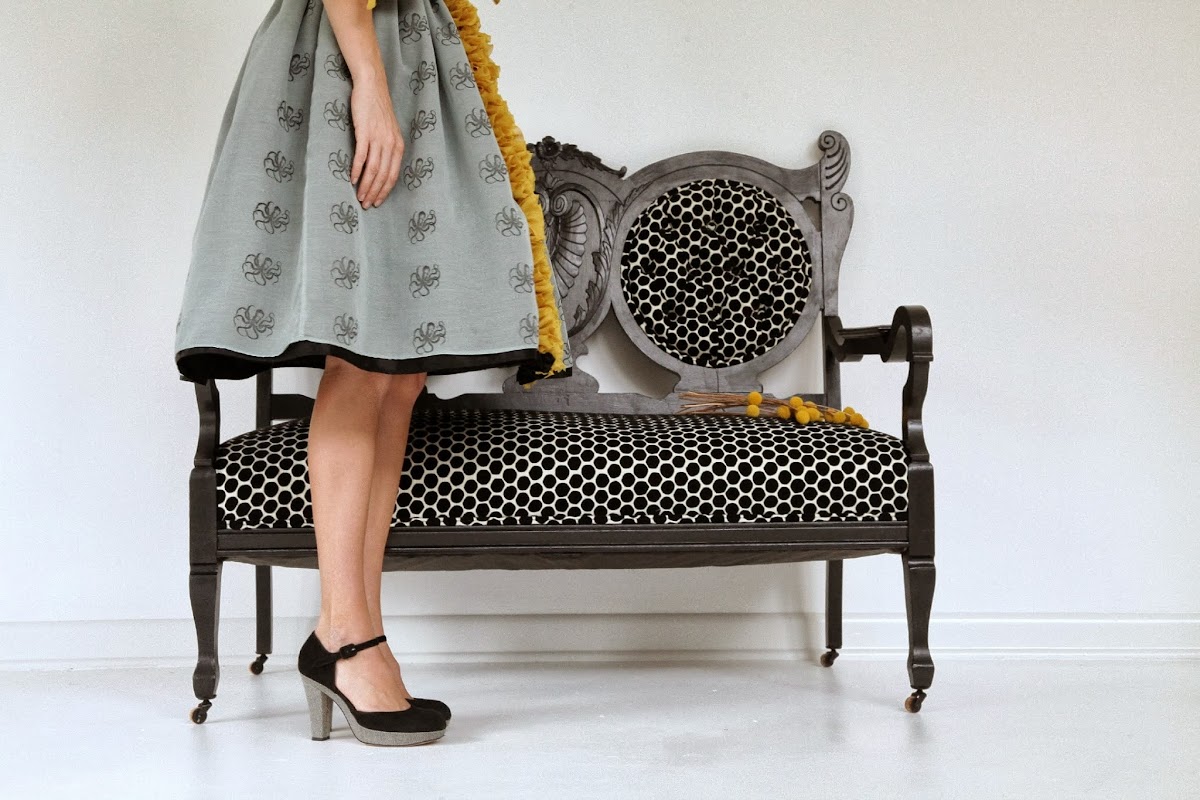 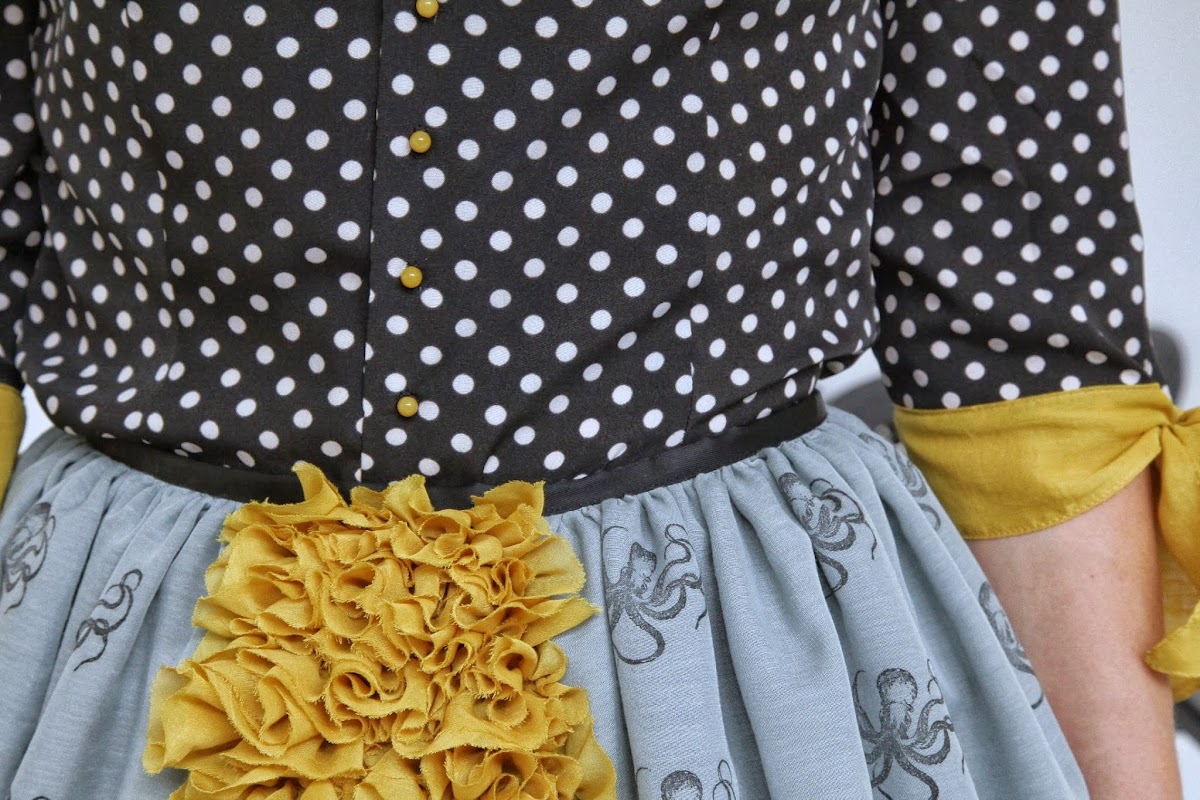 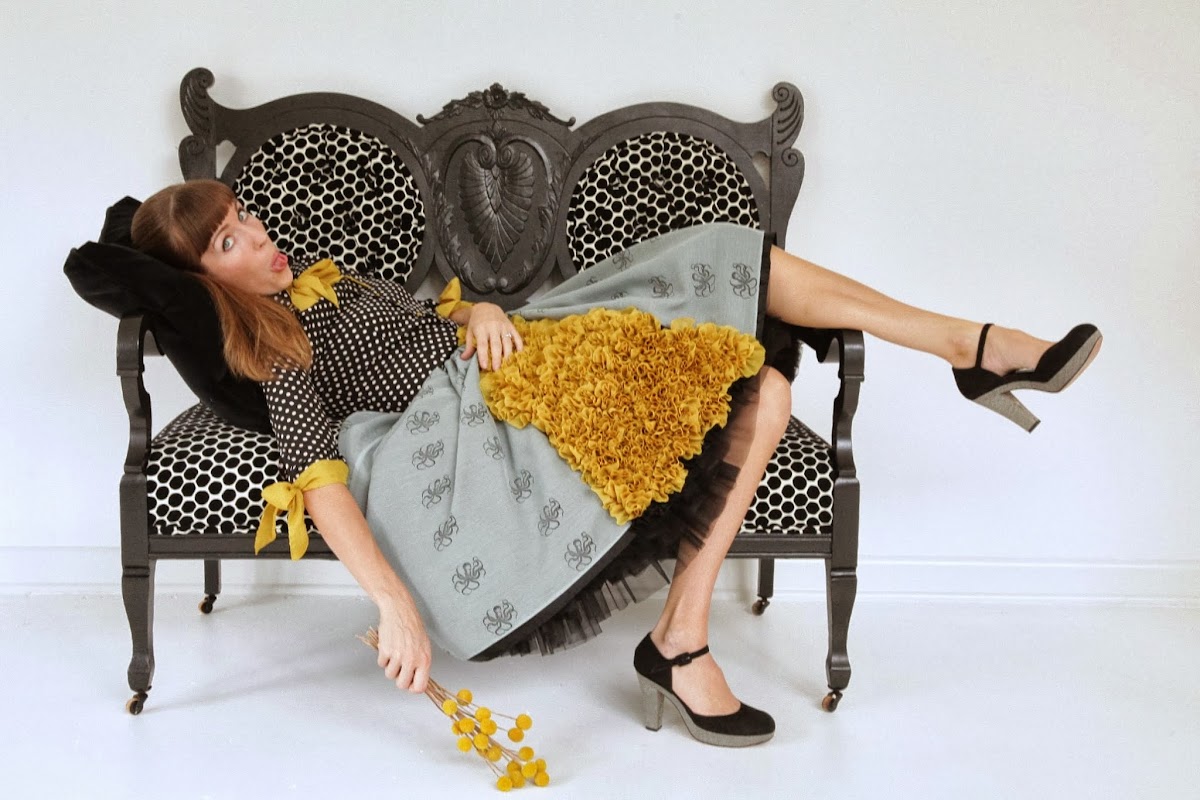 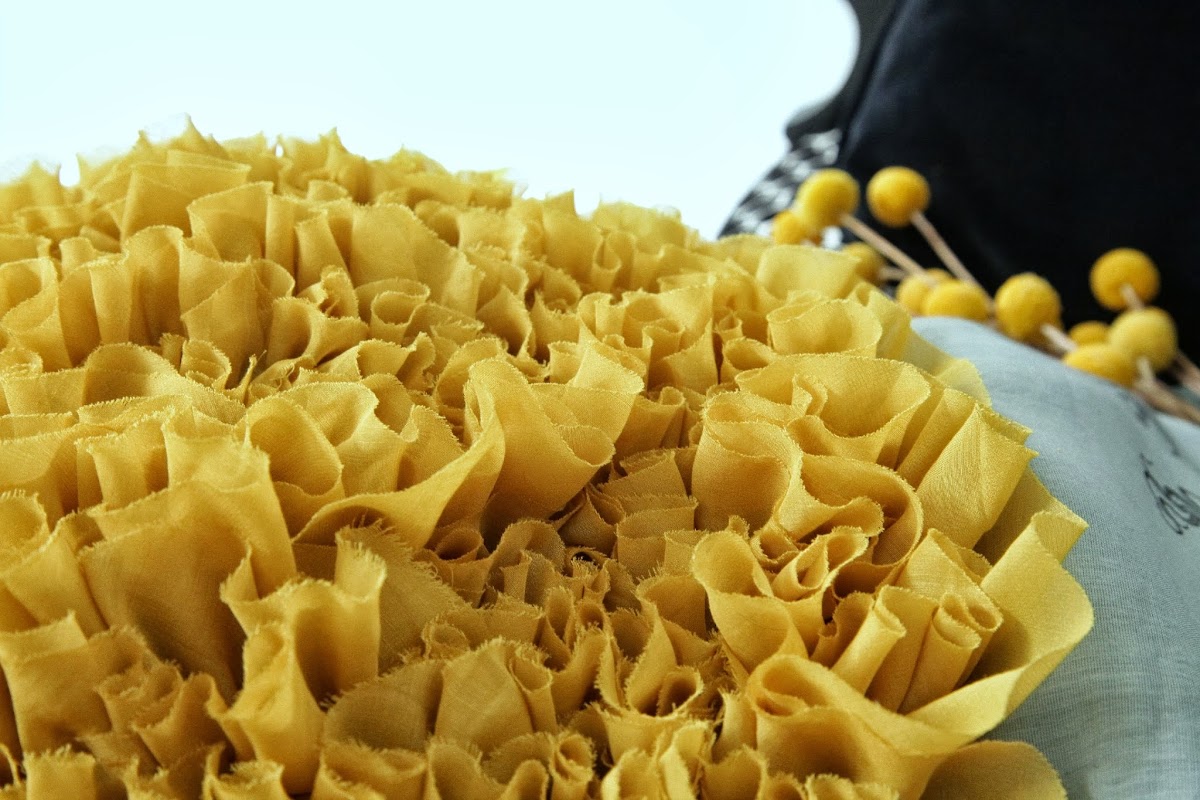 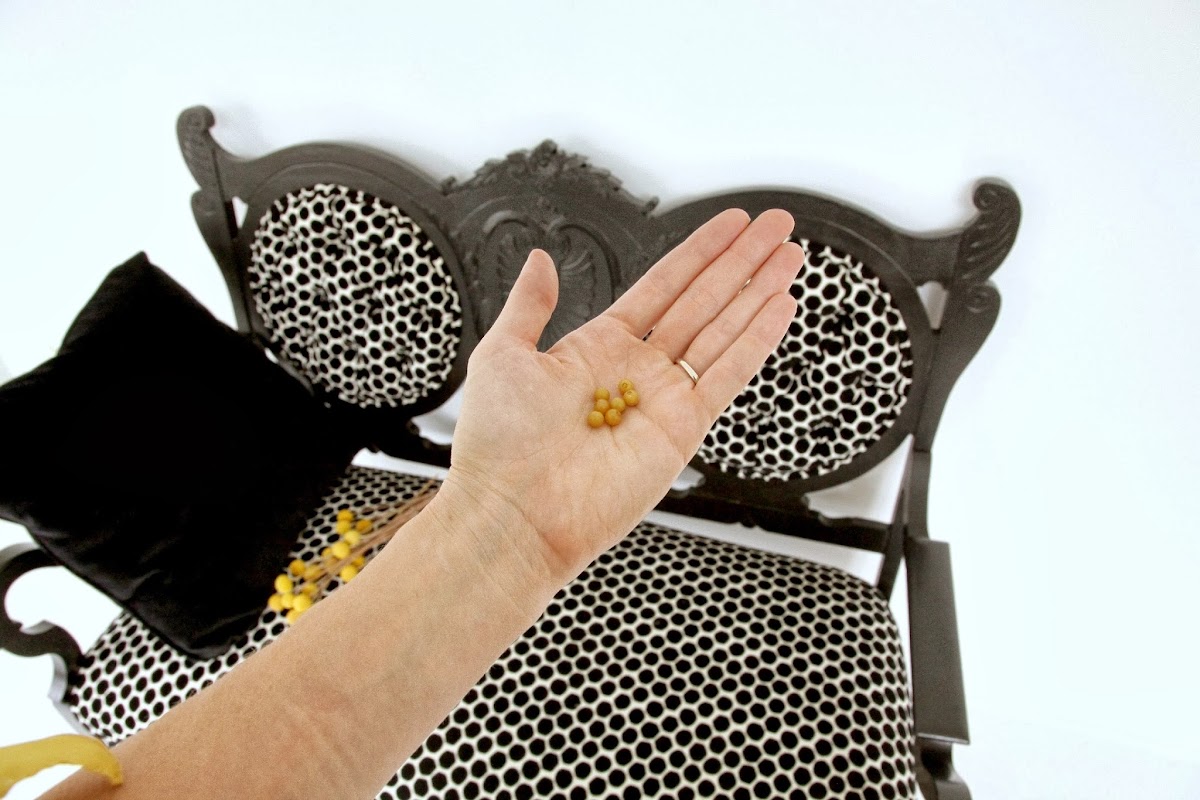 And we were happily shooting photos when the cutest little owl joined us.  He must have thought those buttons were food.  And before we knew it, 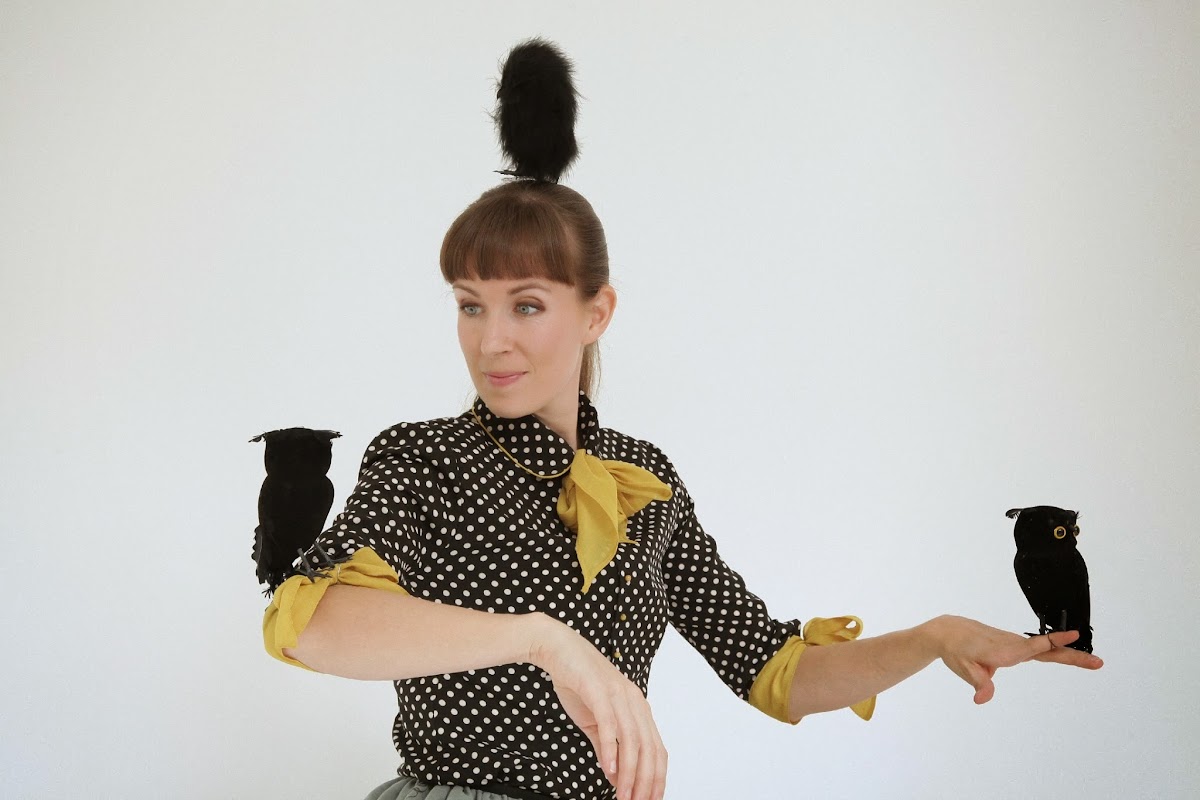 they were perched everywhere! 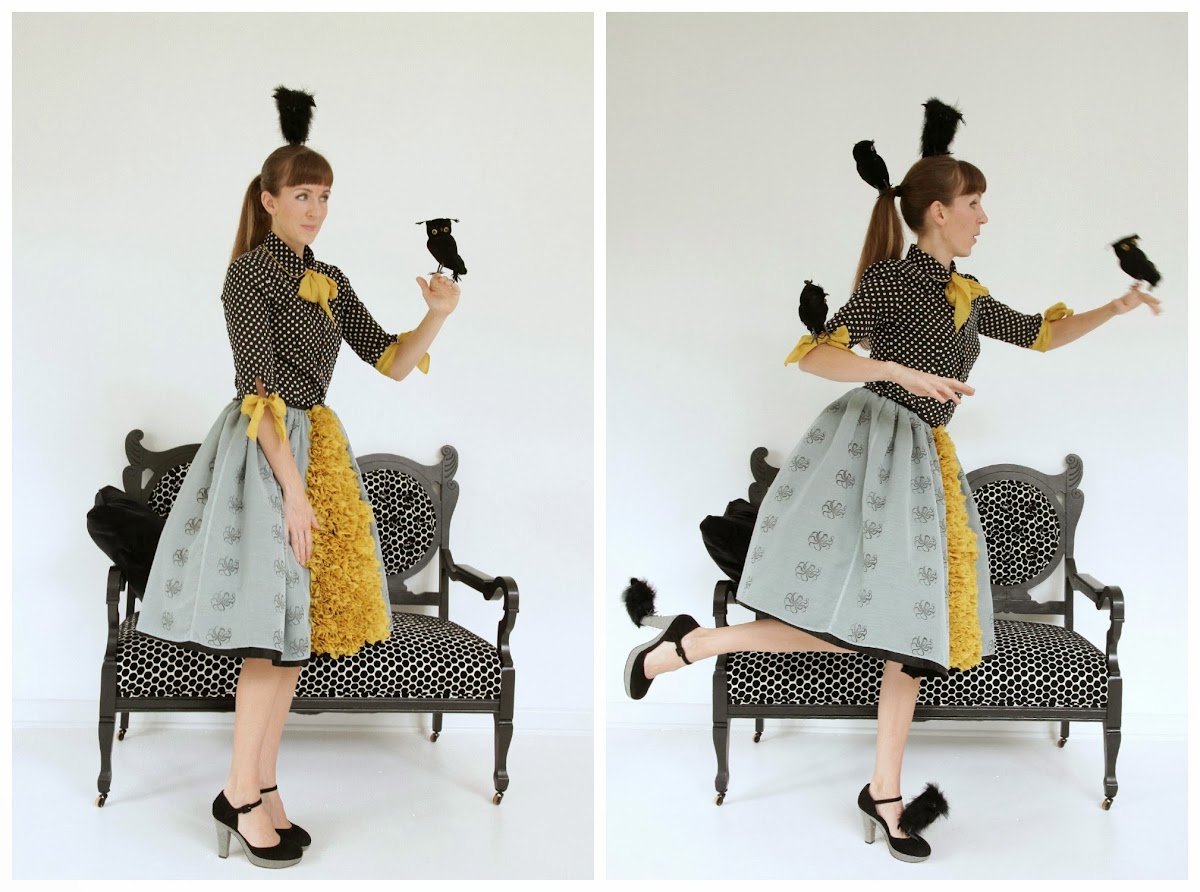 Hop on over to Project Sewn to vote for your favorite graphic print design!

Also, keep adding your Sew All 26 projects!!  They are fabulous, and I will feature some next week, so if you haven't linked up to the corresponding letter, make sure to add it soon.