D is for Dorothy and Double Duty

So, as it turns out, not blogging is really easy.  So easy, I was getting the swing of it quite nicely.  But then I caught myself saying to Pearl, who was complaining that school was too hard, that good things are hard.  Plus, as cheesy as it sounds, I've missed all of you, and sharing my sewing adventures with other sewing enthusiasts. 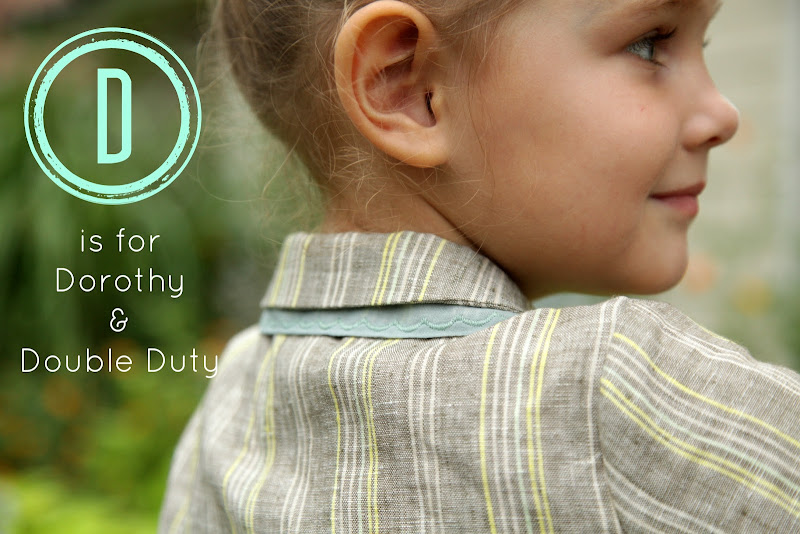 Cutting the corny short, I continue.  So, I guess I ought to carry on blogging, plus I'm still having fun doing Clover's alphabet clothes for her letter of the week at preschool. 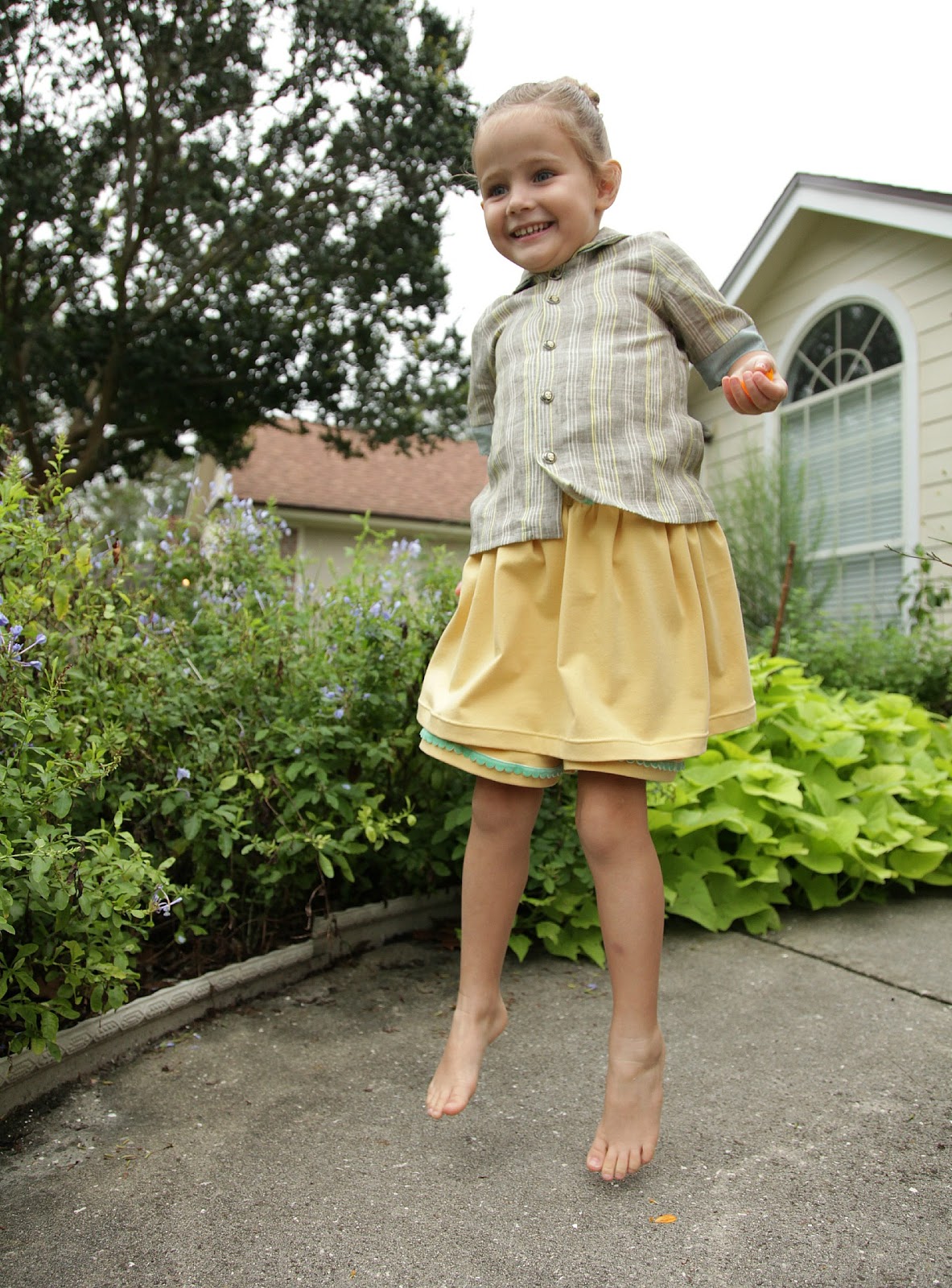 I was actually slipping in this sewing between, get this, sewing a wedding dress!  That's where I've been, my "little" brother got married last week and we are thrilled about the girl he chose. 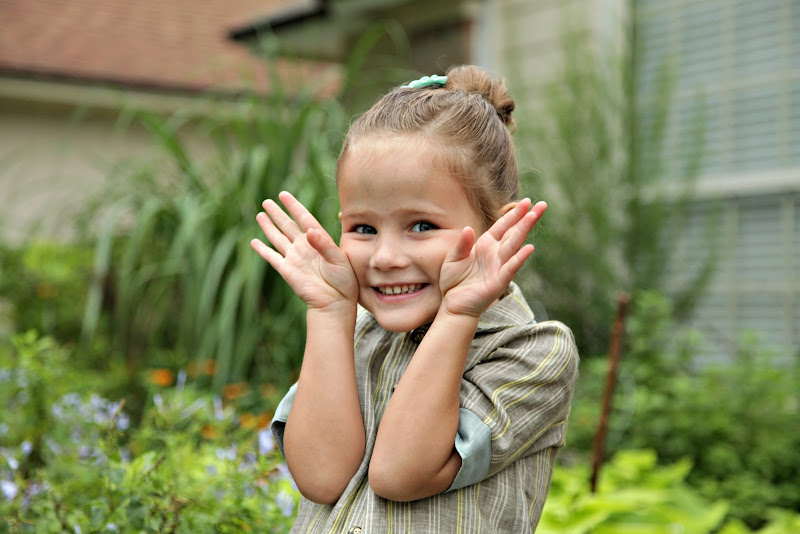 Oh, and you bet your booties I've got pictures to share, but before I get to those, I'm catching up on few things.  Like, I still need to pick a winner for the Pick Your Plum giveaway and this week is actually E week, so I need to get that post up as well. 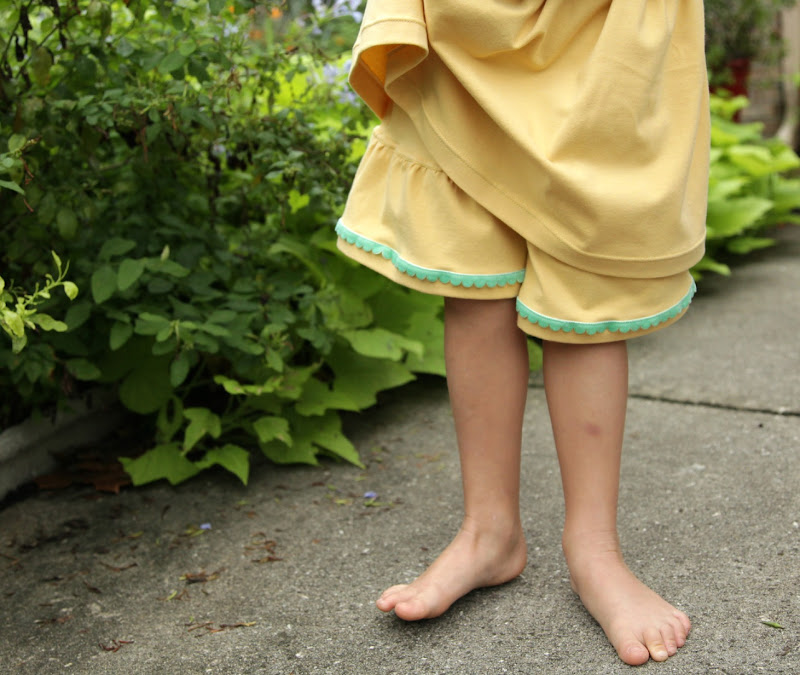 Design ideas for some letters come to me a lot easier than others.  D was the latter.  But, as I was rummaging through my buttons drawers (one of my favorite past times), I came upon my Dorothy buttons (which came from M&J Trim) and the double duty skort and double collar were wonderfully willing candidates to compliment the lovely Judy Garland.  Speaking of Dorothy, did you know her famous frock is coming up for sale?  If you've got a spare half mil laying around, it could be yours! 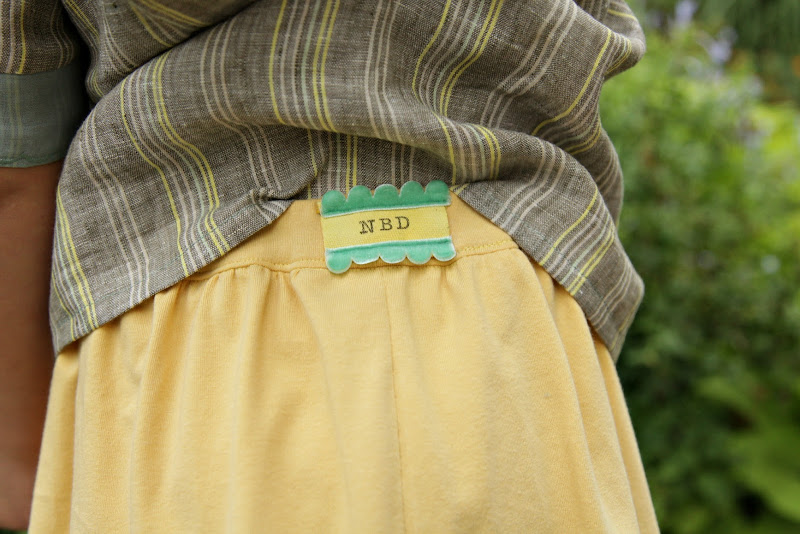 The week before D week, Clover and I watched The Wizard of Oz.  It's my dad's favorite movie, so I've an affinity for it as well.  I asked her what she was going to tell her teacher her D outfit was and she only said "double".  I asked about her buttons and she said, I don't think they have that movie.  I laughed and assured her that every single teacher at her school has seen it. She came home and said, you're right!  They have seen it! 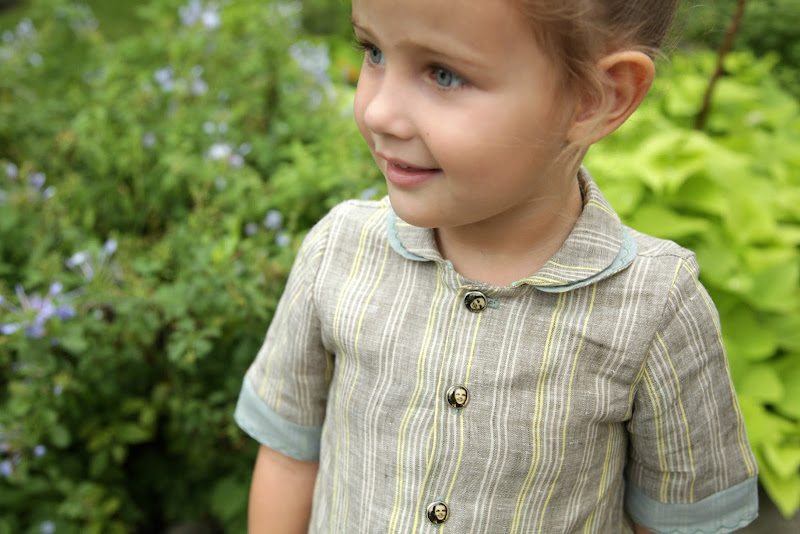 Both the shirt and skort pattern came from this Japanese book, and I didn't make any major alterations to the pattern.  I really liked how the shorts underneath the skirt were longer and the cuffs on them were gathered so it looks like a double skirt. 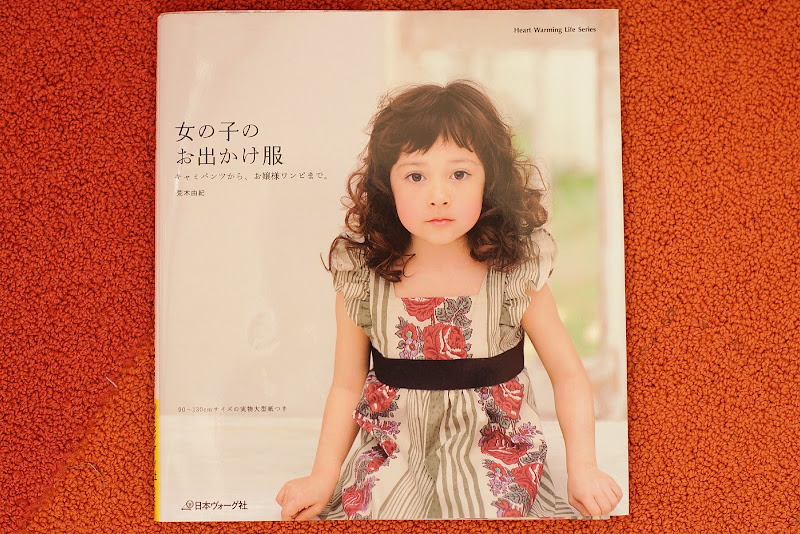 I did add a strip of velvet, scalloped ribbon to the inside placket after I realized that the serged edge would show a little bit at the top. 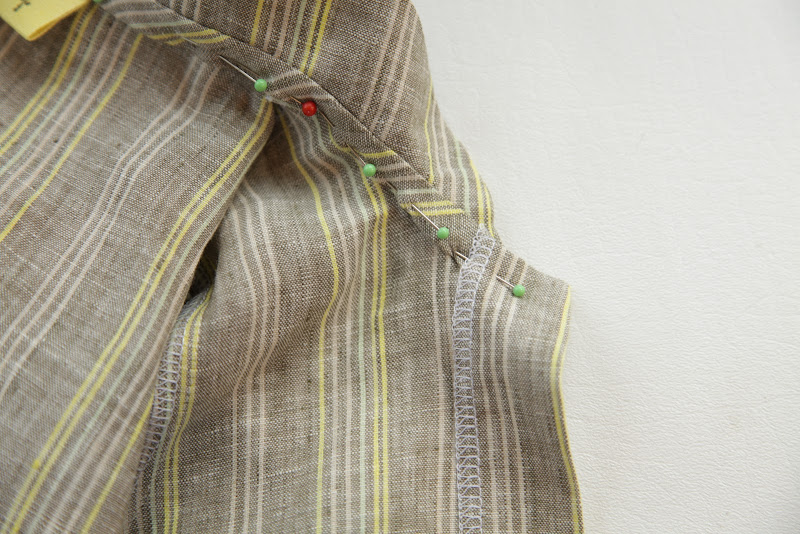 Easy peasy fix.  I also repeated the scalloped pattern with machine embroidery on the second collar and the cuffs. 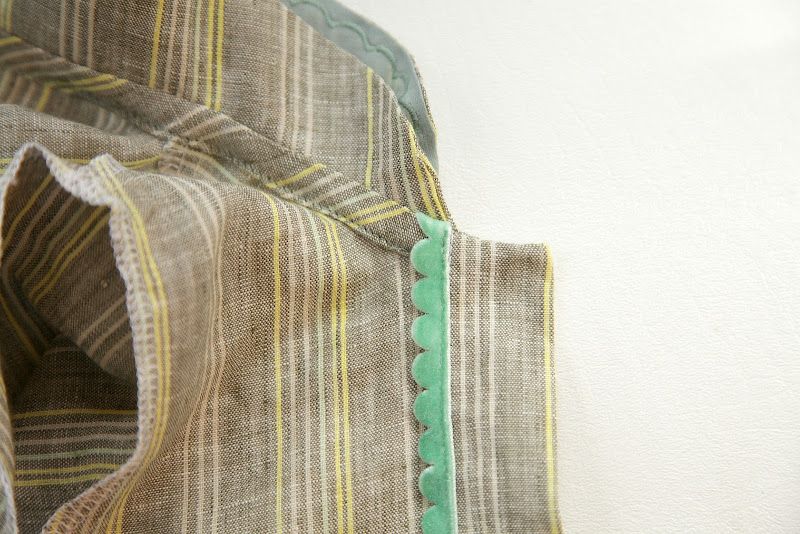 To make her barrette, I basted along the edge and slightly gathered the ribbon, hot glued it in a concentric circle on a piece of wool felt.  By gathering it slightly, it curves easily, so gather it more and more the tighter your circles get. 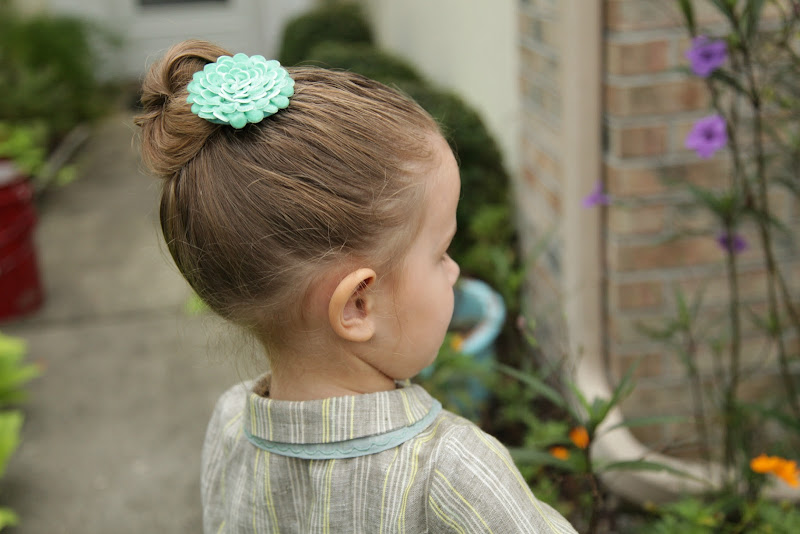 The striped fabric is linen and the skort was made from cotton knit.  Ryan told me I needed a new backdrop.  I said I would just step inside my photo studio.  Oh, that's right.  I don't have one.  So, please excuse the lame yard photos.  We are rushing right to school. 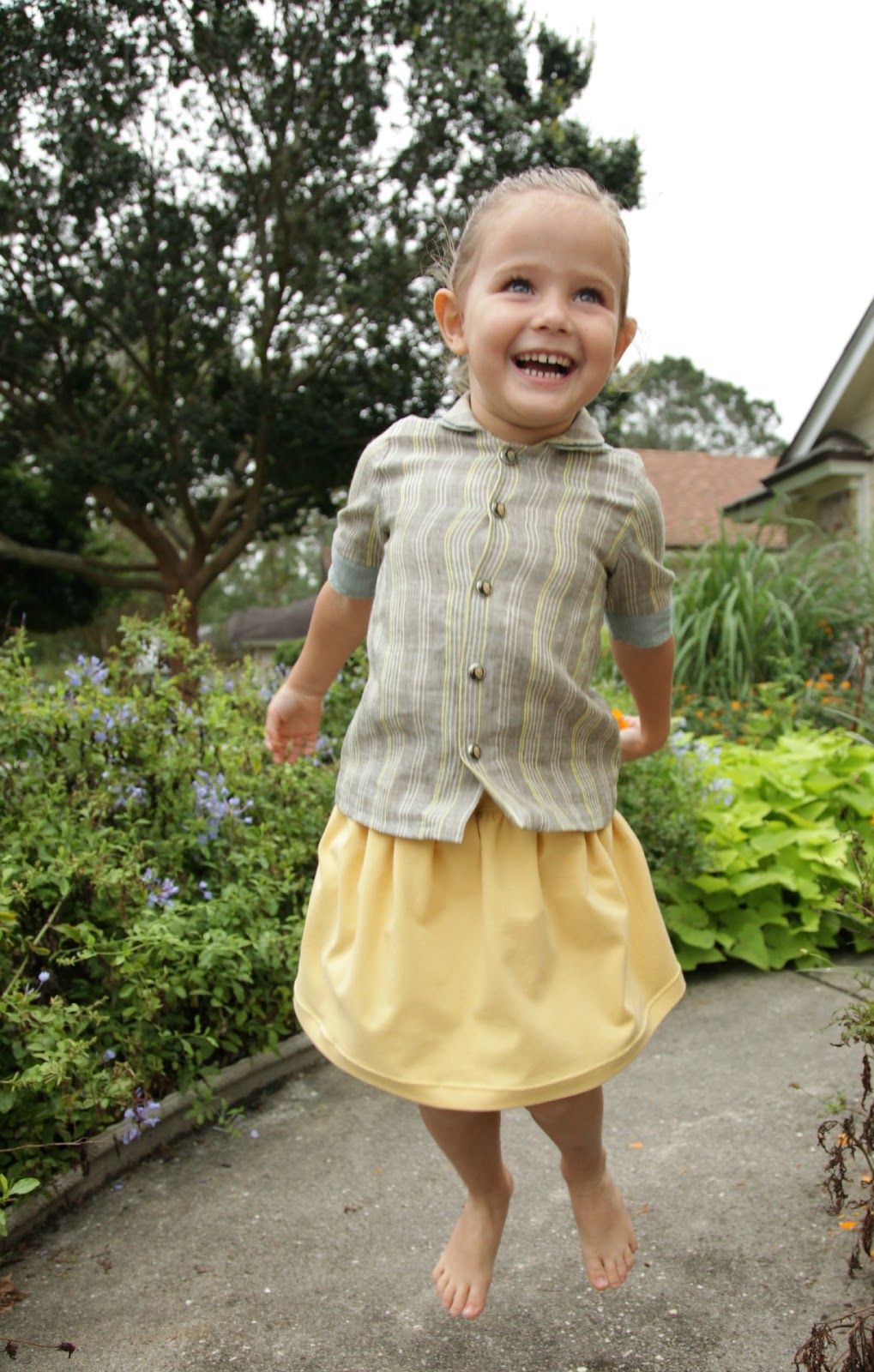 Brought to you by the letter D.
Created by No Big Dill