This is a sad and happy story, but you might call me the worst mom.  Every once in a while I'll take just one or two of the girls to the fabric store with me.  Recently I went to a little local shop and was talking with the owner.  I had Olive with me and she went off to play with the owner's granddaughter.  She came running up to me and asked if she could pick out some fabric.  Thinking it would keep her busy for a while, I told her she could pick out one.  Before I know it, I hear two little girls giggling and see Olive with a stack of bolts towering above her head.  That girl.  She had bolts of sparkle, glitter, and Asian prints.  We negotiated and decided she could choose her very favorite.  She picked out bowls and chopsticks and wanted a "big" Japanese dress.  I wasn't a huge fan of the print, but when she gets her big eyes and rainbow brows on and I can't resist.  Really.  When it comes to a child of mine being excited about fabric, I have negative will power.
Well, I must have had her try it on over her clothes, because when it came time for the final fitting, it didn't.  Fit.  The girl is a toothpick.  It fit Pearl like a glove.  With a heavy heart, rather with two heavy hearts, a few tears, we talked it over and decided I would make her a new dress, but that she got the better end of the bargain since she gets to wear this one, too, when she's a bit bigger.  I've almost complete her new one, and she's happy.  As I was down to the hand stitching, I realized I didn't have any frog closures, I almost made a mad dash to buy a couple when I decided that surely I had something that would suffice.  I think I might have been more excited than the recipient when I conjured my very own frogs (which was a question on Jeopardy the other day...about the only one I got right!)  It's so satiating to mock the voice that tells you to spend money when you're able to work with what you have on hand, and not just make it work, but really love how it turns out.  I might have even said, to nobody in particular, I am gooood.  (Perhaps I went a bit overboard.) So, what does a girl do?  That's right, Tutorial with a capital T.
The size of the frogs (or flowers) will depend on the size of ric rac you use, as well as the length.  This is fairly large (although there is jumbo ric-rac--ever seen that mammoth stuff?) and it is also chenille, but the regular ol' ric rac will do just fine.  Cut a piece so you have 7 full "humps" on top and 6 full "humps" on the bottom.  Double thread a needle because you're going to be pulling on it pretty hard.  Follow the diagram above and then end by threading it through the first couple of humps.  Don't cut your thread yet. 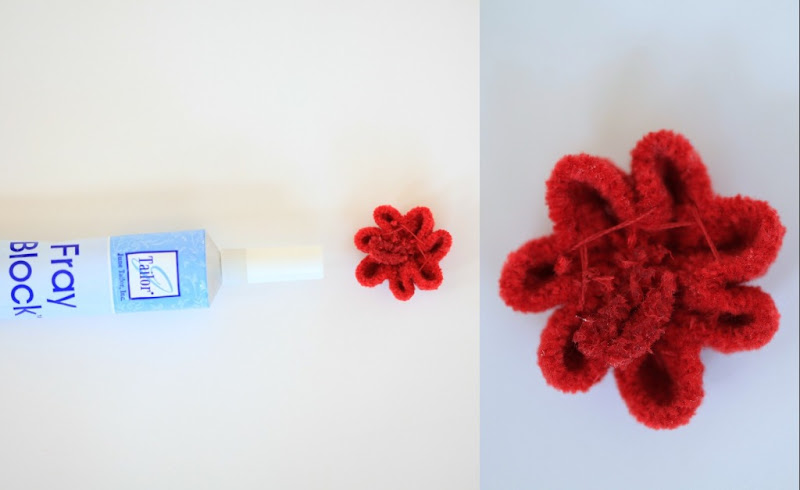 To complete each flower, you will need to treat the edges with Fray Block or Fray Check.  Next you're going to stabilize the flower just a bit more by loop stitching around through each low point (the ones facing the center.)   If these are working frogs, just fasten one side of the elastic.  I just used the small hair elastics I put in the girls' hair.  If they're not the closure for your garment, just hot glue them on.  Just kidding.  Hehe.  Sew them onto the fabric along with the flowers, securing the center together with thread.  That's it!
Pearl looks stunning, I think, plus she whipped out her birthday fan--her idea.  She was wearing it for the photoshoot when we had to run Mr. Drummer to the pediatrician's and the doctor said she looked like she just came from the red carpet.
I started with a pattern, but got distracted with baby piping and frogs, and gathering and petal sleeves....
I think it would be super neat to do a whole bunch of baby frogs down the back of a dress.  That might be next.  Unless I get distracted by something else.

By the way, the last time I let Pearl pick out her favorite fabric, do you know what she brought me, all stacked up and teetering on her arms?
Animal prints.  I'd rather work with chopsticks.
Created by No Big Dill