Is it fair to say that this dress is my favorite out of all 5....4 of which I've yet to make?  It began with a pattern from Ottobre [yes!  I finally have my very own subscription!].  The purple dress is the one I used as my starting point. 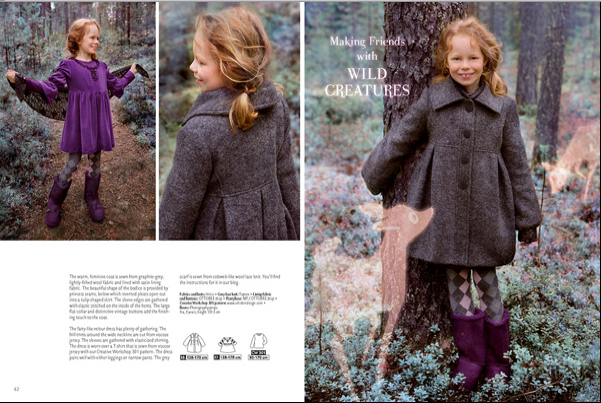 You'll recognize the sleeves, but I changed everything else.  Divine's dress is made from a cotton with a bit of a stretch.  I don't recall where I purchased it, but I've had it sitting around for some time now, waiting for the perfect project, of course. I took out the gathered waist and just made an a-line silhouette.  There are no closures, as the neck is plenty big for easy in and out.
The hood began as an oversized collar that draped down the back.  Ryan suggested I just make it into a hood--so glad that man is here to throw ideas around with.  I took a basic hood pattern and altered it with a section in the front to go across the entire neckline, made it into three pieces instead of two, and added more fullness in the back. Get this.  It's made from a stretch. pleated. satin.  The most voluptuous fabric I have worked with [the kind you want to bathe in].  It was just as difficult as it was beautiful.  In fact my sewing machine almost refused to recognize it as fabric.  I had to basically feed it through the foot myself and there were one-inch gaps where it was not sewn [stubborn machine, though normally so easy-going].  DIFF! IH! CULT! Butohsobeautiful.  I lined it with a black sheer.
Did you recognize the mini-Girdy Belt?!  I took an inch off the thickness of the belt and the top piece so it is just 2" finished instead of 3" for an adult.  I did learn something making it: all pleather is not created equal.  This was half the price of other faux-leather I've purchase and it was not cooperative at all.  It was almost stretchy and contorted instead of staying still.  I almost scrapped the belt, but it did conform a bit more once it was wrapped around Divine's waist.  It might be useful to have a more fluid faux-leather in a different project, but the belt needs a very solid, thick piece of fabric.
A side note: little girl's full-length slips are not so easy to find.  I finally found a cheap one at Burlington.  Cheap in price and quality--I fully expected Divine to complain that it was too itchy and hurt, but she didn't.  Still on the lookout for a soft, silky one.  Any suggestions?

Divine was completely in love with the outfit.  She kept repeating, "cool!"
I couldn't decide if I like the belt with the bow in the front or the back.  I'll leave it up to Divine how she wants to wear it.

Did you know they still make crimpers?  That might have been Divine's favorite part ;)
one down.
Created by No Big Dill