There was lots of discussion this weekend of pets, mainly why we are not getting any.  Reasons, many of them, were given as to why:  they are costly, they stink, they're dirty, they're a lot of work, we like to travel, daddy is allergic, they're noisy (now you're wondering why you have one).  We concluded that a horse would be so perfect to have.  We could keep it elsewhere, use it as recreation and companionship and a way to teach responsibility, but, of course, we can't quite fit that in the budget.  Pearl especially asked Ryan to compute how much money it would require.  Together they estimated $7,000.  I really have no idea if this figure is accurate or not, but it gave her a number, which is what she wanted.  She likes facts.  She likes concrete answers.
Everyone began to chime in as to how they could help earn money to reach their goal.  First Pearl decided she was going to earn money singing.  She popped in Ryan's ipod and began to practice.  Then she decided that wasn't going to produce results fast enough, so after we returned from Jekyll Island, she decided to go into business with Divine.  They would earn money by selling painted rocks, just like grampa did when he was a boy.
They got to work gathering rocks and supplies.  They set up their studio on the driveway.  They retrieved the money box (my siblings will recognize it from our childhood) and filled it with money they might need for change.  Painting smocks donned, they got to work.  At first they offered 1 rock for $.25, but I pointed out that nobody would buy 2 rocks for a dollar at that price.  Pricing was adjusted.
A grand total of $4 was made by the end of the day.  Ryan bought two, I bought two, Olive bought two (though as I saw her rushing out the door with the dollar clutched in her hand I offered to treat her to the rocks), and a kind neighbor (who also attends our church) bought two.  She'll be blessed. 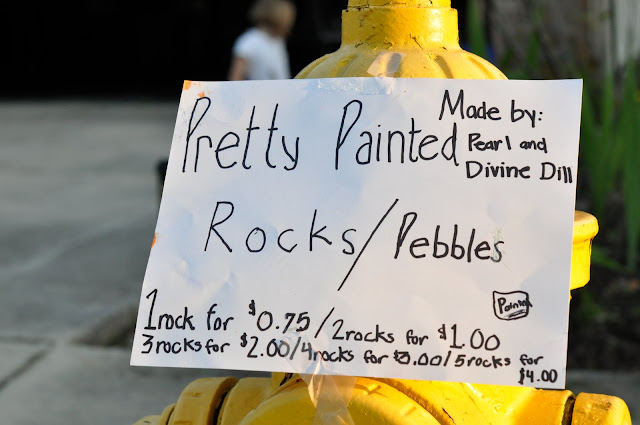 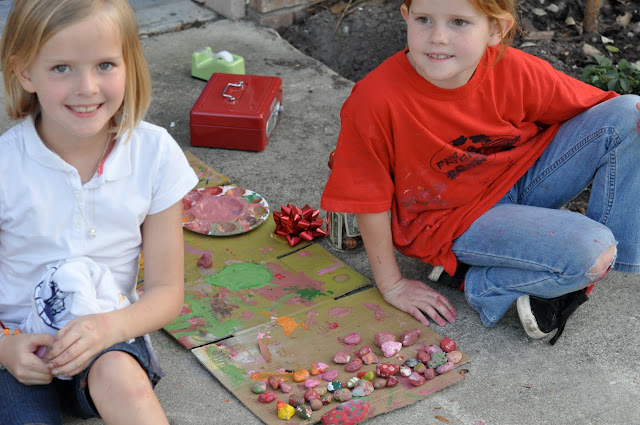 They mixed a bit too much pink paint.  I told them they needed more variety.  They're working on it.